A bit more work on the WW2 Soviets - this is a group (company, I think?) of IS-2 heavy Soviet tanks. The tanks are a box set from Battlefront, and the bases are from Warbases in Scotland.


Armed with 122mm guns, these lumbering beasts are set to blast their way through the German lines and into the heart of Germany itself.  Often seen by us gamer types (myself included) as the Soviet antidote to the heavy German Panzers like the Tigers, I think these tanks were actually more about breaking through the front lines, equipped with very heavy weapons and pretty heavy armour on the front, these things are ready to blast the enemy infantry and AT guns at point blank range. 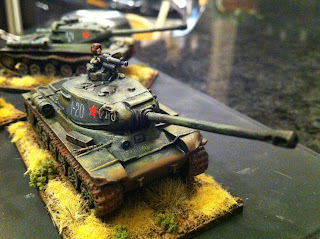 Most of the rule sets I have seen talk of the 122mm gun as an inferior to the 88mm German guns.  It might have a heavy shell, but the combo of lower-grade optics, muzzle velocity, power etc. made it a slightly less effective gun for tank duels.  Maybe. But I wouldn't want my ride getting tagged with a 122mm round... 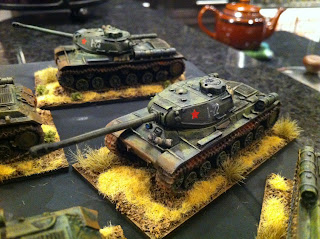 I love these models - they scream late war Eastern Front, one of my favourite gaming periods. Battlefront did a really good job on the kits.  They have lots of little details, like bent fenders and wash cloths.  There is a nice set of decals. You even get little rare earth magnets to mount the turrets. The only problem was the turret cupola MGs - they did not include any versions with the hatch closed.  A pretty mild "problem". 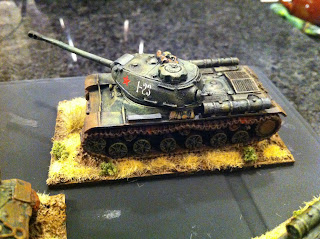 These would have been nice to have for the Analogue Hobbies Painting Competition, but the tanks were in fact painted quite some time ago - I finally got around to basing them to make them consistent with the rest of my 15mm WW2 stuff.  So no points for these hulks. 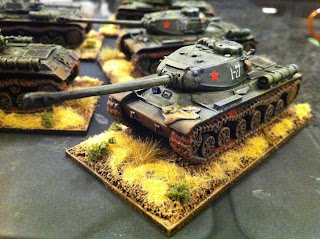 My WW2 Soviet collection is starting to come together.  A company of infantry, an SMG platoon and some HMGs.  Heavy tanks, a platoon of T-34s.  Stay tuned for more to come.
Posted by Greg B at 9:59 PM

These are gorgeous. I'm a huge Eastern front fan and I love the desperate German defense facing off against the unstopping wave of equipment and Men the Soviets had at hand. Most of my Germans army is based of their fallback.

These are great, I thought you had done the damage to the body work, so top marks to Battlefront. You really paint up tanks very well

Thanks guys.
@ Chris - yes, the late war Eastern Front is a great period for gaming purposes.

@ Ian - agreed, credit to Battlefront on this set. It is really well done.

Now that's a some proper armour! Lovely paintjob, they really look like they mean business!