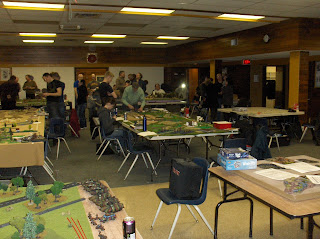 LegioCon is a long-running local wargames show masterminded by Bryan and Garth of Legions IV Hire and Maxx Collectibles, respectively. The businesses are local retail establishments that cater to historical wargamers and cardgame/boardgame/tabletop gaming types here in Winnipeg. LegioCon is staged at a local branch of the Royal Canadian Legion that has a lot going for it, not least of which that it is licensed and serves cheap draft beer ;-) 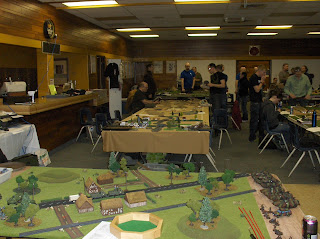 Conscript Greg and I rolled out to the show about noon on Saturday to put on a WW3 game featuring Bundeswehr vs. the infamous Chemical Commies. I set up a pastoral setting with a small German village dead centre in the table. 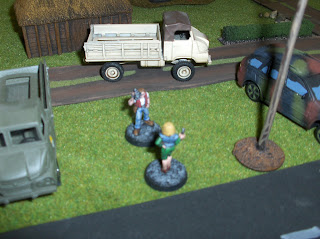 The Bundeswehr had bivvied in the village with a convoy of trucks. The local Fuchs News/Deutsche Welle affiliate had live reporters on the scene. 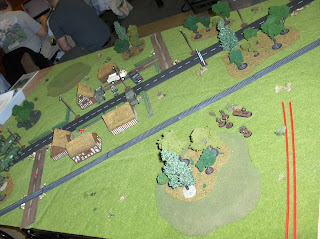 The German objective was to exit the trucks off one of the short table edges (their choice). The Russians were more numerous but had to split their forces, with half their strength deploying from each short edge. 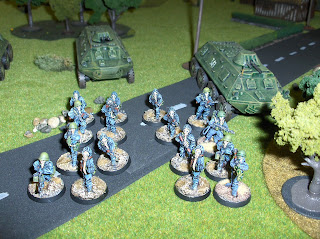 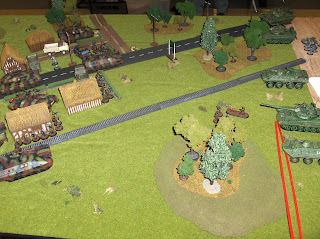 Initial dispositions. I know it looks like the vehicles are insanely close together (they are) but for convention games we like the opposing forces to get into action right away, both for time management purposes and to hold the interest of the people playing. On Saturday we had two very cool walk-ups, Ray and John, who played the game along with Greg and me. 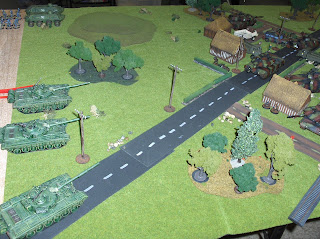 Greg's T-80s face off with Marders and a Leopard 2A6 at middle extreme right. 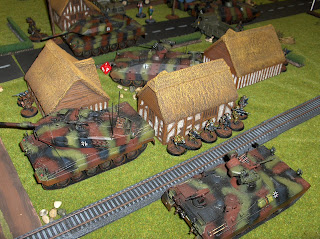 Facing the other short edge, the tanks deployed to support the trucks (carrying Kraftwerk master tapes, Helmut Kohl's adult film collection, or some other cargo vital to the continued existence of the Bundesrepublik) in their mad dash off-table. 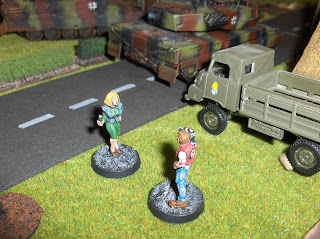 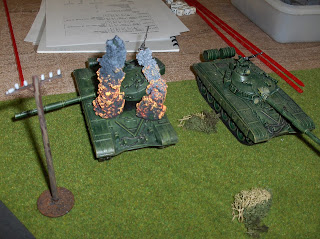 We used our proprietary "Red Storm!" ruleset for the game. It's very fast playing and stuff blows up good, typified by the result when Ray's T-72 went head-to-head with a Leo 2A6... (Ray had been warned by Greg that the T-72s were somewhat cupcake-like in terms of toughness vs. the Leo...) 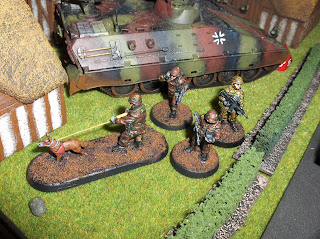 Bundeswehr command group mit hund. 2IC has iPhone (back row) while the Oberleutnant has upgraded to an iPad (front centre). Soldier with assault rifle carries a Samsung Galaxy S in flecktarn holster. 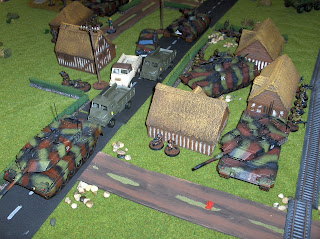 Trucks begin to roll out of the village. Snipers are in the building at centre and did nothing for the whole game, although true to form for the "cool models" they will likely report back that their presence was instrumental to the win... 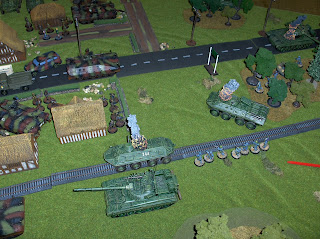 Meanwhile, on the other side of the table, Greg's T-80 is knocked out on the road along with two BTRs. Commie infantry has deployed along the rail cut and exchanges fire with the BW troops behind the hedge. 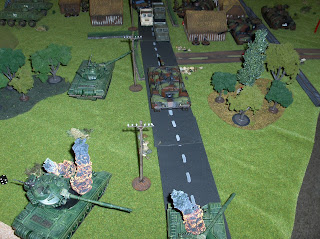 Ray's T-72 angles for a side shot on the Leopard; he's already knocked out its main gun. 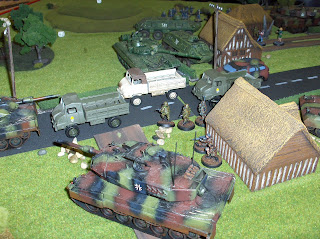 Second Leopard moves out. BW infantry move to support the truck convoy; the Russians had to take the convoy with infantry models as opposed to blowing them up. 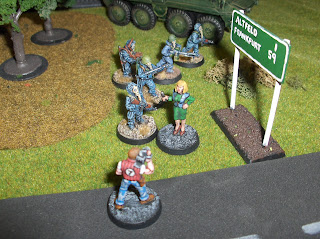 "I'm here with Lieutenant Ivanov of the 322nd Motor Rifle Brigade just outside Altfeld. Lieutenant, your squad has just been decimated by Bundeswehr 20mm automatic cannon fire. How are you feeling right now?" 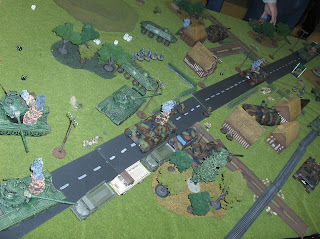 Trucks manage to sneak past in a conga line. Ray just missed winning the Priority roll that would have allowed him to block the convoy with his T-72... 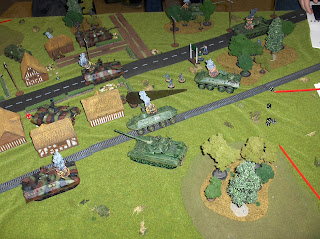 A table full of burning vehicles is the sign of a fun game. Thanks to Ray and John for playing our game, and to Greg for bringing out his awesome Commies and the explosion markers (and for the beer :-)  Roll on PrairieCon in June!! 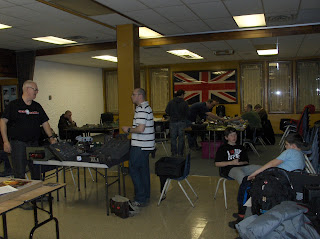 There was also a bunch of other games going on, including a Flames of War tourney and 40K gaming... but what I really wanted to show you is this... 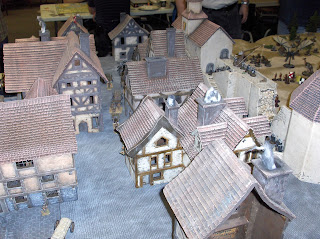 A couple of guys brought out an amazing modular table on which they were playing a Lord of the Rings game - "The Siege of Pelargir". 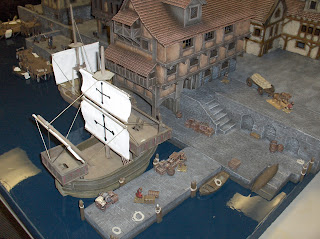 The table was 5x10 feet, half of it an amazing medieval-style town complete with harbour, and the other half countryside. 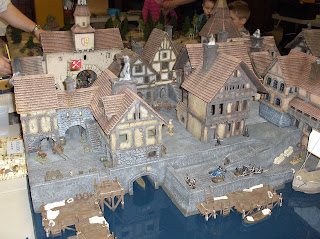 The buildings are all scratch-built from foamboard and other materials. The tile roofing is all hand-cut. 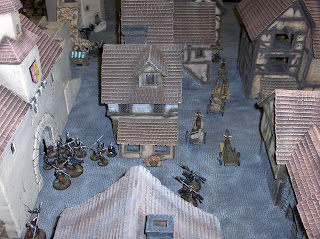 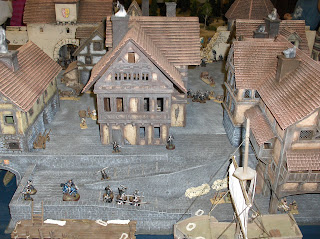 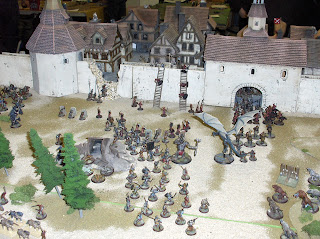 View from the countryside. The city wall has a removable section that has been swapped out for a "breached" section. 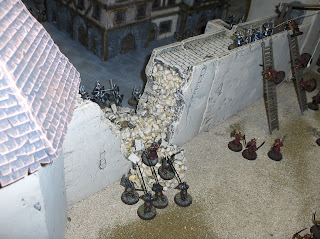 Close-up of the breach. 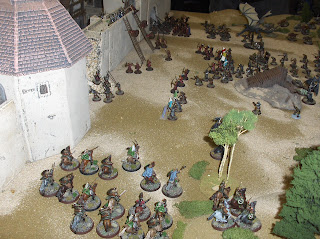 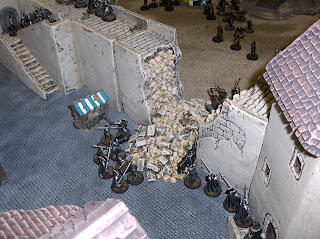 The amount of work and detail that went into this is mind-blowing, as is the sheer quality, especially in the town section. This kind of layout takes a huge effort to transport and set-up for a weekend show and my hat's off to these lads. It makes our convention efforts seem pretty lame by comparison, but at least we're out there putting on a game.
Posted by Dallas at 9:55 AM

Those Chemical Commies are at it again! Smite them! Cast them down! Looks like an excellent game and a great con!