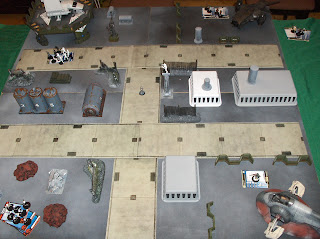 On Thursday Conscript Frederick came over. I had set up a small multi-faction Star Wars Miniature Battles game. The idea was to capture the droid standing in the middle of the table, but to combat what I call the McWatt factor (i.e. the tendency in multi-player games of one player to "camp" until the other players wipe each other out, then grab to objective at the end) I specified that one VP would be awarded for each turn that the faction had a model in base contact with the objective droid. You can slap a restraining bolt on him and move him around too, of course! 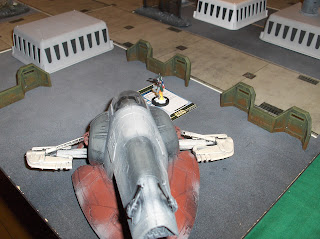 Being as there was just the two of us, we rolled randomly for choice of faction. Frederick got Boba Fett (50 pts), I got the Imperials (~65 pts - an Officer, three Navy Troopers, four Stormtroopers and a heavy Stormtrooper). 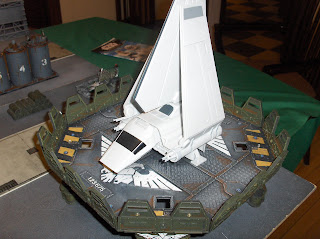 We started in the corner with the Shuttle. 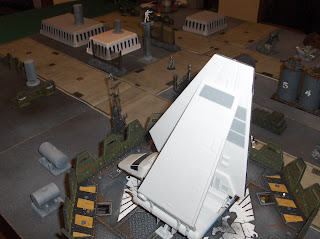 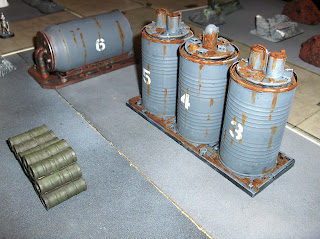 Sludge tanks from Armorcast are new too... 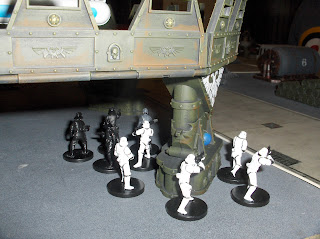 On to the game. My Imperials move out from under the pad... 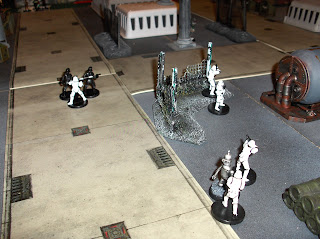 A few turns later, the Droid is safely in Imperial custody and withdrawing towards the Shuttle. This is the turn that Fett kills the last two Navy troopers - he's already done for the Officer and one Trooper. 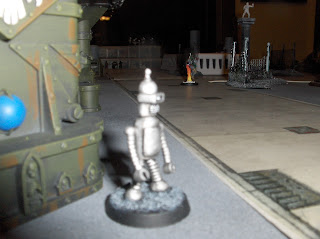 Even though the Imperials had custody of the Droid for five turns, he will leave with Fett... that's just the way it is when you have 11o hit points and a Defence of 20 :-)

I like this scenario and it will be fun to play it four-cornered... I had another bounty hunter group and a group of Rebels ready to play as well. I think the "Fett effect" (i.e. the fact that he is grossly overpowered for the points) will be significantly lessened with more factions on the table.

Looks like a lot of fun, great table to boot.

This rocks. Glad to see people using the Star Wars Minis and getting some good tactical games in. Clearly you are using variation on the rules, since you've dispensed with the grid. You doing movement with 1 square = 1 inch?