Another PSC Panzer IV for this post.  This paint job is intended to fit with the summer of 1942 on the Eastern Front.  This is a Mark IV F2/G - similar to the other two I painted earlier but with a paint job for an earlier period of the war. 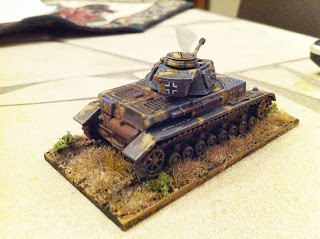 I put a decal on from Battlefront's Stalingrad decal set on the rear panel...I am always a little wary of Battlefront's statements of history, but apparently the little little yellow I think it is the 24th Panzer Division.  I'm not sure if that is a correct symbol, but overall this tank looks ready to pursue the doomed  operation Blau. (Or was it "Fall Blau"?) 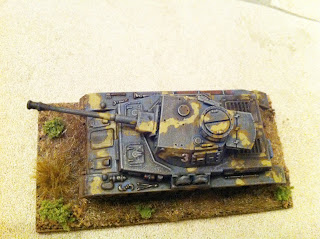 These tanks provided heavy fire support to the blue-collar Panzer IIIs that still carried out the bulk of the front line panzer fighting against increasing numbers of T-34s, KV-1s and other armoured horrors the Red Army threw at the Germans.  I will not need too many of these for a game - compared to Panzer IIIs...which PSC also has available in box sets... 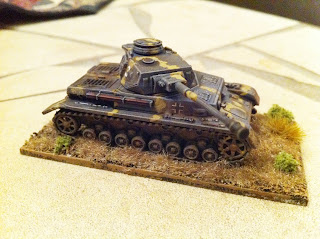 I have one Mark IV F2/G left from my box of PSC Mark IVs.  I am thinking I am going to try and give it a winter paint job, suited for the fighting in the winter of '42-'43 around Karkhov or the desperate attempts to relieve the pocket in Stalingrad.  I have no 15mm figures with winter paint, camo or terrain...but I have to start somewhere, and a PSC panzer would be good to practice on.
Posted by Greg B at 2:00 PM

love it, all my mid war 15mm tanks are painted like this, my favorite german camo pattern

my fovorite camo patern of the war, mine are all done this way too

Very nice work on that panzer Greg. I like the mottled paint and the weathering is excellent.

very nice work on this.

yes agree .I am always a little wary of Battlefront's statements of history, but apparently the little little yellow I think it is the 24th Panzer Division.

I have no 15mm figures with winter paint, camo or terrain...but I have to start somewhere I like the cut of your jib!

Nice work dude. Makes me want to crack open some PSC boxes and have at it as well!