Another submission to the painting challenge.  This is a little vignette from the Perry's outstanding 28mm Sudan collection, a captured Egyptian Krupp gun complete with captured Egyptian crew and a Madhist overseer/volunteer coordinator. 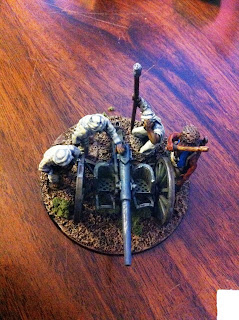 In colonial games it is usually the Imperialists that have all of the artillery.  But when the Madhists overwhelmed Sudan, they captured a lot of Egyptian artillery, and a lot of Egyptians.  The guns were not major factors in the battles of the Sudan campaign as the Madhist crews - "volunteers" or otherwise - were not very accurate with the weapons, and artillery was not really how the Sudanese rolled into battle.

This piece has sat in my pending pile for several years, so it is great to finally get this painted.  Having some artillery for the Madhists will make for a fun additional to the colonial battle.

I figure the completely bonkers air support chart from Bolt Action will do in terms of rules for using this gun - who knows where the shells will land? On the British? The Madhists? Both? Nowhere?
Posted by Greg B at 12:00 PM