A few days ago a poster on TMP asked me to post some pictures of my 1/200 Zentreadi stuff for Macross.  This TMP member, "The Black Android" has been doing some pretty cool Robotech/Macross stuff of his own.  Since I was called out, I had to answer - so here are some pictures of my Zentreadi mecha. 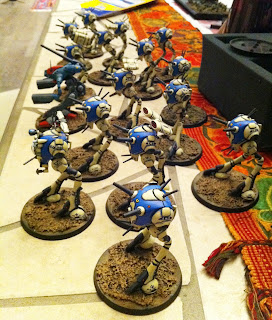 The models are almost all from kits sold under the "Nichimo" brand, but I have also seen them on EBay under other, strange, brand names.  I generally prefer the Nichimo versions, because you get two models in the same box.  They are actually meant to be screwed together (you get the tiny screws) so the legs and (where applicable) arms can move, and somehow mounted on your wall in a plastic bubble (I'm not making this up).

The only non-Nichimo models are two plastic "Gashapon" Tactical Pods that I sprayed back and re-painted.  They look almost identical to the others.

I used super-glue instead of screws, filled in the recesses with green stuff, dispensed with the plastic bubble, and mounted them all on 60-mm round bases from GW.

The models came with decals, but they looked a bit dodgy, so I painted all the markings on by hand.  Since Zentreadi tactical markings are mostly random scrawls of an alien language, it was a good solution.

These guys have seen action a few times on the Fawcett Avenue gaming table, and have also seen action for the past couple of years in demonstration games at PrairieCon in Brandon, Manitoba.  I'm a huge fan of Robotech and Macross, and it is always a real treat to haul these out for a game once in a while.

It's great to see other gamers out there on TMP working up their own Macross projects, complete with rules and even new sculpts of their own (!) given how hard it is to find the models these days.  Check out "Mech Dude's Blog" for a really detailed effort.

For my part, I still have a few boxes of these things in my basement, and I even have a couple of assembled and primed battle pods somewhere in the "pending" pile.  I may add more pods at some point, but have found in the games we have played that this force offers plenty to shoot at.

I love the premise of this stuff:

Oh, wait, or is that for Napoleonics..?

Hi Greg, thanks for the mention of my stuff. Your army and rules et are what inspired me to started down this path of madness as well. I'm honored that you've enjoyed my work.

I'm going to have to look at attending Prarie Con the next time it comes around as I'd love to get a chance to play this at a con.

man this could have easily sent me into a frenzy if those models were still available. Hopefully a rerelease will happen at that crazy price of 500 yen for 2. and I like the scale a lot. As long as i can get a Spartan and rifleman on the table, I'll be good.

BEautiful stuff. Brings back memories of when Macross originally aired in KC at 6:00am before school.