Building off of a test model I painted earlier this year, I have worked up a group of Panzer IIIs from Battlefront.  I hope to use these in various 1943-themed (especially Kursk) scenarios. In particular, these models will be part of an effort to adopt the very, very cool WW2 board game "Conflict Of Heroes" for 15mm miniatures.

The first three tanks are late-model Panzer IIILs - they had long-barreled 50mm guns and extra armour bolted on to the front of the body and the turret.  I quite like the look of these plucky tanks, maxed out with everything the Mark III chassis could handle in order to face the increasing numbers of T-34s, KVs and other Soviet tanks. 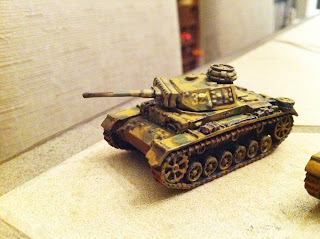 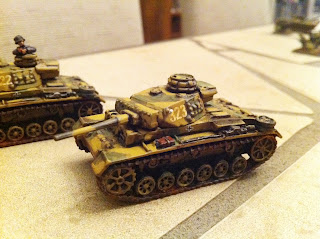 It's hard to see that much in the pictures (boy am I self-conscious now that Dallas has his own little photo studio), but the camouflage is actually a light green.  Once again, the tactical numbers were a bit of a challenge, but using Micro-Sol decal softener I can at least get them to sit snug on the turrets without any silvering.

Even with the heavier armour and bigger gun, the Germans were still not done squeezing the Mark III chassis - there was also a variant that mounted schurzen, the steel side skirts generally synonymous with the late-model Mark IV panzers.  I'm working on a couple of these for this force too - here are some pictures of one I finished last week. 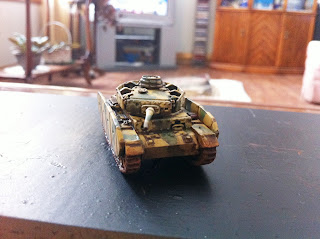 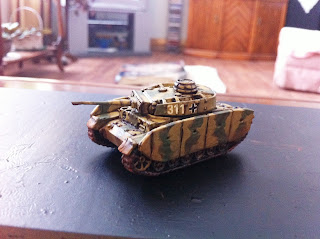 My grasp of the science around how things explode is very poor, and because of this I have never quite understood the purpose of the schurzen plates.  I think they are supposed to make an AT round of a certain type blow up outside the actual armour of the tank....or something.  At any rate, it's a defining look of the German panzers, and the thing certainly appears to lame civilian eyes like mine to be much more armoured than it otherwise would be. 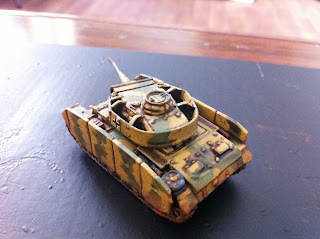 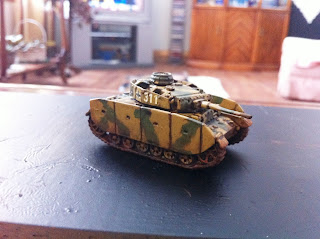 These tanks will be available for duty in Flames of War, but I'm hoping to try other games, like Spearhead, and an adaptation (as mentioned previously in this post) of the game Conflict Of Heroes.  While visiting in Regina, Curt C ran a quick scenario from this game (which, by the way, is just excellent even without any figures as the maps and counters are some of the nicest I have ever seen for a board game).

The scenario - set during the Kursk campaign - featured an immobilized Tiger 1E which had been left behind as the Germans advanced.  The Germans were trying to recover it by towing it off the table, and sent a small group of lighter panzers (two or three Mark IIIs and a Mark IV) to cover the retrieval.  The Russians, meanwhile, have sent a couple platoons of tanks (T-70s and T-34s) to spoil the party.  It was a great scenario, and I'm hoping to try in 15mm soon...

Lovely stuff, Greg. They really turned out great. Looking forward to trying them out with Spearhead and CoH.

Re: schurzen... I always thought they were designed to defeat hollow-charge AT weapons, but apparently that was an Allied intel goof... seems that the intended purpose was to better protect side armour against Russian AT rifle rounds and HE.