I'm just back from a wonderful vacation in God's Country (aka Lake Superior shore in northern Ontario) where I was able to watch curling, paint, and enjoy amazing home cooking.  I love Sault Ste. Marie!  During this time I have finished some more 15mm WW2 stuff as part of my vain pursuit of some kind of respectable position in Curt C's painting challenge, and here are a few posts with pictures.  Up first: a platoon of late-war Panzer Grenadiers from Battlefront.

I know Battlefront doesn't exactly blow the doors off when it comes to sculpting quality (and some of their vehicle casts can be a pain), but I really like the boxed set approach - it gives you everything you "need" - the troops, the vehicles, the bases and the decals, and this plugs very nicely into the wargamer mindset.  The quality is OK, and you get a nice little project out the box.
The biggest challenge I had with these figures was painting the camouflage on the infantry.  My previous experience painting late-war German infantry has been limited solely to 6mm scale - pretty forgiving in terms of precise details.  On 15mm models, you can see more stuff, so I tried to do some research about the German camo patterns.  I found way, way, way too much information - the "oak leaves" pattern or whatever, the SS had different stuff, blah blah - it was all super confusing.  To avoid "painters' block", I went with the "screw-it-I'll-just-take-my-best-shot" approach.  The results seem OK to me, and will no doubt be wrong to someone well versed in what the Panzer Grenadiers wore in the spring of 1944 blah blah blah....I'll save that for TMP. 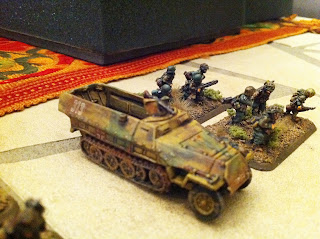 The half-tracks are the late-war model, with a distinctive straight, sharp angle on the back.  The box set provides for all sorts of extra stowage and several "riding" figures if you want them. Since this was new-ish territory for me, I kept it simple, with riders appearing only in the command track, and only one of the other tracks mounting an MG-34 (or is it 42? I am always confused) gunner.

You also get the bits to mount a larger gun (I think this was a 37mm gun?) on the command track.  I put an officer-looking fellow and an NCO into that vehicle as well to give the half-tracks a touch of life. All the vehicles received heavy doses of GW Devlan Mud and dry-brushing, followed by some pigment powders to dirty up the wheels and treads.
On the infantry bases I tried out these new "tufts" of grass that I have seen other gamers using.  My application was a bit dodgy, but not bad for a first run.  These things seem expensive, but I abosolutely loved them, and I expect I will be starting to look for tons of these things because I really like how they turn out.
All in I think this represents a platoon for the purposes of playing Flames Of War.  One challenge for me, however, is that I don't particularly care for the game Flames Of War. It'll do in a pinch, and because it is so popular, a lot of other gamers will be interested to play it, but I find FOW has many significant negative characteristics  - artillery on the table, too much "close combat", tankers bailing out all over the table, objectives synthesized into counters, 30 different scenarios that essentially create the same gaming experience, a steady stream of re-issued "army books", headache-inducing amounts of small, special rules that serve to haze up the otherwise straightforward game mechanics, and a table clogged with axle-to-axle vehicles (although with 15mm you have more space, so it doesn't look quite as silly as a 2000 point 40k game on a 4'x6' table). I haven't tried the "latest" edition of Flames Of War, so perhaps some of these things are reversed.

But one idea that popped into my head is to try a game of Spearhead using the 15mm figures.  Although the Spearhead rules envision 6mm models, I'm sure the 15mm ones can be accommodated with a little thought and common sense and without any re-basing.  And I have a theory that playing Spearhead in 15mm could engage the players a little more, for the reason that the infantry units will have a bit more "life" to them, and therefore be more fun to play, because they have a stronger feel and are more clearly represented in the larger scale.

Once I get enough stuff painted, I hope the guys will indulge in an experimental Spearhead game in 15mm sometime soon...

Go for it! When I played Spearhead (as an alternative to Command Decision), I used 15mm stuff and it seemed to work well. Like the painting, too.

15mm figs always worked for me when I played Spearhead (as an alternative to Command Decision.) Good painting, too.

Thanks John. I've heard about Command Decision, but never tried it. How would you rate it? Is it very different from Spearhead?

Command Decision is far more detailed and the mechanics are more complex. I found Spearhead to be simpler and a bit easier to play. (Of course, ditching two Tiger I's with a 17pounder ATG endeared the rules to me!)CD offers a more detailed OB and structure, but Spearhead MIGHT be more playable. (A matter of opinion) As an example, Spearhead is two booklets, while CD is two booklets and a 1/2 inch thick book. Both are OK with 15mm and there is no need to rebase.

The cammo pattern looks great. As you said, there are no doubt period fans out there you can nit-pick, but they look the part and more.

Alas, my customers expect me to be spot on with these things, but not every gamer has to grab an Opsrey book for pin-point accuracy.

Have you thought about using Blitzkrieg commander? Its meant more for 10mm but I think it would work and look pretty good in 15mm so long as you had a biggish table (8"x6").

@Samulus - we have not tried BKC, as our experience with it's equivalent game, Cold War Commander, has been mixed at best.

I am impressed with the production values and effort that have gone into the BKC/CWC/FWC series - and we've had some fun games of Future War Commander - but I don't find the Warmaster engine to be very good for shooting conflict.

But the only way to know for sure is to try, so we may give it a go...

Have you considered using Blitzkrieg Commander? it plays fast and if you used a bigger table (8' x6' ) there'd be no issues with 15mm scale (providing you have enough minis!)

I like your idea of trying 15mm Spearhead. If you like you can just amp-up the table size to make it look better. Otherwise I've always thought of 15mm being a great size for 1:1 skirmish-level gaming. I'd still like to try porting 'Conflict of Heroes' to miniatures as I really like its game mechanics. Perhaps we can try it next time you're out for a gaming weekend.

These look sweet. I'm in agreement that this box set is a great one with everything you need and it's probably the most fun I've had assembling and painting a box set.

Greg,
I feel the same way you do about FoW and have been considering using my 15mm FoW figures with the Spearhead rules. Spearhead is one of my favourite rule sets and I have played it in 6mm for many years. You would probably need to increase the ranges by 1.5. If you are doing late war you may want to make some modification to some of the rules that favour the Germans that are more appropriate for early and mid war. Please post a message to let us know how it works out.
As for Blitzkrieg Commander I tried it and while I liked the command and control I found the shooting mechanics did not work for W.W.II It seemed you had to concentrate the fire of many tanks on one tank to get a kill, which created an attrition type feel not appropriate for W.W.II
Another good set of rules is Kampfgruppe Commander but like Command Decision it has more detail (including excellent command and control rules) but does not play as fast as Spearhead.