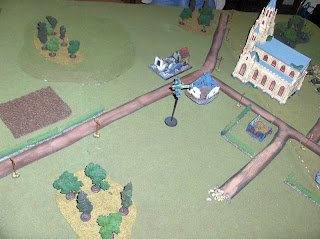 Owing to Conscript Greg's recent 15mm mania, we thought we'd roll out a WWII game this week using some of the new toys. Greg came up with a scenario based in late June, 1944, featuring a German armouyred counterattack by the 1st SS Panzer Division, near Caen. Conscript Brian and I took control of the German forces while Conscript Mike F. played the British defenders. 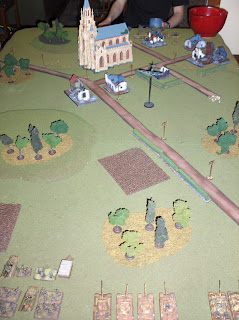 We set up the terrain to represent a village near the Odon bridgehead defended by the British 11th Armoured Division. I got to deploy a very impressive cathedral model that I'd bought a couple years ago as a "Christmas Village" piece - it had a lot less snowy patches to repaint (you can see a couple on the roof) and none of the usual twee elements (Christmas wreaths, poinsettia bouquets, garlands, etc.) that really destroy most Christmas village pieces for gaming use. For rules, we decided to use the tried-and-true "Spearhead" set that Greg as gamemaster is very familiar with. We'll try Flames of War v.3 soon i think but for a last minute idea Spearhead was great. Since all wargames are just representational to some degree we considered each vehicle model to represent a single real-life counterpart and each infantry stand to be a half-section. So we essentially had an understrength German company (two platoons) plus two Panther platoons and a StuG platoon, attacking a British infantry company and attached Sherman tank squadron (three troops of three tanks each), plus two 17-lber AT guns and a Typhoon as close air support. German objective: to eject the British from the village, in 10 turns. 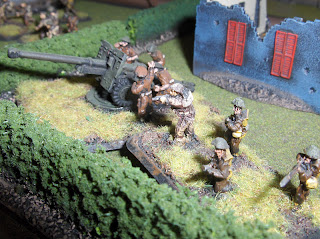 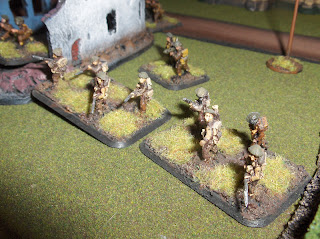 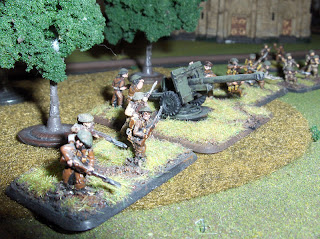 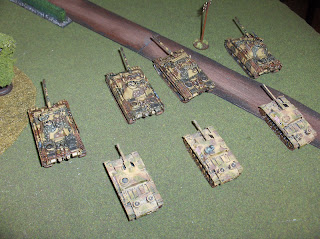 The Germans came streaming across the table towards the village. 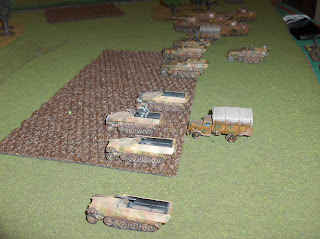 German panzergrenadiers on the left flank of the assault. 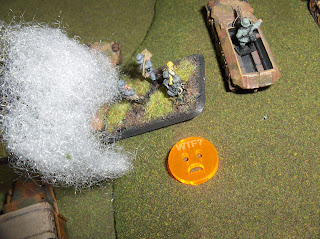 British AT gun lights up a sdkfz 251, eliciting the "WTF?" marker for the mounted squad... 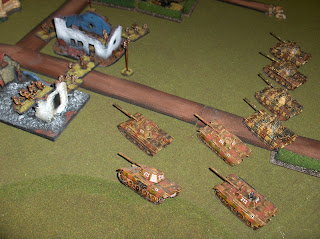 The Panthers rolled directly towards the village. Note the straight line that could be drawn through all the Panthers at top right. This become relevant when the Typhoon arrives... 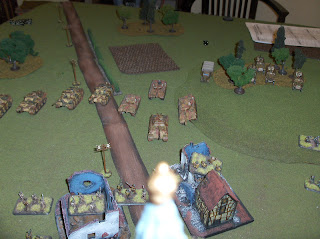 View of the assault from the steeple of the cathedral. 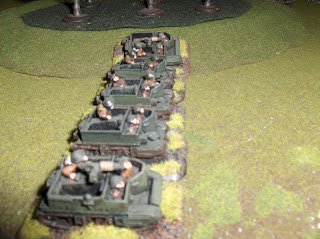 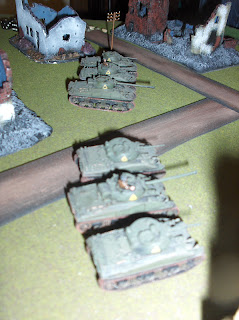 Shermans in a gun line. They were quite successful against the StuGs, less so against Panthers. 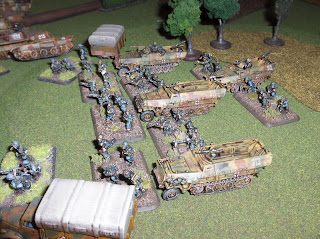 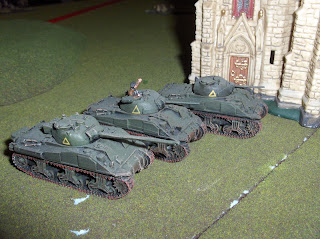 Sherman troop next to the cathedral destroyed one Panther platoon with some nice shooting. 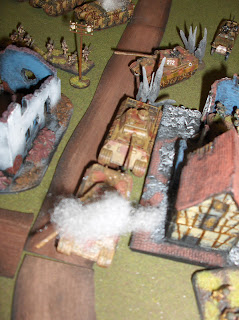 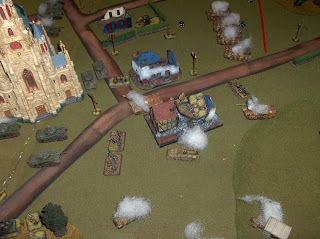 The German assault was repulsed, bloodily. By turn 8 it was apparent that the assault would fail - the Panther platoons were destroyed or had fled, and there wasn't a great deal of infantry left, either. While the Germans had some local success on the left flank, they were doomed once reinforcements arrived. And the Typhoon (when it showed up) was devastating - a cool historical result.

I quite enjoyed using Spearhead for a smaller game. While the engagement ranges were quite short (mainly 6"-9") for some reason it didn't bother me, as the game rattled along quite quickly. A lot of fun - thanks to Greg for running the game and bringing his awesome new toys!
Posted by Dallas at 2:56 PM

A great AAR and some cool miniatures.

Great stuff - have you considered using Crossfire for your skirmish games? It's Conliffe's company level version of Spearhead, essentially.

Thanks for the comments! A-Historian - yes, we used to play Crossfire quite a lot, but found that it broke down quite badly when playing with more than a couple of tanks.

Lord of the Western Keep said...

Excellent AAR and pictures, like the Church. I am thinking of trying Spearhead for 15mm, what changes to the rules did you make so that it works for 1:1 and 15mm?