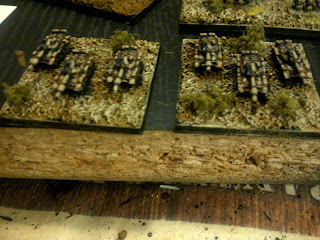 Well, after the rush to complete some Napoleonics through the new year, it's time for a new, and hopefully much quicker, project. Rummaging through the pile-o-stuff in the basement, I found my stuff from Oddzial Osmy - 3mm scale modern armour and infantry. I had been reading a bit about the 1973 Yom Kippur War lately, and it clicked that a scenario in 3mm from the Sinai in 1973 would be the perfect short project. I got started over the long weekend (and after all, with the rain and the "spring" like freezing temps, what else was there to do?). Here are some pictures of "test" figures.

The Modern Spearhead rules include a scenario pitting an elite Egyptian armoured brigade against Israeli armoured reserves in the Sinai near the canal late in the 1973 war. I thought this would be a good "target" scenario to start with. Here are some T-62s - the rounded base equals a command stand. 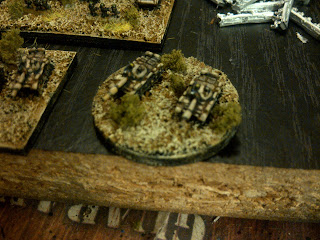 We have gamed previously using these super-small figures. The detail is great - incredible, really, considering the scale, and the figures paint up fast. The depth of the range is really something too - they have almost every relevant tank, armoured vehicle, aircraft and helicopter. Dealing with the distributor Pico Armor is a breeze, with excellent customer service. It's also great price-wise - 15 tanks are like $4 US.

I still love the GHQ stuff for Spearhead, but this scale has several advantages. One thing that is neat about the small figures is that you really do have a tank platoon on the base. Another is that you can represent a much bigger battlefield on the same scale of table - you can play a game on a smaller table, or a bigger game on a normal table. 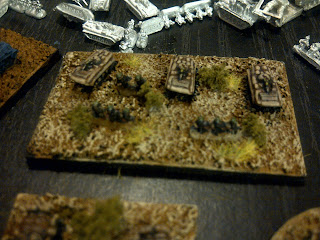 The scenario features a total of six battalion-sized units on the table - four Egyptian and two Isreali. All and all about 54 bases on the table. I'll do a little project tracker on the blog to help keep me moving, and post pictures as I go. Right now I am still doing "test" figures. I have pretty much nailed down the Egyptian colours. I am still struggling, however, with trying to get the right colour mix for the "field gray" the Israelis used in 1973. Watch for more progress in the blog.
Posted by Greg B at 9:35 AM

That 3mm stuff is amazing - great job! I think I may try their ACW to see if I can get a brigade each done in 1:1 scale.