I had my camera out for Astro, so I decided to take some pics of my current Eldar Swordwind tournament force.

Here is the entire force on its display/movement tray: 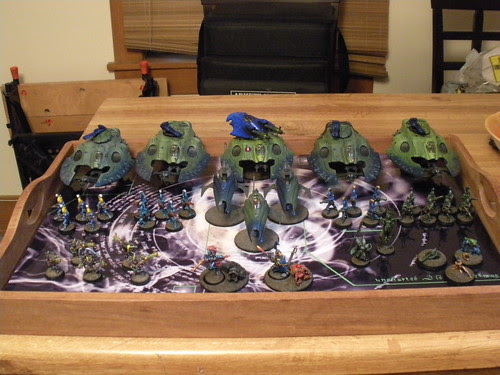 The two HQs below are converted from, respectively, a Banshee Exarch and a Warlock. They are removable from their display bases for gaming. Yes, I actually bought an entire box of Khorne Berzerkers just to use as victims and battlefield detritus. 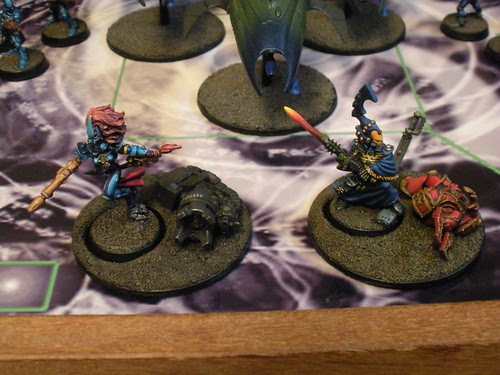 Below are two squads of Dire Avengers and their skimmer APCs. The yellow-helmeted Dire Avengers were painted by Conscript KevinH several years ago. They ride in the oldest of my Wave Serpents - note the diamonds painted on the hull instead of triangles. Kevin and I painstakingly cut out diamond shaped airbrush masks from tape. I later found a triangle-hole-punch, using Post-It Notes for the masks (so as to not lift paint).

All my Wave Serpent tanks are Forgeworld resin conversion kits. I like their look better than the current plastic models. The turrets are magnetized to easily swap for other weapon options. The models use magnets for mounting to their flying bases. I still have 3 unbuilt FW Wave Serpents in my stack of unbuilt kits. 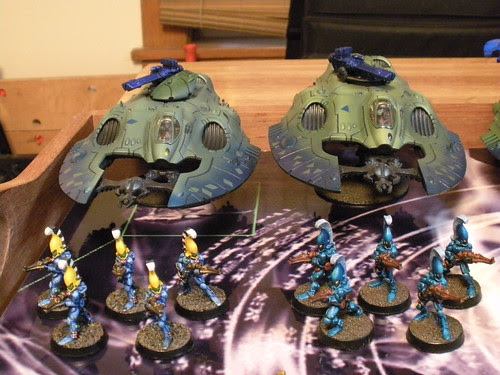 Below are a third Dire Avengers squad, and the Fire Dragons. For the Dires, a third scoring unit instead of my usual two gives a few more options for objective-based scenarios.

The big Dragon squad is a "fire and forget" weapon that I try and hold onto for as long as possible - once they dismount and blow up something they're pretty much toast. 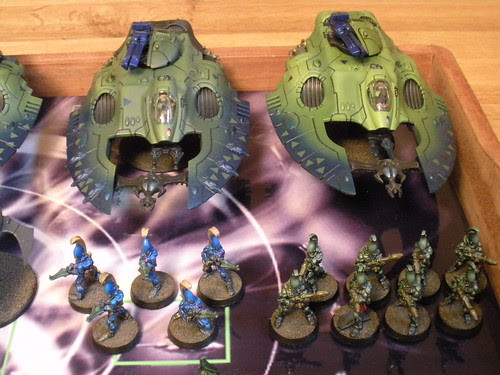 Deep striking Warp Spiders are fun to play. Conscript BrianH painted them for me for my birthday one year. The unit won "Best Sci-fi Unit" for him at GenCon awhile ago. They are the best painted Spiders I have ever seen. 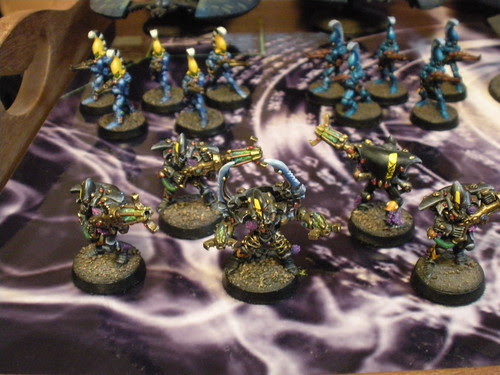 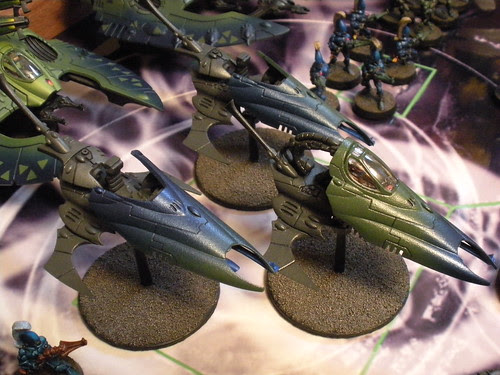 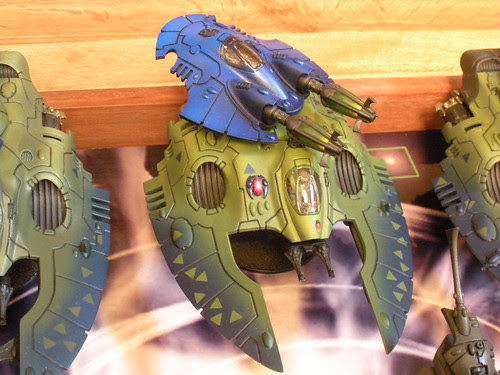 Psychic power tokens - WFB models used to mark units with Fortune (re-roll saves) or Doom (re-roll wounds). I envision Eldar powers as based on their Spirit Stones and the essences that lie within. 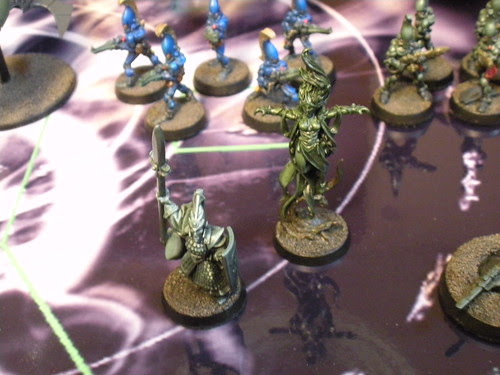 Objective markers - various models that an Eldar force might think worth fighting over. The Sister of Battle is from the Dark Eldar model of Asdrubael Vect's barge. 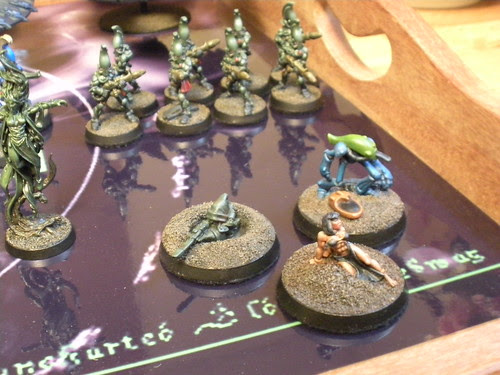 Including other painted models such an an aircraft and a super-heavy tank, I can probably field 4,000 points of Eldar for an Apocalypse game.

The actual list I used for Astro is as follows:

The list was designed for the upcoming Las Vegas GT. However, I pressed it into service for Astronomi-con Winnipeg 2011. As it turned out, even with sold-out attendance I was the only Eldar player at the tournament. Perhaps this is due to the relative age of the Eldar codex and all the shiny new toys available now, like the recent Grey Knights release.

Hi, Nice Eldar, Nice Blog, I have just followed and will add you to my Blog Roll.

Very nice, Dave. Some oldies but goodies in there.

When is the Las Vegas GT? How many players will be in attendance?

Curt, I really like the old Jes Goodwin models. I have enough of those old unpainted Aspect Warriors to do 30+ more Avengers, and 20 more each of Dragons and Banshees.

The Las Vegas GT runs June 17-19, with the tournament proper on the 18-19. I don't know how many players are attending, but there are around 70 tournaments feeding it, with the top 2 or 3 players qualifying. Purely a guess, but the 40K slot may be 150+ players?

Good on you for making the cut and getting in on that, Dave. With 150+ players that will be quite the nexus of hyper-anxious geeks.

Just discovered your blog. Keep the updates going because i am really enjoying it. I really like the fact it's Winnipeg based.