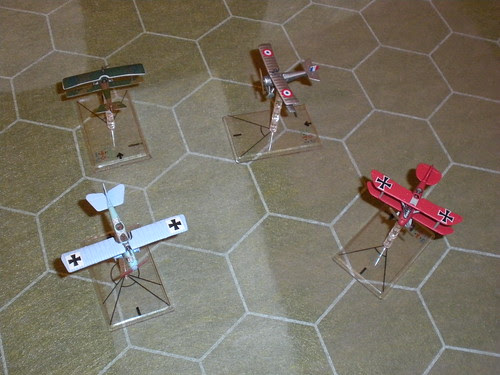 Tonight's game will be the first of the long-gestating Wings of War campaign. The game will be set in 1916, pitting men and machines of the French Army Air Service (Aéronautique Militaire) against those of the Imperial German Flying Corps (Die Fliegertruppen des deutschen Kaiserreiches).

Each side reveals the newest weapon in their arsenal – the airplane – and attempts to seize the initiative. The side that wins goes on the offensive for the next game of the campaign.

We shall be using the Knights of the Air campaign system for Wings of War. The system uses the rules from Famous Aces and Watch Your Back (including the Special Damages, Aim, Tailing, and Blind Spots For Rear Guns optional rules), plus we may use our home brew Limited Ammunition rules.
Posted by DaveV at 4:31 PM