Last Thursday, I prepared a scenario for the sail ships inspired by the battle of San Domingo. It was the occasion to test a few rules tweaks, most of them taken from Wargames Illustrated n260, but also some of my own, including redrawing the ship display. 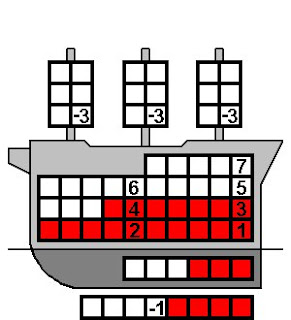 The display is inspired by Kiss me Hardy!. Numbers in the hull indicate the number of die for gunnery. If damage reaches red zones, the ship must test in the end phase for striking colors. The big change is the suppression of the saving throw, making the combat resolution a little quicker. But let's go back to the scenario. 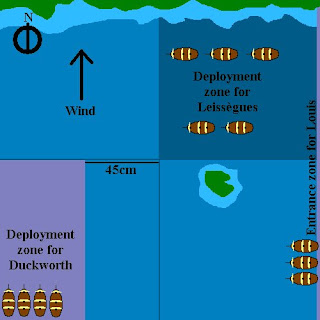 Leissègues' fleet had the mission to disrupt British shipping lanes in the Carribeans. During a stop in San Domingo, Leissègues decided to leave in haste the safety of the port when hearing the news that a British fleet was approaching. The British split their fleet in two squadrons in order to trap the French fleet. Stacy, briefly helped by Rob, was in charge of the French vessels, while Curt and Allan would share command of the British.

Here is the French fleet, cruising under the nice Caribbean sun, minding its own business. The fleet was lead by the Impérial, a giant 120 gun first-rate under the cmmand of Amiral Stéssy. The green tape represents shallow waters. 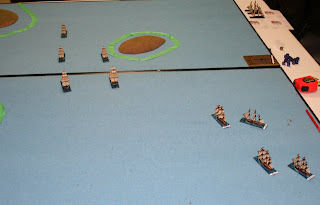 Trouble on the horizon! Admiral Allan forms his ships into a line of battle to engage the French. 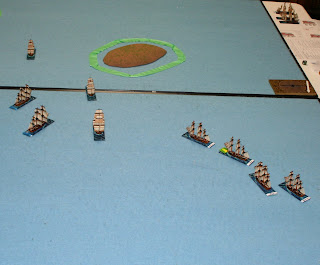 Amiral Stéssy wanted to demonstrate that French sailors are not just decorative. He ordered a series of tacking maneuvers to confuse the British. 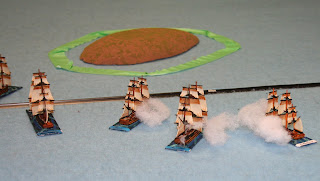 Boum! Boum! Guns are talking. Admiral Allan had his guns readied with double shots and it proved devastating on the Impérial.

More ships are being engaged in the exchange of fire. More shots on the French first-rate.

Hey, what is that black smoke? The Northumberland is on fire! And what is that ship on the horizon? It's Admiral Curt, finally joining the battle after some delays that will later have to be explained back in London. 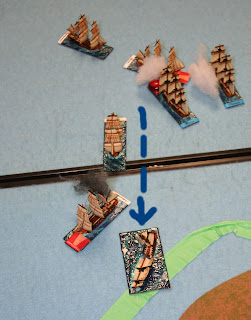 Badly damaged, the Impérial found the situation hopeless. The French had the option in this scenario to try run aground instead of being captured. So Amiral Stéssy bravely headed for the island and got stuck in shallow waters where his flagship got wrecked. 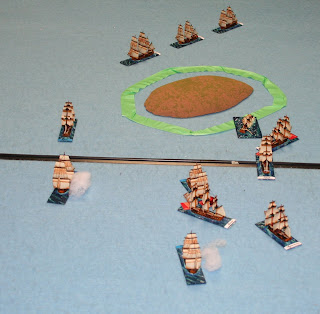 Admiral Curt is closing in, eager to make sure his ships will be included in any future historical paintings of the battle. 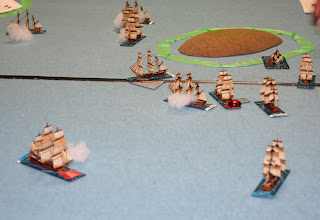 And here is the final situation. A nice tableau of confusion, violence and destruction! Two French ships were grounded, one was captured and two were able to escape to an uncertain future.

I found the rules changes quite satisfying, although a few more adjustments could be made:
- Firing at masts seems futile. No British ships were dismasted as was usually the case after meeting the French. I will have to revisit the rules.
- The article in Wargames Illustrated proposed that the line of fire is blocked if there is a friendly ship anywhere in the firing arc, to encourage captains to adopt the line formation. The approval rate of the rule was quite low. I will have to rethink that one.

Curt wrote his view on the game in his blog.
Posted by Sylvain at 7:09 AM

Thanks for putting on a great game, Sylvain! Except for a few quibbles the new mods work quite well.

Sylvain - those ships are gorgeous.