Just a short update on my continued efforts to finish that initial roster of 25mm Napoleonics I started last July. Curt and I are doing really big units in the "grand manner" style. To help keep us motivated, Curt has launched his own spring thaw challenge. I had finished off my first three infantry units, some command, some skirmishers and (eww) artillery. Now I'm stuck into the hard part (for me) - cavalry!

Our cavalry units are 24-figures strong. I am close to half-way on my first cavalry project, a unit of Austrian Dragoons. The figures are from Foundry. Here are a couple of pictures of the progress so far. 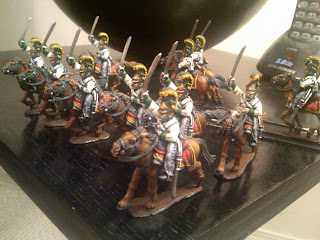 I'm starting to get into a bit of a groove with the cavalry, but I can't quite bang these out like I can with the infantrymen. Practice helps, however, and each night I complete another one or two troopers is a good one! The picture below is a testament to my lack of project focus - you can see a bunch of 40k stuff in various stages of completion in the background. 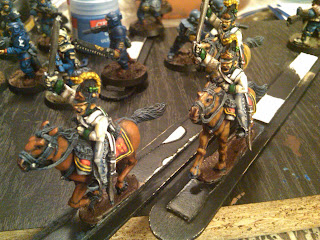 Helpfully for me the Austrian Dragoon uniform has a lot of similarities to the uniforms of the Austrian regular infantry - white coats, coloured facings, yellow and black puff (I'm sure it's not called a "puff", but whatever*) on a black helmet, etc. I can't wait to get these guys all finished and based, and at the current rate, that will likely be end of March. Every nervous Austrian commander needs cavalry to cover their flanks of their column (or just ride with them to check out a potential new summer palace), so it will be good to get some cav together for the scions of the sausage.

*PS - fellow Conscript Curt has informed the "puff" is actually called a "comb" - I'll remember that for the future!
Posted by Greg B at 8:40 AM

Greg, you're making great progress on those lads - they look the business. Just so you know, the decorative 'puff' bit on their helmet is called a 'comb'. Austrian dragoons are sensitive about these sort of things...