Ride above it all 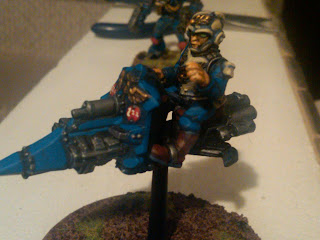 The Imperial jet-bike is a Rogue Trader favourite! I was pretty chuffed to acquire a couple of these things. The only downside is the rank of the officer - the Lieutenant is the lowest rung on the commissioned officer ladder of the Rogue Trader-era Imperial Guard. A pimped-out ride like this is much better suited to a Captain or, even better, the Imperial Commander - jetting around while the foot-sloggers march off to get gunned-down in the latest Imperial Guard offensive. 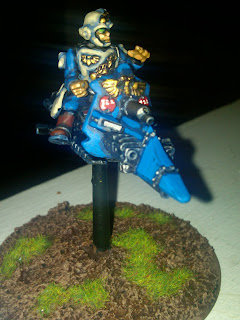 In terms of the strict technicalities, the Lieutenant needs to "always" have a command section with him. Of course, you could, in Rogue Trader, mount the whole lot on jet bikes (a medic, sergeant, standard carrier and a pair of guys with lascannons), but those figs are just not going to be around to acquire. So screw that - this Lieutentant will simply jet hover above his measly command section, if he uses one at all.

I do, however, have a Commissar with a jet-bike in the pending pile...so while this Lieutenant will be free of his command section, the local voice of the Emperor will be able to keep up with him no problem...
Posted by Greg B at 8:51 AM

That is a great retro model. To get around the issue of needing to have a command squad, you could model him to be interacting with a "horse holder" soldier on the ground. That is a pretty classic commanding officer look, so it should translate well.

Nice model Greg! I think your Ell-Tee is one of those rich guys from Cadia or Necromunda that bought his commission and managed to "acquire" a jetbike from motorpool in exchange for a few cases of vintage bubbly or the like...

The LT looks good on his jetbike. I bought up several of the jetbikes before the GW bits service stopped and used them to make a Praetorian IG Roughrider squad.