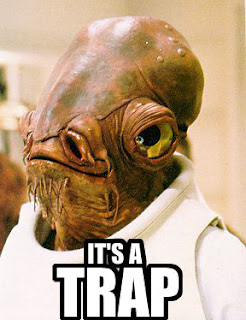 Last Thursday I put on a game using a variant of WotC's "Star Wars Starship Battles" rules and Imperial and Rebel fleets.  The scenario was an excellent Battlefleet Gothic scenario called "Escalating Engagement".  Basically each side divides its fleet into five divisions, and the game begins with one random division from each fleet on the table.  Each turn there is the potential for another division to arrive at a random table edge.  It makes for a pretty interesting and tense game. 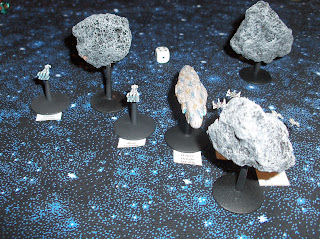 Each side divided its fleet into five more-or-less equivalent divisions.  The Rebels (me and Wes) had a superiority in numbers of ships with divisions composed of one capital ship and a cruiser or two corvettes.  The Imperial fleet (Brian and Indo) had a division with two Victory-class Star Destroyers and an Interdictor, one with an Imperial-class SD and a carrier, and three composed of a single Imperial SD. 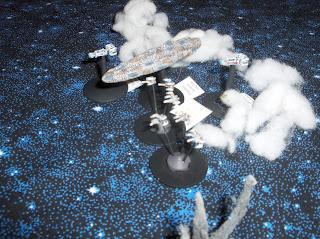 The capital ships were mostly all carrying fighters too, of course!  (these would prove their worth later) 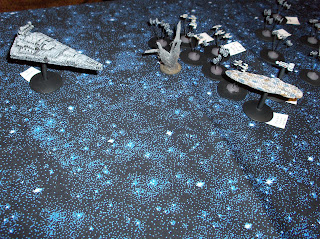 The scenario ran very smoothly.  All of the Rebel divisions but one warped in right on time and in good positions, beating up on the single Imperial division on the table - the two Victorys and the Interdictor.  But as soon as that division was comprehensively atomized, the remaining Star Destroyers all arrived, surrounding the Rebel fleet... "it's a trap!!" 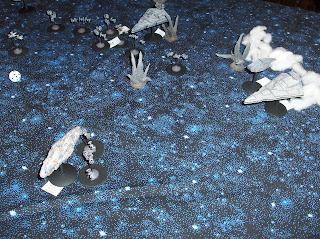 The X-wings were initially quite effective against the SDs - their proton torpedoes are awesome!  But once the TIE fighter swarms became fully engaged it was bye-bye Gold squadron... and Red Squadron... and Green Squadron... 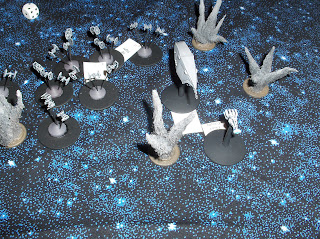 In the end, the Imperial fleet had been all but eliminated with just the carrier remaining... however the Rebels had nothing left nearby to hurt the Imperials.  There was an untouched Mon Cal cruiser and a Nebulon B that had arrived late to the party but they couldn't reach the fight in time to make a difference. 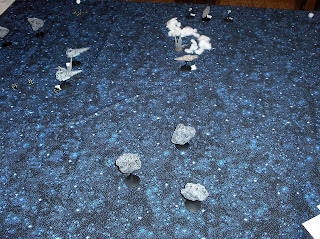 The game ran very slickly, I like the WotC rules with the additions we use for ranged weaponry.  Due to the size of the fleets and the number of players, we didn't use our usual additions for "shields".  The result was a faster playing game where stuff blew up real good and real fast.
I also love the aesthetic of the game.  The "Titanium" Imperial SDs mix well with the Micro Machines Victory-class and Interdictor conversions, and the MM Mon Cal ships.  The Nebulon Bs and Corvettes as well as the Imperial Carrier are from the most excellent Odyssey Slipways firm, available through Starship Modeller.  The fighters are Stringvest's snub fighters made by Drew of Studio Bergstrom and although they are of course grossly overscale, I think they look good on squadron bases mixed with the fleet scale models.
Posted by Dallas at 11:57 AM

Those fighters from stringvest are amazing (if large). Mine are sadly still in the same state they were 5 years ago... has it really been that long?

I also like the idea of using the MicroMachines as the smaller imperial wedge ships, and the titanium ships as the full on Star Destroyers. Do you have a comparison shot?

We've posted a couple other batreps with pictures of the ships:

The best comparison pic is this one:

(in the last link, the Interdictor and Victory SDs are based on Micro Machines, the Imperial SD is a Titanium model)

Looks like it was a lot of fun! The ships look incredible.

Thanks for the comparison shot.

Incredibly late for this, but in the event this post is seen...I'm interested in seeing the rules variant of Starship Battles you used? Are the fighters treated as squadrons rather than a single fighter like in the original game?

Hi Brian! Thanks for the comment. The fighter "bases" are treated like a single ship would be in the SWSSB rules. I just use a base with multiple tiny ships for aesthetic purposes.

Thanks for the reply! hmm...that gives me something to think about...do you mind if I post here again to this topic? I don't want to flood you with old topics...etc....btw, did you just convert the movement values to inches?

Yes, that's right. One square = 1 inch. I made up a little foam template to use in computing turns and firing arcs as well. You might be able to see it in the pictures in one of the batreps.