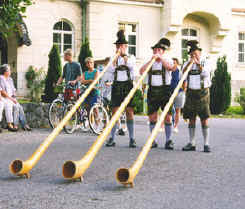 Over the weekend I finished off some more stuff to go with the ongoing Napoleonic project - some Austrian Jaegers, based individually as a skirmish unit. The models are from Foundry, and they are based on 25mm washers.

I love the Austrian Jaegers - with their high, folded mountain caps, stubby rifles, lacing for the powderhorns, french horns for the musicians, big-time mustaches etc. it's a bit like a Ricola commercial with guns. 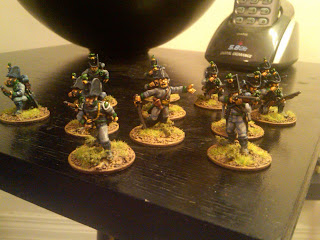 The Jaegers, armed with rifles, fought as either skrimishers or formed units for the Austrians. For the scenario that has driven my original list of units for the Black Powder challenge, the roster calls for one skirmish unit, so I did the Jaegers that way to fit the bill. 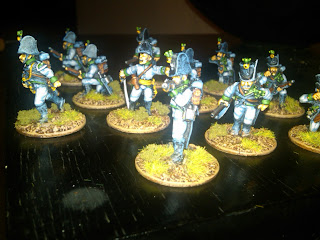 I was also limited by my collection - you might notice how quite a few of the models in this unit are in a particular loading pose, biting off a charge. Well, that is courtesy of Foundry. I had two packs of Jaegers - one of command, and one of "loading/firing". These packs were from a long time ago, when Foundry had 12 figures in the pack (for less money too). Well, all 12 of the "loading/firing" figures turned out to be loading. Thanks Foundry.

The command pack had some alternative poses (including one more guy loading - ARGH!), but it gives some variety (at least one guy firing, two guys running, the officer, and the musician). Overall, I think there is just enough variety to break up the monotony of the dudes chewing on the rounds.

I do want to have a formed unit in the collection, as Jaeger battalions were often present in the advance-guard-type columns that I think will make for some great 25mm-scale Napoleonic scenarios. A formed unit would call for about 32 models, and with Foundry looking for $22.50 US per 8 figures (plus shipping), I will opt instead for some Alban miniatures. I have never painted Alban before, but they look pretty sharp, so watch the blog for more on these in the future.

Meanwhile, I have finally started Napoleonic cavalry. Up first is a Regiment of Austrian Dragoons - a beefy one with 24 castings. I've never painted Napoleonic cavalary in 25mm scale before, so it will be slow going until I get a bit more confidence with the horses, sadles, bridles etc. But the Austrian Dragoon uniform is very close to that of the infantry (helmet, yellow and black pom-pom or whatever on the top, white coat, coloured facings etc) so that should help me get some momentum.

I also want to let you know that your link to Alban Miniatures leads to Manitoba Hydro.

Thanks Sylvain! Not sure how my fiddly brain screwed that link up...

Great work Greg! Looking forward to seeing some of those upcoming dragoons.

This puts you at 23 points for the Painting Challenge.

Dear Greg, i have only recently discovered thid blog and have fond it to be fantatastic. the passion you guys have for your hobbies really shines through.

Looking through various posts i noticed your blue colour scheme for your Imperial Guard vehicles and have fallen in love with it. I was wondering if there was a tutorial or recipe post for it. I tried looking through old posts but could not find one. The same goes for Dallas' weathering technique, the final results of which looks damned impressive.

Any help you could provide would be very appreciated. This is probably something best asked in an email but i couldn't see a way to do that.

Ben - thanks for your note. Glad you like the Blog.

The blue is actually a lot of dry-brushing, but the "recipe" is not too hard. I start with the model completely primed black. - It is then dry-brushed with GW shadow grey. - For the blue areas, I dry-brush GW regal blue. - Then I dry-brush GW enchanted blue. - I then do a very light-touch dry-brush of GW Ice blue. At that point I weather the vehicles quite a bit, but one thing that will impact the blue on all parts of the tank is a light final dry-brush of GW desert yellow. You don't have to do that if you want the vehicle looking like it is set for a parade or anything...

For infantry, I just paint GW Regal Blue on over black primer, then paint GW enchanted blue as a highlight.

Thanks a lot Greg, that helps a lot. So the weathering i see is primarily due to the effects of the desert yellow drybrush? (with some browns and such aswell i assume in places of deeper rust and dirt). The yellow really brings out and defines the blue.

That blue will look fantastic with my new vostroyan project- who will habe deep blue uniforms as opposed to gw's red.


Oh and apologies for some of the cack spelling in that first post.

Ben - for weathering, the desert yellow would account for a lot. Dallas is much better at the weathering side than I am, so he may comment too - but I try to dry-brush all sorts of GW browns (Scorched Brown, then Vermin Brown) on the tracks and the lower parts of the vehicles.

To make the rust/chipped marks, I paint a spot of GW Dark Flesh, then a smaller spot of GW Chain Mail or something like that. Again, I ripped this from Dallas - he does it much better.

On gun barrells/exhausts, I drybrush black to try and mark the soot from smoke/cannon fire.

We have also started experimenting with pigment powders. I have only done this sparingly so far, but you can get a really cool effect. I haven't used these on the blue tanks yet, but they will be going into my next vehicle projects.

The GW books (and other hobby books) are a great source for ideas and tips on weathering - I recommend checking them out for sure.

Hi Ben! Thanks for the comments.

I use some fairly simple techniques for weathering, mainly because I'm pretty impatient when it comes to getting stuff done and on the table ;-)

After painting the vehicle and applying decals, I start with a heavy drybrush of GW Scorched Brown along the bottom of the hul, working upwards at the front and rear to show the dirt being flung up as the vehicle moves. This is followed by another, lighter drybrush of Bestial Brown hitting the same spots. Tracks may be touched up with rusty brown (GW Dark Flesh) and hit lightly with a random drybrush of Boltgun Metal.

Exhausts are drybrushed Boltgun Metal, then "stippled" with Dark Flesh for a rusty effect. Rust can be applied this way on any part of the vehicle, according to taste. For dark, old rust, I've been using a weathering powder diluted with acrylic thinner to make a paste that's applied directly. I also use a chipping technique alluded to by Greg; paint small chips of Boltgun Metal, then fill in the inside of the chip with Dark Flesh, leaving some Boltgun Metal showing around the outside. You can see some good pics of the chipping method here:

Anyway, I hope that's of interest and I hope you enjoy the blog!