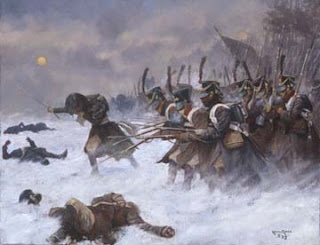 Where's my parking space! I'm glad you guys brought scrapers. F&%#ing Regina winters...
For Greg and myself Napoleonic wargaming is the absolute bees knees of the hobby and unless you have been living under a rock this past year you will have noticed that there have been a plethora of rules and minis released for the period. A veritable orgy of plastic figures are now available from the Perry twins and Victrix, along with more rulebooks than you can wave a marshal's baton at (Shako II, Black Powder, Lasalle, Rank & File, etc.). Yes, Virginia, its a wonderful time to be a Napoleonic geek. So, while Lasalle looks to be a great set of rules (and I will probably be a complete whore and do it in 6mm) Greg and I are both smitten with the 'Grande Manner' style of wargaming proposed in Warlord's Black Powder. Its completely unapologetic about its loony mega-sized units (30-60 28mm figures per battalion/regiment!) and has relatively straightforward rules. So as Lord Flashheart would say, "LETS DOOO-OOO IT! WOOF-WOOF!" We thought we'd pick a battle and use it as a target to build/paint towards. Lasalle has a nice little affair at Venzone in northern Italy depicting the early moves of the 1809 campaign. Greg is going to get the Austrians up and running and I will come up with the French. Six or so battalions each plus a few regiments of cavalry and some guns to bang away with - pure bliss. We've set a tentative date of April 'something' to do this by (come to think of it, as the battle occurred on the 11th of April maybe this is as good a date as any to aim for). The gauntlet has been thrown so now its time to get busy! 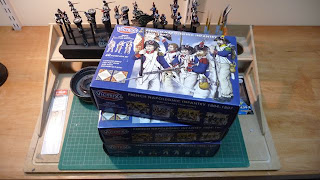 Last autumn I had picked up three boxes of Victrix French when they were promoting the Black Powder rules (it was a wee deal that was too good to pass up, what with the free shipping) and so I eagerly cracked them open the other day to start the race. Holy crap! I was completely gobsmacked when I discovered that there are around a zillion separate pieces to these guys! Each figure is composed of around 6-8 separate parts, with options galore - its completely mental. Anyway, I girded my loins, got out my sprue clippers, sniffed some plastic cement and started in. Well, to be sure they are a bit of a pain in the ass to assemble, but the variations in poses help to make up for it. I found that it will not be too difficult to create units where the soldiers look like they are interacting with each other which is pretty darn cool. This project will be a much harder slog than I first thought but the results could be well worth it. 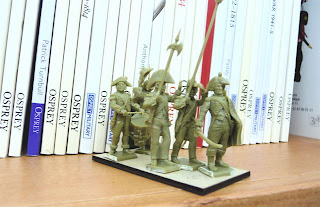 Here is a pic of some preliminary layout options I'm working on for one of the command stands... I really like that the Victrix figures are quite slim and that you can easily trim the bases around their feet. This will allow me to pack them in shoulder-to-shoulder for a nice massed look (I plan to pack another three figures on this base). Anyway, Greg and I will try to keep you up to date on how we are progressing with the challenge and hopefully we'll have a game to show for it in the spring! Cheers! Curt
Posted by Curt at 9:47 PM

Sounds like an awesome project... of course I have two boxes of Victrix Brits that I have been afraid to crack open because of all the tiny bits...