This has got to be the fastest Christmas-present project ever... last Christmas my wife bought me about a hundred tiny Star Wars snub fighters from Studio Bergstrom (http://www.studiobergstrom.com/) to go with a project I had been working on for some time... a Star Wars fleet-scale game. 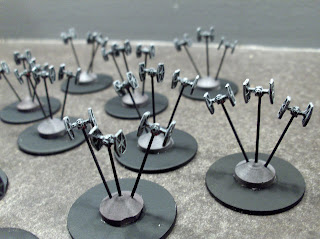 A few furious evenings of painting in January and the snub fighters were done - X-, A-, B- and Y-Wings, TIE Fighters, Bombers and Interceptors, and a tiny YT-300 freighter too. Combine this with Titanium Avenger-class Star Destroyers, converted Micro Machines Victory-class SDs and Interdictor Cruiser and Micro Machine Mon Cal MC80s, and you have the makings of a Thursday night game... 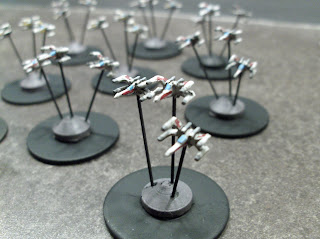 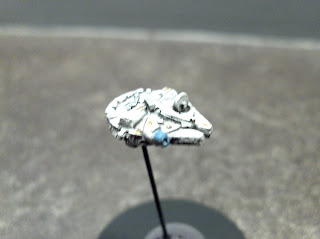 I basically threw out most of the stuff I had painted: seven Mon Cal capital ships versus four Avenger-class ISDs, two Victory-class SDs, and an Interdictor cruiser, both sides with full complements of fighters. The putative scenario was the Battle of Endor, this being the fleet action outside the deflector shield protecting the second Death Star. For rules we used the Star Wars Starship Battles set, with additions downloaded from http://www.boardgamegeek.com/. 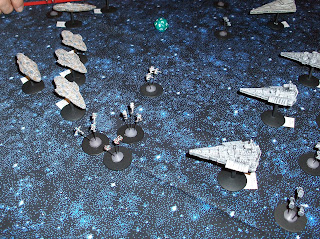 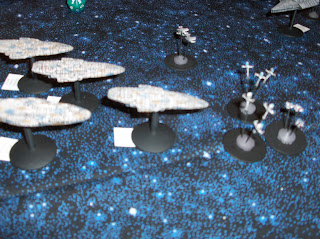 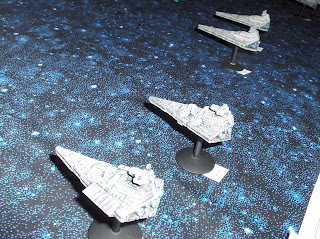 Bill, Dave O., and Dave V. commanded the Rebel fleet while Frederick, Mike F. and Brian ran the Imperials. The Imperial fleet deployed first in a dispersed formation while the Rebels aimed a tight wedge of capital ships at one flank. 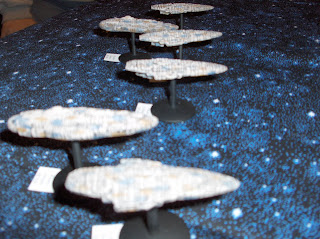 The Rebel strategy proved a winner (well, that and the hot die rolling) as the Rebels never lost the initiative. They threw their fighters aggressively at the Imperial ships, bleeding off shields with snub fighter attacks and Ion Cannon shots, then lit up what remained with their capital ships. 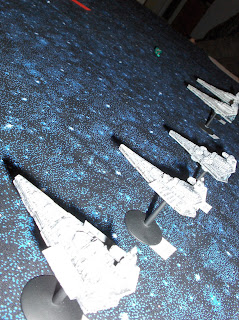 Mike had terrible luck with his squadron of VSDs and Interdictor, while Frederick accounted for an MC80 and Brian swept in from a flank, but in the end it was a stirring Rebel victory. So much for "faith in your friends" being the Rebel weakness ;-)

All in all a fun evening's entertainment. Drew Bergstrom's snub fighters are fantastic models and suit the "fleet scale" to a T. Add in the fact that they're so easy to paint and they are a must for any Star Wars fan. The rules are simple but provide a fast-paced and, with the additions from the Web, semi-tactical game. Let's face it, the whole point is seeing the fleets face off. The only problem is now I need more variety of ships -- perhaps an order from Odyssey Slipways is in the near future...
Cheers
Dallas
Posted by Dallas at 8:33 PM

Dallas, thanks for putting on such a fun game!

The snub fighters look awesome - the photos barely do them justice. Mounted the way you have done, they are so much nicer to use as fighter squadrons than chits or counters.

That is pretty darn cool! Now you need Brian to make a Star Destroyer the size of a ping pong table out of styrofoam and you could do it 1:1!