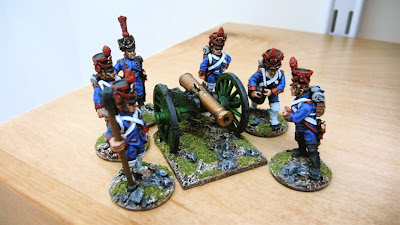 Well, I've been slowly building steam on the assembly/painting of the plastic Victrix stuff I picked up last autumn. I hope to have enough done-up to show a few pics in a couple weeks as I am waiting for a schwack of custom cut metal bases from the U.S. (the plastics are so light that I thought I'd base them on metal stands to give them a little bit of heft). I've been splitting my time with working on those and doing some stuff in good ole metal. Above is a French medium artillery piece and its crew reading to give the Austrians a good pounding. Figures from Foundry. Uniform-wise I prefer the early Napoleonic period as the lads often wore the high gaiters, longer tailed coats and dressier waistcoats. I was thinking of putting these guys on a single base but thought I'd get more use out of them for skirmish games (i.e. 'Sharpe Practice') if I based them singly. 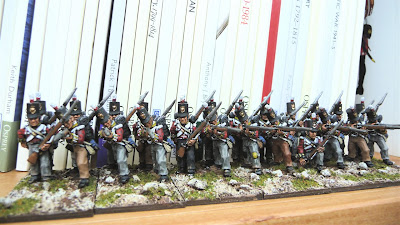 Next is an almost-complete battalion of British infantry (again Foundry castings). They are out of the scope for our 'Challenge' but they were very close to being done so I cracked on and got them based-up. These boys are wearing the early 'stovepipe' shako which was worn in the Peninsula (which I've always preferred to the later, somewhat lumpish 'Belgic' shako). I've painted their trousers in a variety of shades to reflect them sourcing whatever local fabrics from being on campaign. I still need to get two more bases done for the colour party and a few for the Flank companies and then they'll be ready to dust it up with the French. I've chosen to base all my stuff in a compressed frontage (15mm per figure for the infantry) which I think gives a more realistic impression of how the lads would be crammed together in the firing line. Of course it means more figures are required for a comparable 20mm frontage but I quite like the look of it.
Ok, back to the priming booth!
Posted by Curt at 2:14 PM

I like the look of the compressed frontage. Reminds me of the paintings of the period I've seen.