As the summer of 2022 drew to a close, my painting took a few detours away from Horus Heresy themes and into a couple of older projects.  One of those is my oh-so-slow-but-still-growing 28mm Byzantines, last seen on the painting desk in March of 2021! At around that time, I had also assembled and primed a couple of mounted figures to use as officers...and I finally painted them just now :) What is that - a 17-month-or-so turnaround time? Not great - but I still got to them at some point! Anyway, here are two mounted Byzantines, 28mm metal figures from Gripping Beast's Thematic Byzantine figure range. 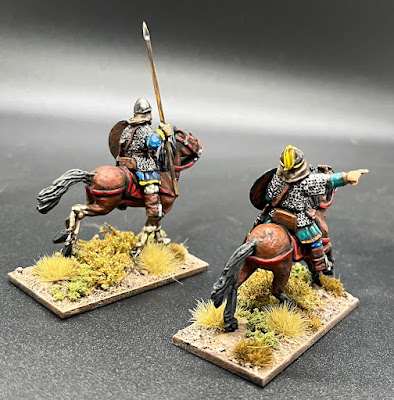 The officers are mounted individually, in bases that will allow them to merge with my other mounted units, and so they participate in anything from a skirmish-style game such as Lion Rampant or SAGA, while still playing in games of Warhammer Ancient Battales, as well as games like Hail Caesar or even Swordpoint.
While I usually prefer decals for my shields, it has been so long since I have been painting Byzantines that I had managed to, um, lose track of where I had stashed the shield decals...so I just tried my best to do a freehand pattern on each shield. It turned out OK.
It was fun to do a bit of work on an older project, and painting these two fellows served as something of a palette-cleanser, a break from the recent painting of Horus Heresy stuff. I also tend to associate painting Byzantines with Curt's annual Analogue Hobbies Painting Challenge, and so working on these fellows caused me to consider what specific painting projects I might try and line up for that...

That's all for now - thanks for reading! Stay tuned for more Space Marines of course, but also posts on some other painting detours from this August and September. Cheers!

I love armies from that period it's great to see you returning to it.