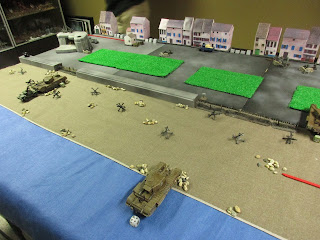 A few weeks ago marked the 80th anniversary of "Operation Jubilee" - the "reconnaissance in force" conducted by the Canadian Second Division (and some Canadian tankers, British commandos, Royal Canadian Engineers, sailors, etc.) against the German-held Channel port of Dieppe. Most who are familiar with the history of the Second World War will be somewhat familiar with the operation - lots has been written about it but the short version is that the Soviets were agitating strongly for the opening of a second front; the western Allies were nowhere close to planning an invasion of France; and Dieppe was proposed as a compromise to take some Soviet pressure off, experiment with an armored landing, and achieve some other limited objectives. TL;DR - it was a disaster. 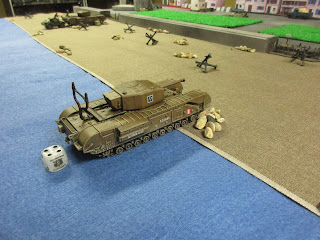 You'll see the landing craft in some other pics, but the way I ran the game, the landing point was designated, a scatter dice rolled, and the contents of the boat deployed. We used Bolt Action for the rules of course. The game was the assault on White Beach directly in front of the town of Dieppe. The Canadians had a platoon of the Royal Hamilton Light Infantry, a Vickers MMG, a Royal Canadian Engineers demolition team in a Universal Carrier, four Churchill MKIII tanks and a Daimler scout car from 14 CATR, and some Royal Marine Commandos in deep reserve. The Germans had a 37mm AT gun, a 75mm AT gun (more on that later), three MG34 MMGs, and a pillbox with MMG, plus two sections of infantry in reserve, coming through the town. 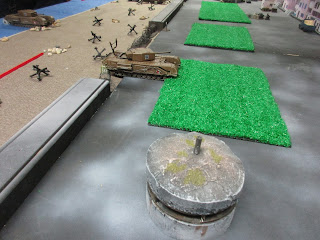 As referee I permitted the Canadian players to land three craft per turn, in whatever order they wanted... unlike the actual battle where the infantry landed first and the tanks were late (NOT GOOD). In the game, the tanks landed first. 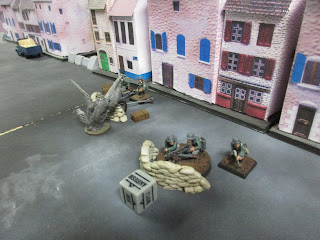 The German MGs didn't have a lot to do at first but get shot at by Churchills... 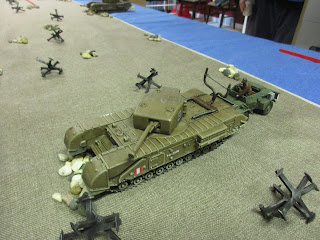 ...which mostly got bogged down on the beach. I was a little harsh with the bogging rolls, to reflect the track-breaking nature of the Dieppe chert - every turn of moving on the beach required a "bog roll" (!) of 2+ on a d6, but this escalated... with a 3+ required on turn 2, PLUS an addition one-pip chance of a bog for every turn made by the tank. This turned out to maybe be a bit too much, as three out of four Churchills got stuck on the beach. There are some notes at the end of this post with more thoughts. 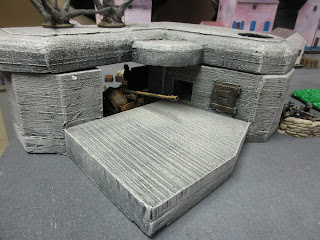 I also put out a really nice cast plaster gun bunker on the promenade - however I was informed that I'd deployed it at the wrong end of the table. The thick side should be facing the enemy. We'll fix that in post-production! 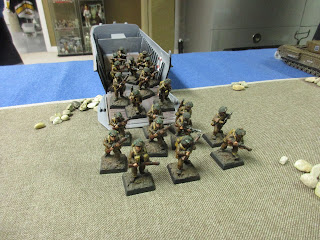 Rileys tumble off the landing craft! 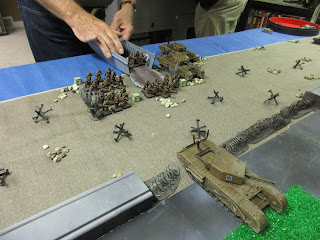 I made the Canadians roll a scatter die to determine exactly where their landing craft ended up. Another tweak to be made on that, next time. You can see one Churchill climbing onto the promenade. 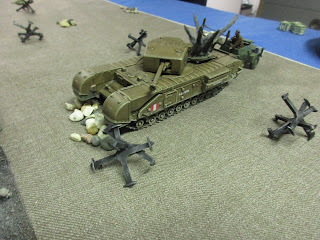 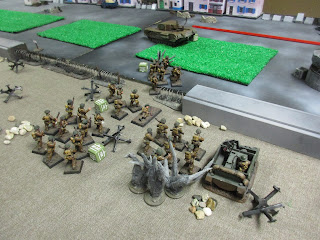 A Universal Carrier full of engineers also landed. They had five demo charges that they could use to demolish wire, anti-tank obstacles, pillboxes, or the concrete barriers blocking the street entrances into the town. 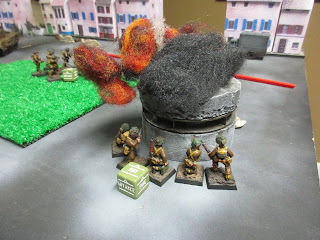 They opted to blow up a pillbox with an MG and crew in it. Pretty satisfying for the Canadian player. 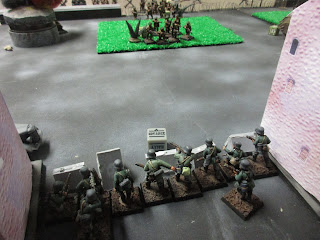 The German reinforcements arrived from within the town and manned the barricades. 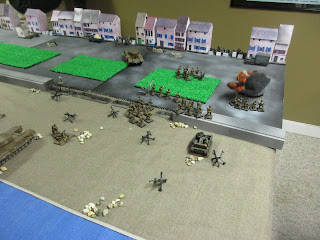 Overview of the action. 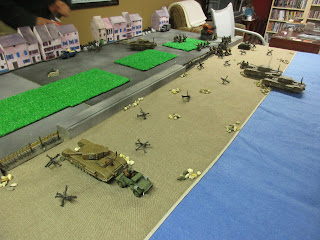 Rileys start to flood onto the promenade. 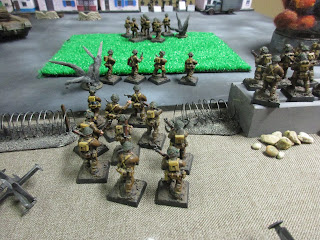 Although lots of infantry got onto the promenade, the game ended before they could get into the town proper.
It was a fun game, but after some discussion afterwards we (I) decided on some special rules changes for next time we play it:
1) Bog check - tracked vehicles are immobilized on a roll of 1 on a D6 at the end of movement if going straight, 1-3 on a D6 at the point of the turn if turning. Wheeled vehicles are bogged on a 1. No bog check required for Daimlers under tow by a Churchill. Maybe add one to the die roll required if the tank is dropped off short of the waterline.2) German A/T guns - make both medium (+5 pen); Churchill armour is 10+, so shots against the front require a roll of 5 for superficial damage, and a roll of 6 for full damage. (I think that the Canadians will only get three Churchills, and I'll make sure to deploy the artillery casemate correctly next time)3) Randomizing landing location: Use D6 and scatter die to determine amount of deviation from selected landing point.4) Randomizing which landing craft arrive in each wave: Assign each 'load' a number and have playing cards of the those values as a shuffled deck. As Canadian order dice are drawn from the cup on the first turn, flip the top card to reveal which landing craft arrives on the beach. In subsequent turns, as the Canadian player uses a die to activate a unit arriving in a craft, the top card determines which craft shows up. This introduces some randomness into unit arrival, as happened in the actual battle.
Stay tuned for a report on Part 2 of the Dieppe battle - the bridges at Petit Appeville!
Posted by Dallas at 1:49 PM

Great looking game with some interesting special rules....shame you ran out of time to see if the Canadians could reverse the historical outcome....maybe a replay is called for?

I liked hearing your thoughts on the game in the summary. A great idea for a scenario- I think it would make a great convention game.

Great looking game Dallas! Nice to see those Churchills deploy (or, at least, try to).