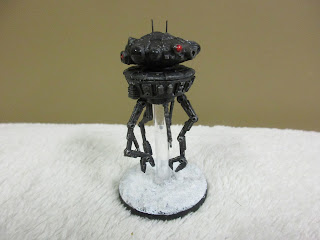 So the Battle of Hoth Star wars Legion project draws near to its close, as I've now received and painted some 3D prints from licensed printer Wargames3D on Etsy - an Imperial probe droid (designed by Skull Forge) and another squad of Snowtroopers (designed by Dark Fire). 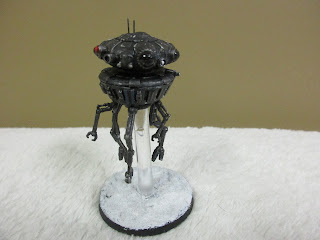 First - the Probot (OK, the "Arakyd Industries Viper Probe Droid"). This is a model that's currently missing from the official SW Legion range, but one that every Legion enthusiast will want in their collection... just a super-cool looking droid. 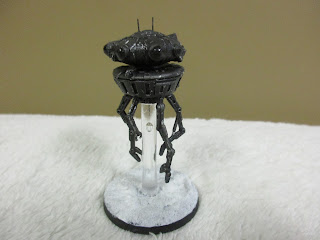 The model was 3D printed in resin and comes in several parts - the "head", "body", and five "legs". A printed resin support stand is included but I substituted my own clear plastic stand. Please don't mind how it's sitting a bit crooked, that's been fixed in post :-) 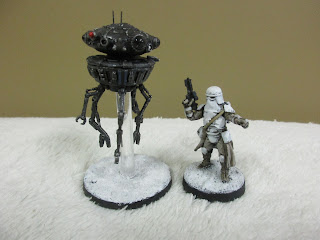 Size comparison with a Legion infantry model. Not much work required on the Probot - I drilled two small holes in the top to fit synthetic broom-bristle antennae, and magnetized the head-body join so the head can rotate. Painting consisted of a basecoat of Vallejo Dark Rubber, light drybrush of Leadbelcher, and a Nuln Oil wash, followed by picking out wear points with Mithril Silver. A couple of the lenses were painted Evil Sunz Orange and Corax White, the rest were painted black. The model was sprayed with Testors Dullcote and the lenses hit with 'Ardcoat gloss finish - done. 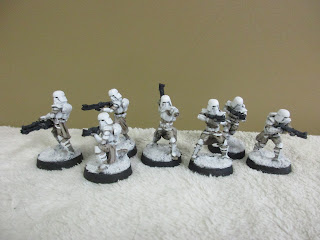 Next up was the Snowtrooper squad. This consisted of seven troopers, two of which tote heavy/special weapons, a nice change from the flamethrowers in the official SW Legion squad mix. These are all one-piece models and came ready to paint, with supports and flash all removed - nice. 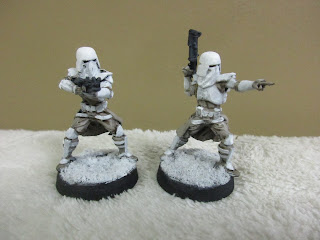 I painted them in my standard Hoth Snowtrooper scheme - basically painting the whole model Rakarth Flesh, and hitting the white armour and face shield with Corax and then White Scar. The RF parts were washed with Agrax Earthshade and re-highlighted with RF. Weapons are black, drybrushed with Mechanicus Standard Grey. 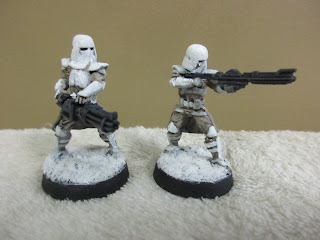 Here are the special weapon troopers. 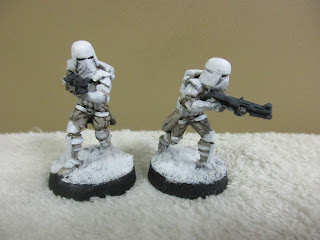 And a couple squaddies with blaster rifles. 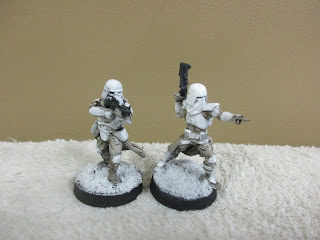 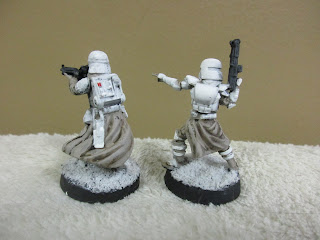 If I had a criticism of the Dark Fire models it's that they're not as detailed as the official models - note the relative detail on the backpack and blaster holster. It's too bad that DF didn't include some of this detail - particularly considering the price point for the squad - it was more expensive than a box of Snowtroopers from FFG. But I think they'll mix together OK and the differences aren't too noticeable.

So I think that's about it for the Imperial side - I now have four seven-man squads, an E-web blaster, a Probot, a command squad, a K-series security droid, an AT-ST, Veers, and Vader. That should be enough for a game at long last!

Great work on these guys Dallas. No Hoth game is truly complete without the ominous Probe Droid...and nice to have an extra touch of variety to the Snow Troopers.

Cool additions to your forces! I like the alternative poses/weapons of the Snowtroopers.