Here's the last Grenadier squad for the Inferalti Hussars. Like the last squad, these guys have been equipped with bolters. The bolters are from the Mark III marine box set and are much bigger than the ones for the Mark IV. This puts them at just the outside edge of suitability for the Anvil models. I can't imagine what they must weigh when fully loaded and the recoil must be a nightmare, but these guys will be facing Space Marines, so lasguns won't cut it! This squad was supposed to complete the army, but I ended up ordering a few more units (of course). The militia and cults army allows you to use heavy weapons squads equipped with heavy flamers and Land Raider Proteus as dedicated transports for grenadier squads. As such, I ordered one of those and a squad of Solar Auxilia with flamers (I'll put 2 to a large base). Might not get to them for a bit because I'm going to try and finish the rest of my Alpha Legion by the end of August. 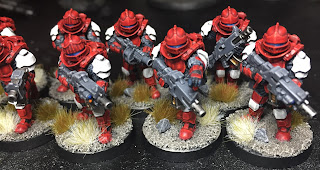 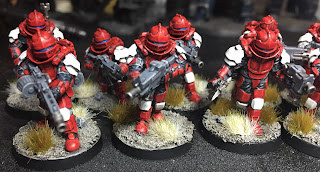 "Supposed to complete the army" - heresy!

As you say, I bet the recoil issues are fun, but surely their armour helps them a bit :)