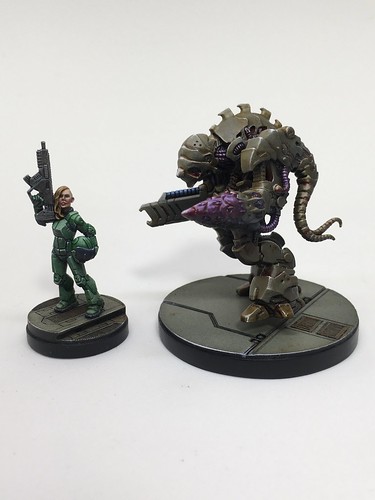 This is the latest addition to my Sedition Wars Project: the Cthonian, a large, tough Strain monster used in the final scenario in the Outbreak Campaign rules included in the Battle for Alabaster boxed set. In the above photo, the Cthonian is shown next to a 28mm Hasslefree figure, that I painted in the same colours of the Samaritan infantry that oppose the Strain.


"Phase 5 Exo-form – Cthonian: A massive conglomeration of evolved bio-mass combined with a powered armour carapace. The outer shell is a fully functional exoskeleton wrapped around a squid-like body composed of extremely resilient tissue. Capable of regenerating damage with dark matter conversion, this creature is nearly impossible to kill without the use of high output energy weapons. In addition to its defensive capabilities, the creature is armed with a gravitic beam weapon and a lethal nano-weapon capable of mutating a living target almost instantly."

Again, cleaning up this resin/plastic model  had its problems, which I outlined when first starting this project some years ago. You can't file it, you can't scrape it easily; you have to cut off mould lines with a fresh, sharp X-acto knife. It took hours with a zirconium nitride blade, and I am still not fully happy with my cleanup job.  I posed the figure lifting one foot, and cocked the head off a little to its left, to add some visual interest. There's a thick piece of wire pinning the right foot to the 50mm diameter plastic base.

I used many very thin layers for the zenithal highlights. Only 6 drops of colour (5 drops Vallejo white and one drop Golden sepia airbrush paints) in the small metal cup in the airbrush, 5 drops of thinner, and the rest water. This was airbrushed downwards at a 45-degree angle all around the model. Then, switching the pigment portion of the mix to 6 drops of only Vallejo white, I airbrushed downwards at about a 60 degree angle from above and in front of the head of the model, giving a spotlight effect on the front of the figure. As I have described before, with such thin coats you don't see the spray pattern of dots of pigment, just smooth transition from light to dark.

The various exposed tubular bits and the flower-like protuberance of the left "arm" (the nano-weapon) were highlighted and shaded with various purples, reds, and pinks from the Army Painter Zombicide Warpaints Sets (Crusted Sore, Toxic Boils, glazed with Zombie Shade).

The chitinous armour plates got several glazes of Citadel Seraphim Sepia shade. The upper portions of the carapace and the armoured face got some punched up highlights with various Vallejo acrylics and artists' oils. I also did some dot filters using oil paints to break up the surface of the plates a bit. 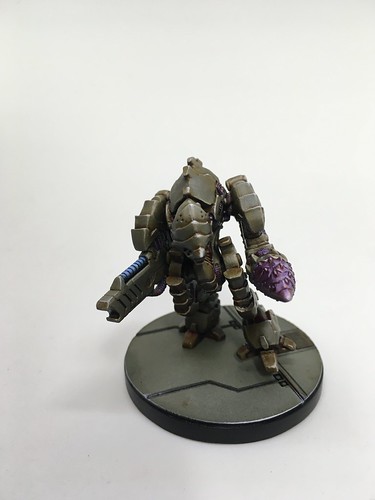 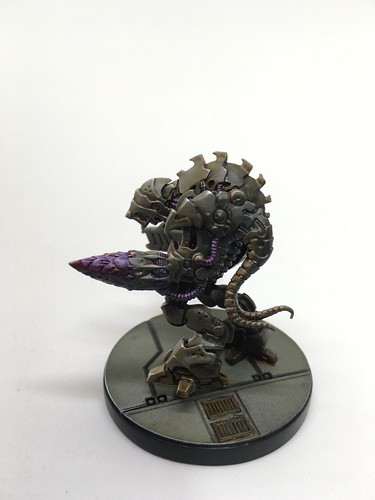 The rear of the figure falls into shadow, but details of its major structures can still be seen. 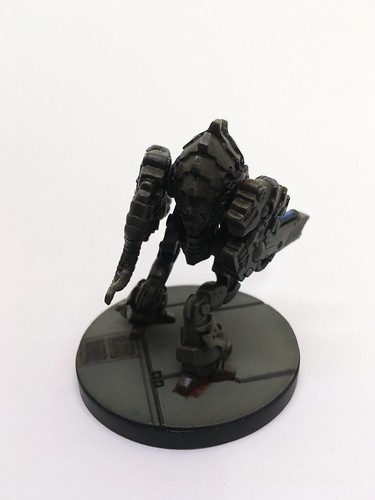 The gravitic beam weapon on the right arm was worked up from Winsor Blue to Titanium White. 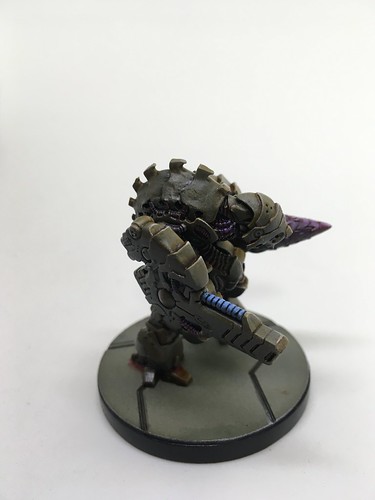 The base was airbrushed with Secret Weapon Stone wash, then finished off with weathering powder and some oils.

After the whole figure got a coat of Tamiya Semi-gloss spray (TS-79), I went back with some Citadel Blood for the Blood God, to add some fresh blood effects. This was used judiciously around the fleshy tubes, the flowery nano-weapon, and seeping from between some of the chitin plates and between the tentacles.

After painting up the figure, I actually like how it looks. It seems to radiate menace, and is a good implementation of the original Studio McVey concept art: 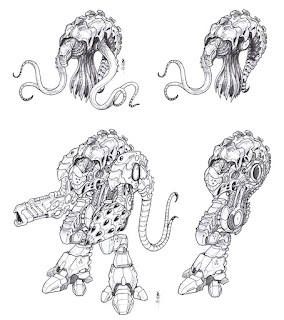 With the 55 figures I have painted up, I can now run all the games in the Outbreak Campaign provided in the basic box, with some extra Strain models to boot.

I recently received some pre-production Strain models, cast in a very crisp resin; easy to work with, and will paint up nicely! I look forward to adding more to this project. With those plus all the extra boxes' contents and some Kickstarter exclusives, I am spoiled for choice
Posted by DaveV at 5:00 PM

Still have mine from the KS sat in a box... Maybe one day.

@Dai, I encourage you the paint up the figs. If you do a search on our blog for "Sedition Wars" you can see that I attacked the contents of the Sedition Wars boxed set in bite-sized stages.

At first I was not a big fan of this particular figure, despite it being sculpted by Kev White, one of my favourite sculptors. However, after getting it together and just sitting and studying the model prior to painting, I have grown to really like it.

I am by no means as fast a painter as some of the other Conscripts like Greg or Dallas. More like "glacial". I do use zenithal highlighting, followed by acrylic glazes and washes (using things like Citadel Shade colours) to help speed up my painting. Specifically using Zombicide paints also helps speed things up, since I am not constantly mixing colours, just working up and down highlights and shadows using the various tones on a wet palette.

For this figure, the longest time was spent on the prep work: cleanup and assembly (man, I do not like "restic"). I primed the figure with GW (Citadel) Chaos Black from a spray can a while ago. I airbrushed the primed figure last Saturday. The bulk of the painting was done last Sunday afternoon during a 3-hour meeting of the Manitoba Model Soldier Society.