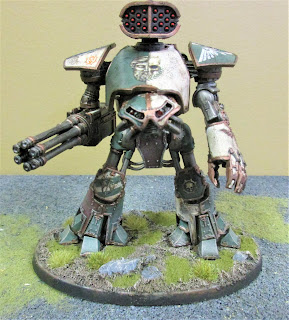 Well, Titan escalation continues to... escalate, building towards the just-announced New Year's Day game. The exact lineup hasn't yet been determined, but is expected to pitch Greg's Legio Gryphonicus and Legio Mortis (on opposite sides of course) against Mike F's Legio Ignatum and my Legio Krytos. So of course it was important to get another Titan painted! 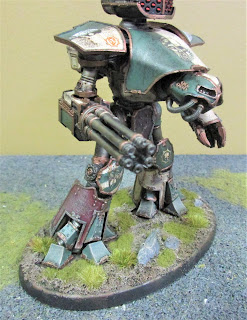 The Reaver is definitely my favourite Titan design. I just love the beetle-backed look of these monstrous war machines. This one was built straight from the kit, mainly because I have a ton of extra weapon arms and carapace weapons from the other Reaver I built. This one also is equipped with copious amounts of magnets to take advantage. 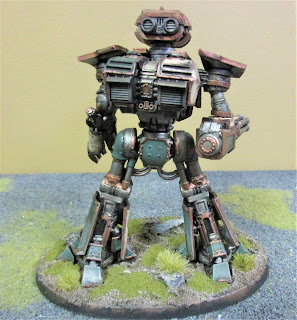 One thing I did screw up on this build (which was discovered too late) was the legs - I assembled them backwards!! Ugh. 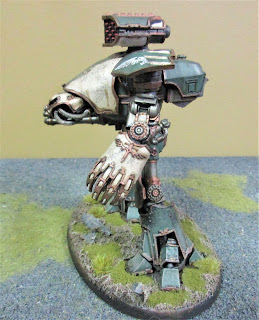 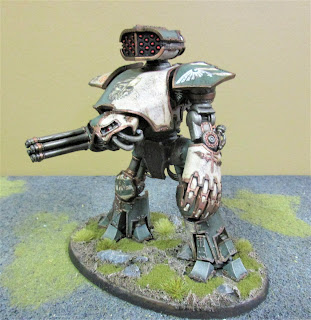 What a cool looking machine eh!! 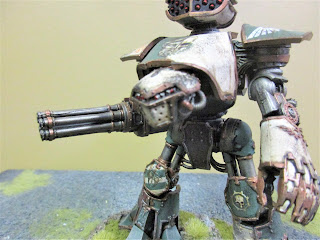 Sorry for the blurry pic - wanted to get one of the alternate head, from the Reaver weapon sprue. I couldn't decide which one to use, so I magnetized them so I can use both. 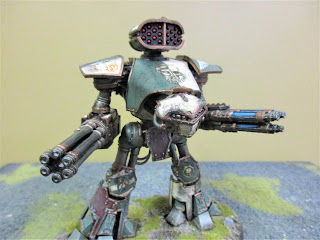 Slightly better pic of the head here. I weathered this model "to the extreme" including leaving a couple of panels (crotch and right leg) in "primer"... simulating emergency repairs made on campaign. 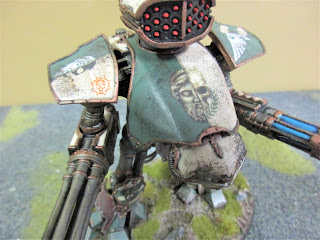 Once again the excellent Legio Krytos decal sheet was utilized. Unfortunately, there's a distinct lack of Imperial eagles on the AT18 sheets, so I pilfered a half-eagle for the left pauldron from a 40K decal sheet.

So with the completion of this Reaver, we've got a full Axion Battleline Maniple - Warlord, two Reavers, two Warhounds. I do have another Warlord kit to build, but first I'm going to paint the Civitas Imperialis buildings that came with the Grand Master edition of the ruleset. I've got 'em assembled now and it looks like they'll be a relative snap to paint.
Posted by Dallas at 6:56 PM

Awesome Titan...I really like that paint scheme and that engine came out perfectly! Congrats on your results.

Thanks fellas! Yes, looking forward to the New Years game - I have no doubt that this Reaver will suffer the fate of all newly-painted models!

An awesome model, the weathering works really well with the colourscheme. Big fan of these decals too, they're amazing.

What a simply awesome piece of work!