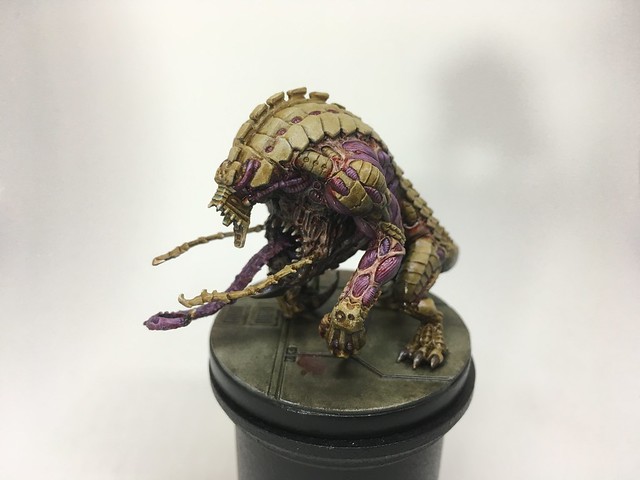 Sedition Wars is very fun, but is currently a relatively unknown board game. Very much like playing Resident Evil, as the hi-tech Vanguard are pitted against the nano-virus-fueled zombies ("Revenants" in Sedition Wars parlance), and other (d)-evolved creatures of the Strain. Always lots of cinematic events.

A little while ago Conscript Byron and his lovely wife Kim shared side-by-side cabins with Jen and I near Clear Lake. With no WiFi, we hiked and stuff in the daytime, and played board games at night. I had originally wanted to bring out a table of terrain and some minis to do skirmish gaming. With the car already full of luggage and provisions for a week away, I decided to bring Sedition Wars as my figure gaming fix. We had fun playing a couple of scenarios with Byron's friend, Thomas.

(Below) I really like the Vanguard miniatures; the Grenadier is a crisp, resin version from Studio McVey, the other two are restic models from the Sedition Wars boxed set. 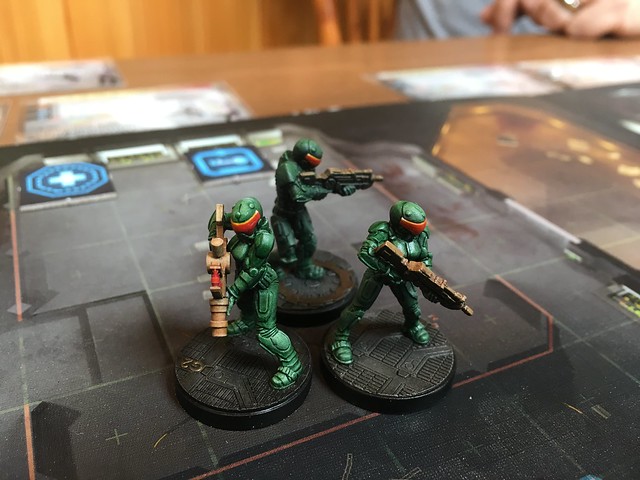 Below are three types of undead Revenants (the most horrific is the one with the deflated human head in the middle), and a couple of "evolved" Strain, a Stalker and an acid-firing Quasimodo. 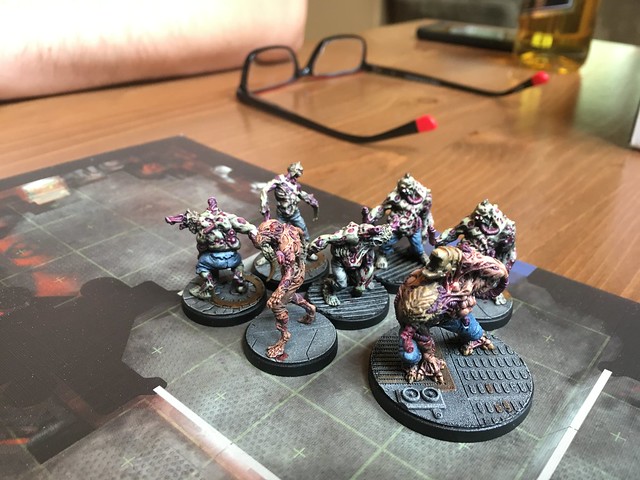 We usually play the game on fully terrained tables, but the cardboard map elements from the game are colourful, and much more portable! 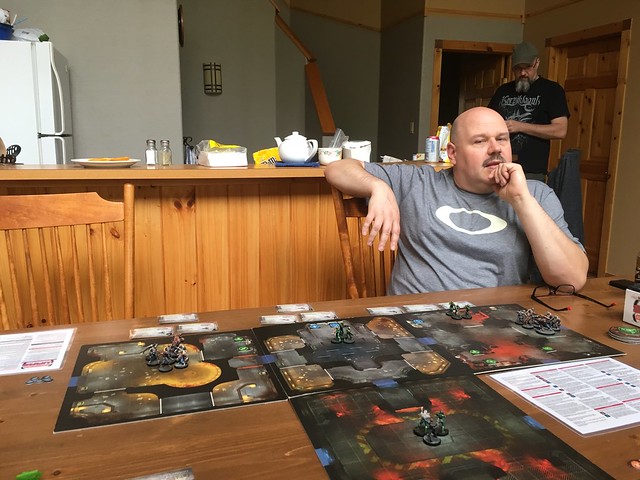 Don't roll low when fighting evil from the depths of space! 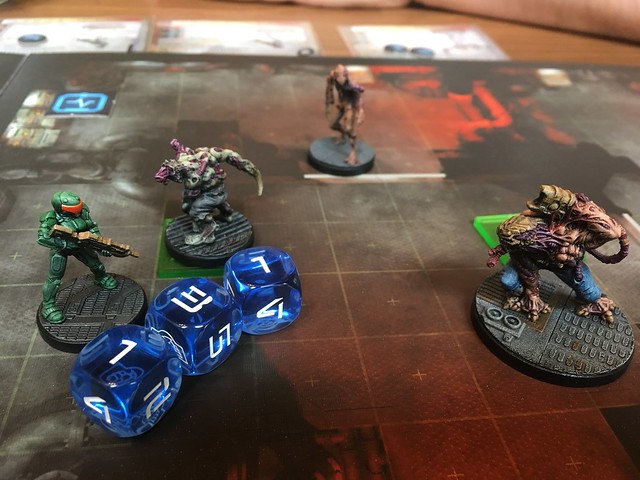 Our recent games prompted me to turn back to my (fairly large) collection of Sedition Wars models. I have the contents of at least three basic game boxes, plus some KickStarter exclusives I picked up online, and some very nice resin pieces from Studio McVey before they stopped trading. I decided to tackle the second-toughest Strain model in the entire game, an awesome Grendlr.

ETA: Here's Studio McVey's post about the design and sculpting of the figure:
https://studiomcvey.blogspot.com/2012/06/sculpting-grendlr.html

To start off with, there were some severe gaps on the restic model, which I filled with epoxy putty . Restic has its own problems, which I outlined when first staring this project some years ago. You can't file it, you can't scrape it easily; you have to cut off mould lines with a fresh, sharp X-acto knife. 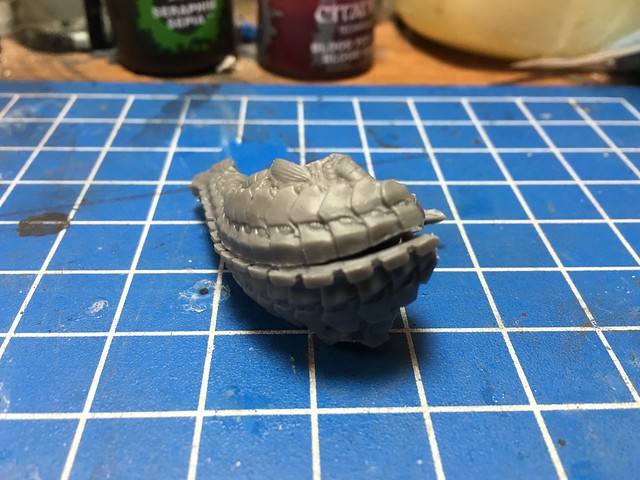 The creature has the in-game ability to swallow a human-sized figure whole, and convert it into something else. Bleah! 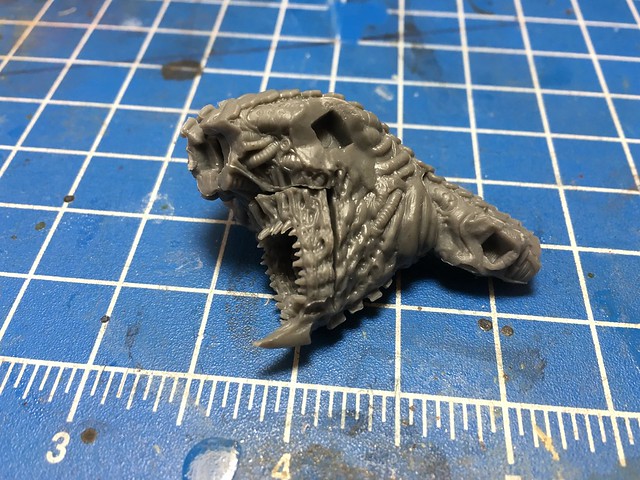 I pinned the tongue to the mouth, and the feet to the base, with brass wire. I drilled extra-deep locating holes for the tentacles.

Studio McVey also provided their own tutorial on the assembly of this model: https://studiomcvey.blogspot.com/2013/01/grendlr-assembly.html

Below on the right is the assembled figure; alongside for scale is a resin alternate sculpt of Kara Black (in the game, she's a clone of the Vanguard commander, actually). 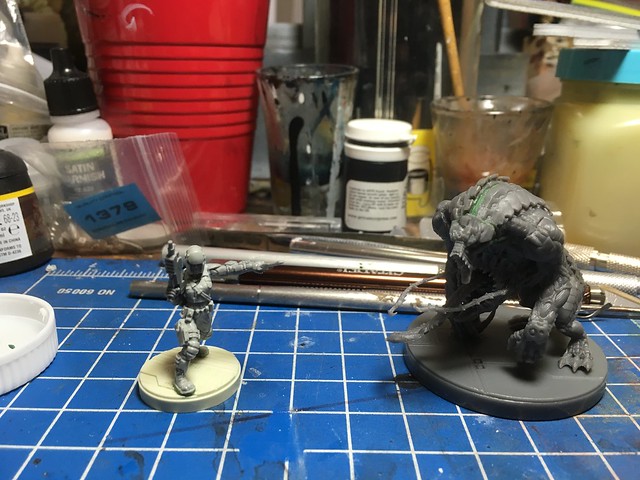 After initially priming the figure with Chaos Black, I started zenithal highlighting with flat white using an airbrush. Partway through the session, the paint started to spatter. I finished the high highlights with a quick dusting of Citadel Wraith Bone (which is an off-white spray can paint used as a base for GW's new line of Contrast Paints). Project saved!

I started from the inside out, as it were. The various exposed muscle striations, inner mouth, tongue, and tubular bits were highlighted and shaded with various purples, reds, and pinks from the Army Painter Zombicide Warpaints Sets (with apt names like "Crusted Sore" and "Toxic Boils"). I used Citadel's new Technical Contrast Medium to add to the paints and washes, which helped with wetness and flow.

The skin areas around the lower mouths and torso were glazed with Citadel's old Ogryn Flesh wash, then painted with tones from the Vallejo Face Painting Set. The chitinous armour plates got several glazes of Citadel Seraphim Sepia shade. The claws and teeth were highlighted with various P3 and Vallejo cream and off-white colours, then glazed with Army Painter Zombie Shade. The upper face (with the guns) got some NMM work.

The base was glazed with Secret Weapon Stone wash, then finished off with weathering powders and oils.

After the whole figure got a coat of Tamiya Semi-gloss spray, I went back with some trusty Citadel Blood for the Blood God, which provides a suitably viscous, fresh blood effect. This was used judiciously where skin was tearing, and dripping from a couple of claws.

The gaping maw is truly disturbing, as Jen opined. 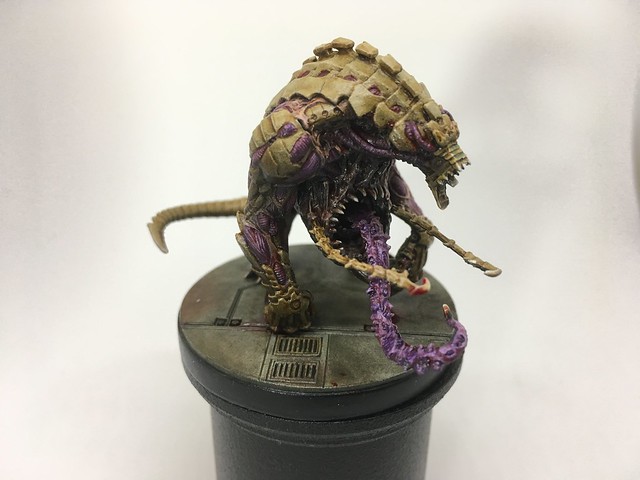 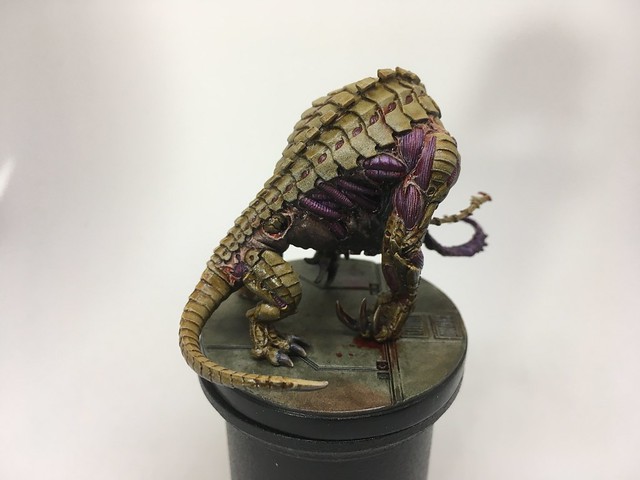 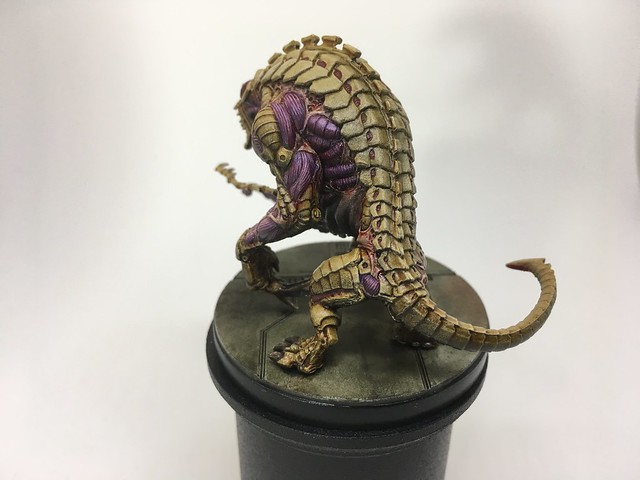 With this figure I can now run 8 of the 9 scenarios in the included Outbreak Campaign setting.

The only model left to do is the Cthonian, a large, tough model used in the final Boss Fight. I actually find the model to be a little underwhelming, not having the bulk of the Grendlr. I have at least three of these, so I could paint up one as stock for play, and convert another with some GW Juggernaut parts I already have. 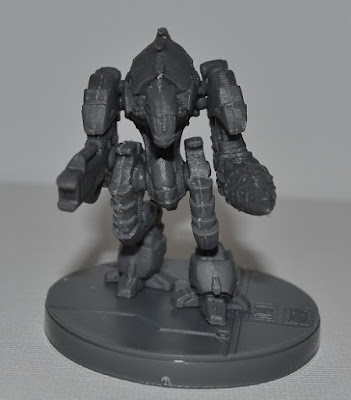 Keeping Track of the Strain

I had previously labelled the various identical Vanguard models with etched brass numbers, to keep track of the similarly-armoured and -equipped models during play. From our recent games, it occurred to me to do the same for the Strain. So, I used etched brass letters from Hasslefree Miniatures to label the Revenants, Stalkers, and Quasimodos from, literally, A-Z. The remaining, larger Strain have no dupes, so there's no need at this time to label them (likewise there's no labels on the individual, named heroes on the Vanguard side). I affixed the brass letters with Micro Krystal Kleer, and washed them with a bit of GW Nuln Oil to help pick them out. 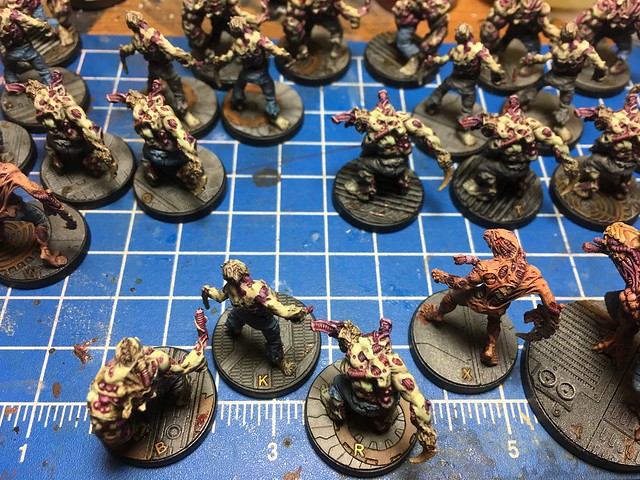 So far, it's 53 models (plus a bunch of terrain) for this ongoing project. For immediate carry and play, I got a foam insert from Battle Foam which fits in the original game box. It holds the figures I have completed, plus dice, counters, rules, and the cardboard map boards. It doesn't hold the models' printed stat cards, which I have sleeved to use dry-erase markers on, to track wounds. 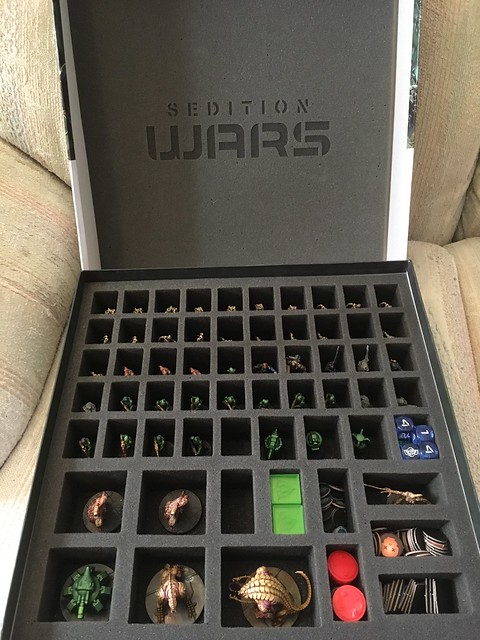 With another 30+ Vanguard, including some awesome heavy powered-armour resin figs, and a horde of Strain, I could be painting SW stuff for years to come! 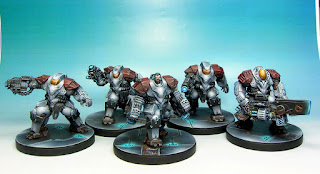 Wow, terrific brushwork!
I spend a lot of money on the KS back in the day, but wasn't happy with the quality of the plastic models when they arrived and sold it of.
Great to see the game is still alive.

Oh my goodness, these look amazing!

I too got super hyped for this game when it came out, but like so many was horribly disappointed by the finished result.

Which is a damned shame because the minis look so good when well painted and the game rules weren't half bad at all.

Love your paintjobs on these. Kind of inspiring for me to get back to mine.

Great job on these, always satisfying to make good progress on a project that’s been hanging around for a while.