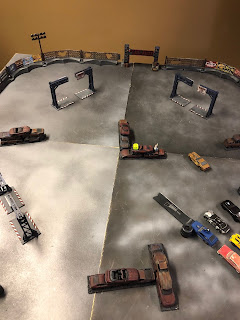 Last Thursday (my birthday!!) I hosted the lads for a game of Gaslands. We tried "Death Race" again, we'd played the scenario before but not all the way through, but this time I arranged the "start" in a bit better way. Conscripts Greg, Mike F., Dave V. and myself each fielded a team of two cars (40 cans). Conscripts Byron and Kevin spectated.

The Death Race comprised three gates - the first at top left, the second at centre right, and the third (finish line) at top right. Starting grid is at bottom/centre right of the picture. The gates have to be crossed in order, with each car's weapons activating only after it passes Gate 1. 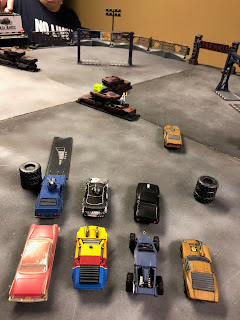 I rolled the high die and scored pole position for Team Babypoop Brown, so I placed car #56 first on the grid with my #13 Miura directly behind. Mike, Dave and Greg lined up accordingly. Dave's cars were the Plymouth Fury ("Christine") at bottom left and the black Interceptor. Mike had the blue car at top left and the "MFP" Alpine, while Greg gridded the black-and-white camo prototype and the blue buggy. 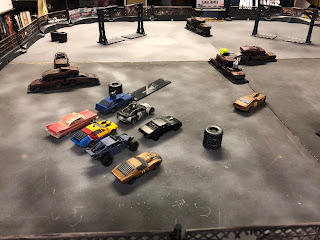 Car #56 gets the holeshot and screams off towards the first gate. 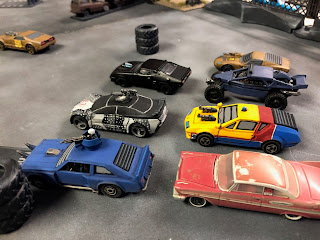 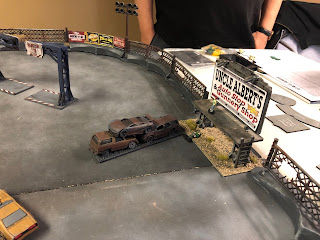 (Gratuitous shot of a billboard here) 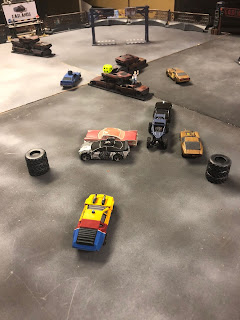 My team got off the line well but there was some chaos elsewhere in the field. Some execrable dice-rolling from Gaslands noob Greg had hime somewhat frustrated off the hop, and hazard markers accumulated rapidly on his and others' cars with some wipeouts happening even before they were halfway to the first gate. 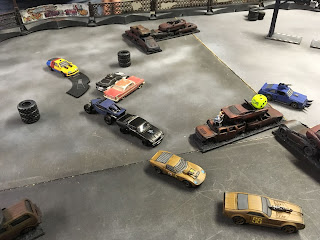 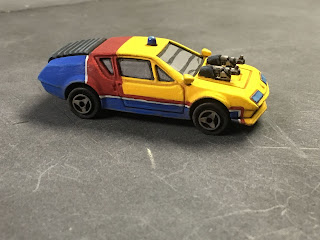 Had to include a closeup pic of this car - outstanding work Mike! 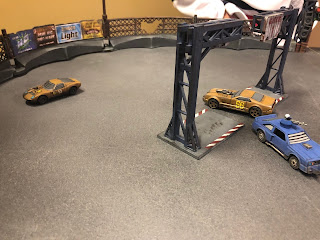 Team BPB in the lead passing the first gate. The #13 Miura got a screamer of a start and was into 5th gear, overtaking the polesitter before they reached Gate 1. 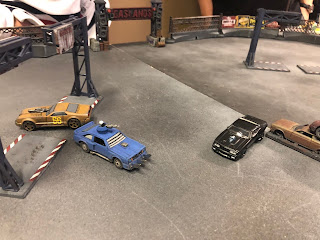 Behind them, things were a bit hairier with cars pointing in every direction. 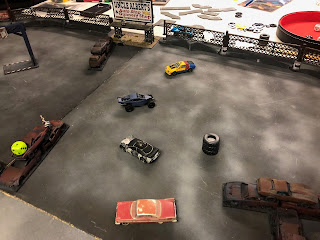 See what I mean?? 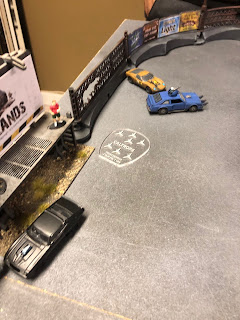 We've skipped ahead a bit here, but what happened was that #13 ended up wiping out into the wall just past the gate, and was turned 180 degrees by Mike. Above we see him moving off into a collision with Mike's blue car. Dave's Interceptor has overtaken both and left caltrops behind. 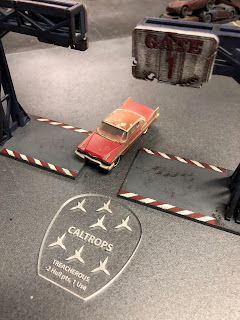 More caltrops made the gate a bit dangerous! 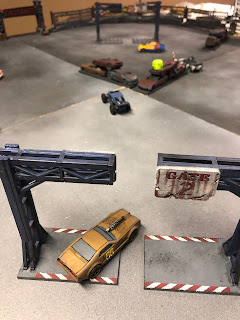 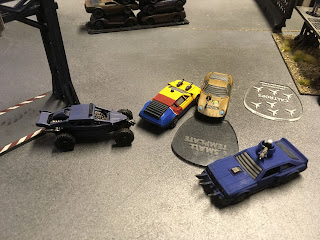 Meanwhile, just past Gate 1, things were a mess. Car #13 had dropped mines but then wiped out again, and was spun around to face his own minefield - awkward. Greg's buggy was definitely making its presence known with HMG up the fundamental aperture of the MFP Alpine. Mike's turreted car sprayed bullets everywhere! 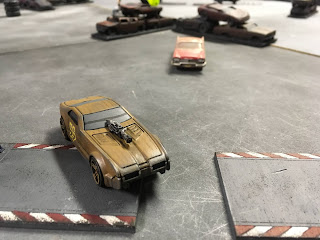 Car #56 crosses the line to earn the win. Dave's "Christine" had done a u-turn after passing Gate 1 and was manouevring to line up a shot at the leader, but missed. The driver of #56 certainly savoured the victor's champagne!

This was a super-fun game. Death Race works better with lots of space on the grid, and as any player knows, the play slows down significantly through collisions etc. when cars are being operated in close proximity. Once the field spreads out a bit things start to rattle along more quickly.

I'm still quite excited about Gaslands and many of the lads share that enthusiasm. Half of the fun is converting and painting the cars, of course, and I need to get back to the worktable on that score!

Cracking report and love the cars especially that MFP Alpine.

This was a lot of fun. My “start” wasn’t too clever, but I’ll know better for next time...

I had a lot of fun! I am going to have to get another Ford Falcon to paint it in MFP colours.