It's been a busy summer this year. I took a long block of Holidays off in July and the family spent a chunk of it at a cabin in Whiteshell Provincial Park. I took some stuff to paint, but progress was slow. Work itself has been busy with little opportunity for time off and the spare time that was available was used for things other than painting. With all that being said, I still managed to complete another unit and vehicle for the Imperial Fist Legion. The Templar Brethren have been pending since I started the army. They were left as a reward for hitting the half way mark with the army.
I used the Mark IV armor as they are supposed to have the best wargear available. According to the fluff, they are the elite of the Legion and dedicated to close combat. These guys would eventually become the Black Templar during the second founding and turn into a fundamentalist cult army burning all non-believers in their wake. It's the stuff of nightmares and I could see how a chaos cultist may convince you that grandfather Nurgle has 'something' for that 3rd degree burn you're sporting. The Templar Brethren seem to just like to sword fight.

The Land Raider was originally bought for my 40k marine army. It has parts from Chapterhouse Studios (now MIA it seems) to give it the Heresy look. The Raider, along with a Storm Raven (also with C.H. parts) were just sitting on the forgotten pile when I clued in that they could be re-purposed for the Fists. I didn't bother stripping the model and just hoped the detail wouldn't be lost. I think it turned out all right. 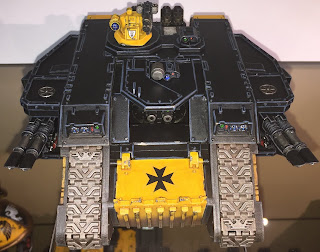 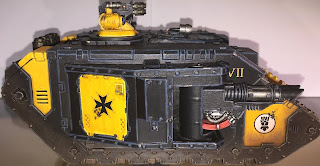 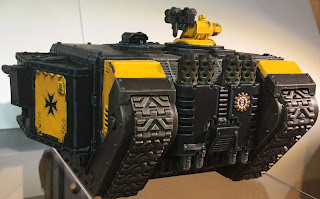 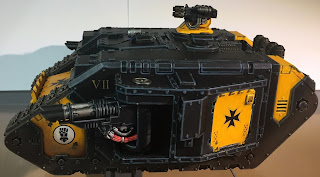 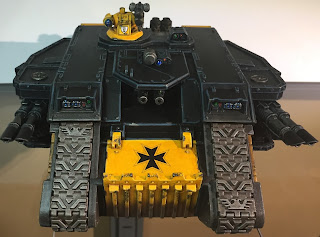 I still have more Imperial Fists to paint, but I plan on taking a bit of a break and work on some units for Kill Team.
Posted by MFraser at 5:47 PM

Loveky work there, keep at it!

Both infantry and tank look fantastic. Call it a job well done on them all.

Great work as always Mike, and inspiring stuff! I need to get back to some 30k myself...

So good! Brilliant job on the yellow. I've always found it second only to white as a difficult colour to paint.