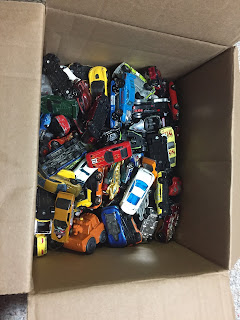 We have to admit to having been a bit remiss lately in updating the blog. Blame summertime, work, life, or what you will... but there has been some stuff going on, honest! So what's going on in the picture above? GASLANDS, that's what! 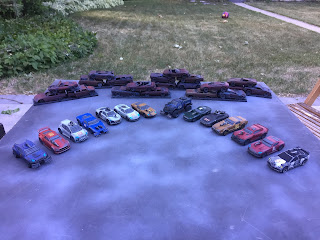 Gaslands is a miniatures game of vehicle combat, published by Osprey, that uses Hot Wheels/Matchbox-scale cars converted with guns and other fun stuff. 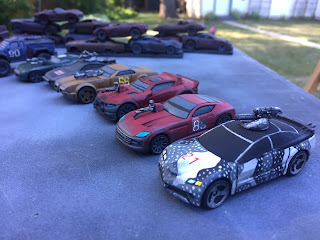 Conscript Kevin H turned me on to the game a few months ago and wow- is there ever an active online community for this game. In fact, it's so popular that the package I ordered directly from the game's author (including the rulebook, templates, dice and markers) was significantly delayed in being delivered. 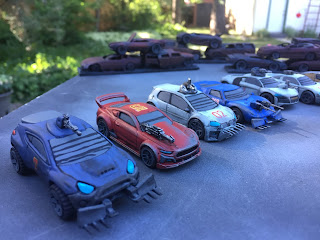 However, this did little to temper my enthusiasm which was still running at a high temp... 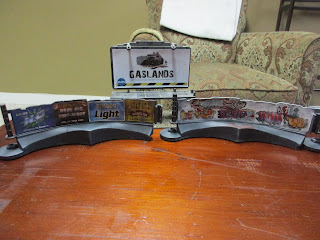 One of the things that I find really exciting about Gaslands is that the barrier to entry is so low, you can go nuts doing all the stuff that makes the visual aspect of the game so cool.

Case in point - the "arena terrain" that I've done up for the game. My vision of Gaslands really tends more towards the classic "autoduelling" I grew up with - Car Wars and the like - rather than the "Mad Max" kind of vision that the game also supports. Don't get me wrong - that's amazingly cool as well and I'll probably go that way too! 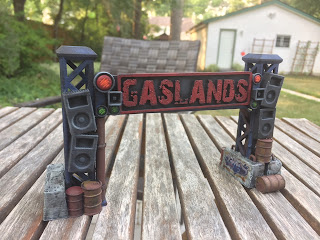 This amazing piece is from a company called Corvus Games, and while it may look like a resin piece it's actually a plastic 3D print! It painted up very quickly and looks great. There was even room for some graffiti on the concrete base, visible above. 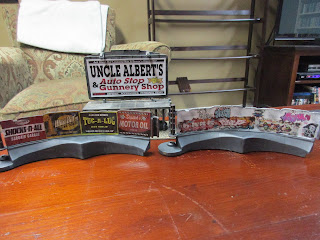 The barriers are from a Disney/Pixar (!) CARS (!!) playset I saw used on one of the Gaslands facebook pages. It takes two sets to do a 4x4 table but the cost of those sets is only around $25 each, plus time and effort in painting of course. I used photocopies of the playset's advertising decals on the walls, just to dull down the glossy kid's toy look. 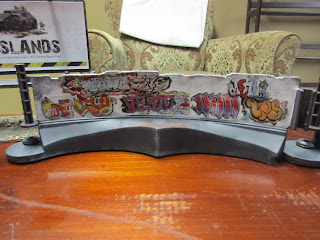 Rather than repeat the same billboards twice, I went with graffiti on two of the walls which turned out well. The "tags" are decals marketed to HO-scale train enthusiasts for their freight cars. 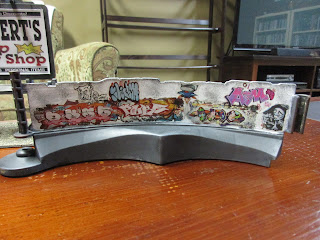 I tried them at first on a darker coloured background but they didn't "pop" nearly as well as on the light background. Easy fix. 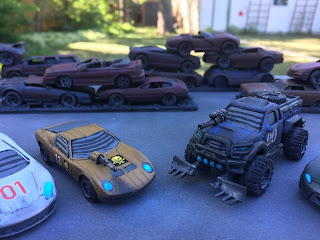 Back to terrain and the cars... I wanted some LOS-blocking terrain for inside the arena and stacks of wrecked cars suited that perfectly. I smashed some cars with a hammer just to flatten them a bit, then superglued them to each other and to a card base. Sprayed the whole lot black and drybrushed up faded colours, dust and rust. 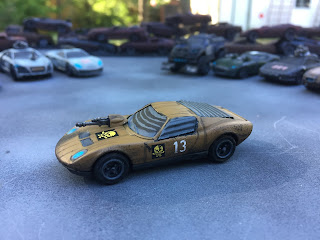 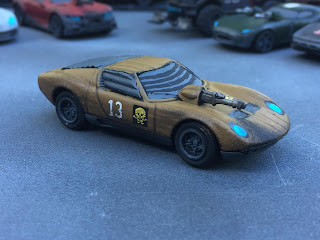 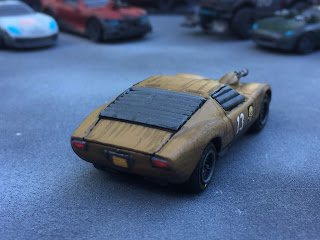 Here are some cars! One of my favourites - Lamborghini Miura with corrugated iron windows and weapon from the old Dark Future game. 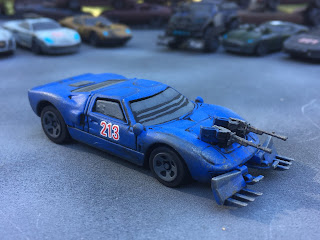 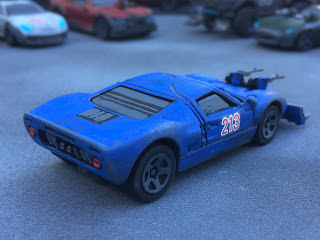 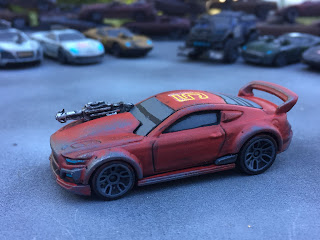 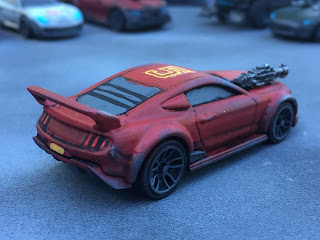 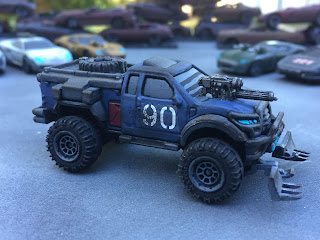 Pickemup truck with DF minigun and rams from the 15mm tank kit. 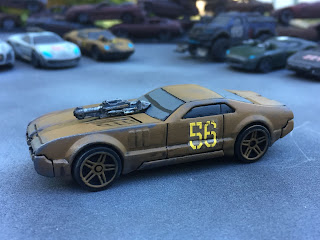 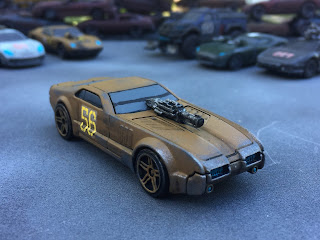 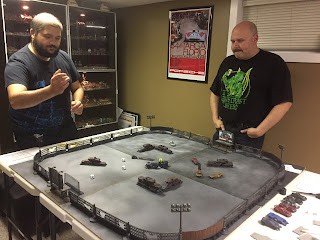 So with all this prep work done it was time to have a game! (Note that some of the terrain shown in this post only got finished later) 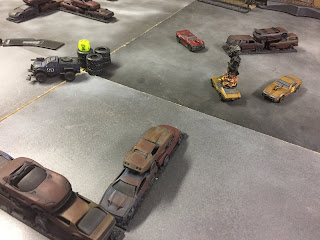 Conscripts Indo, Byron, and Kevin were over for the inaugural run at Gaslands. 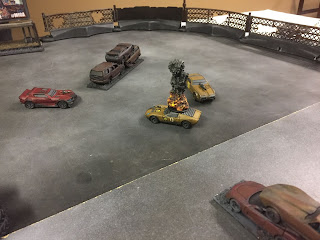 The game itself was controlled chaos, which is perfect for a vehicle combat game! We found the mechanics to be very easy to pick up, and with a view small exceptions they appeared to make sense in terms of vehicle physics. 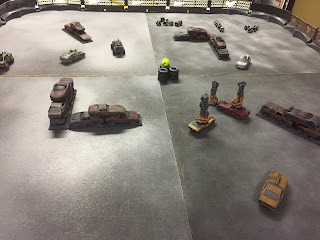 One of the fun things about the game has to do with the movement, which is all done by templates a la X-Wing and other games of bodies in motion. Players select a template for their move, based on their speed (i.e. templates for different maneuvers have restrictions as to how fast a vehicle may be going to use them). There's no pre-measuring though, and in order to speed play, there's a rule that if you touch template when it's your turn to move, you MUST use that template! and if the speed of your vehicle does not allow you to use that template, the player to your left gets to pick a maneuver for your vehicle, then move your vehicle accordingly! This simulates a momentary lapse in the heat of combat driving, and when it happened to Indo in our game it was most amusing :-) 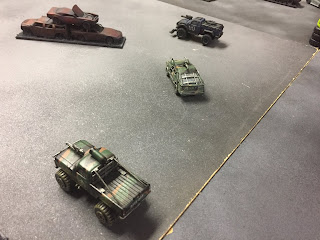 Kevin arrived late from work but got to roll out his ancient "Team Anarchy" vehicles he painted to use with Dark Future when it had first come out (!). They did acquit themselves well!

Without going into a ton of detail on the game (which I have forgotten anyway), it was a great one and fun was had by all - so much so that I'm going to tee it up again this week for the group. I think that this would be a great "convention" game and I'm planning on running it at PrairieCon next year, if not Legio-Con as well. So if you like Gaslands, definitely stay tuned here for more!
Posted by Dallas at 1:26 PM

Great stuff Dallas - I love all your vehicles and especially your terrain. We tried out the rules a few months ago when one of the owners of the local comic shop put on a game for us. What a hoot! We found our driving to be more of a menace to ourselves than our opponents!

Thanks! We did play again last week with the completed terrain layout and I'll be posting some detailed photos of that as well.