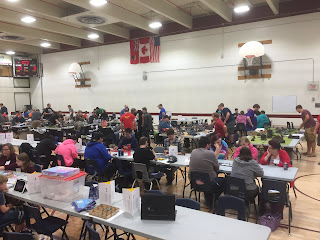 This year, in accordance with ancient tradition, we loaded up the wagons and headed out to PrairieCon in Brandon, Manitoba. Conscripts Greg, Byron, and me each ran a game, and we were pretty chuffed to meet up with Original Conscript Curt who came out from Regina to play in our games and run an amazing game of his own just for us! 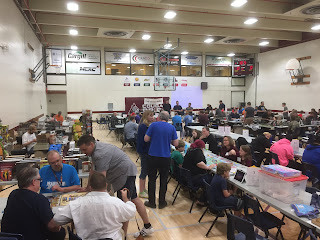 Here's a view of the Assiniboine Community College gym, which hosted many of PrairieCon's miniatures games. Fortunately for us, our games were tucked away in a quiet corner of the cafeteria upstairs :-) 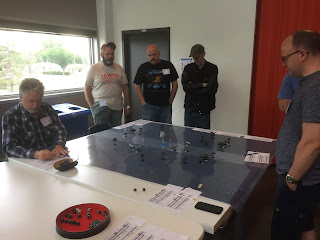 First up on the weekend menu was my Battlestar Galactica fleet-scale game using the Colonial Blattlefleet ruleset. Due to a bit of confusion in the convention program, some of the people who signed up thought they would be playing the BSG boardgame which is... quite different from Colonial Battlefleet (they assured me that they had fun anyway). 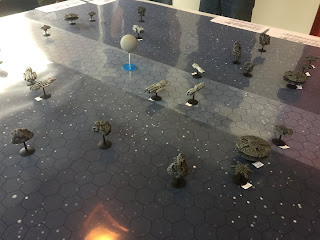 The scenario fit into the general PrairieCon theme this year, which was "It's a Trap." The Colonials had grabbed a breather to refuel and refit but were surprised at anchor by a Cylon fleet and had to make good their escape. 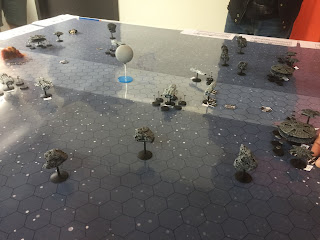 The Colonials were deployed roughly around the planet with the Cylons split between the long table edges. The Colonials had to escape from either or both of those long edges. 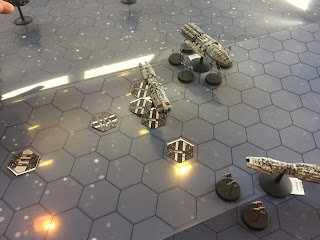 As in the TV show, once the fleets were engaged the missiles began to fly fast and furious! 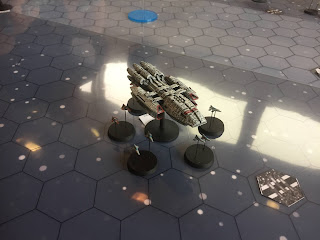 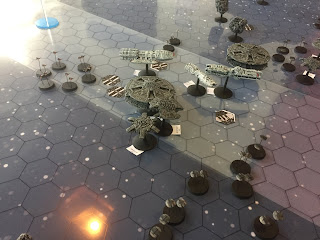 Then it really got fun - close quarters battle between man and machine! We found that the Battlestars were pretty impregnable though - the amount of point defense and flak they could throw out made it very difficult for the (admittedly far more numerous) Cylon Raiders and Heavy Raiders to deal them much damage. 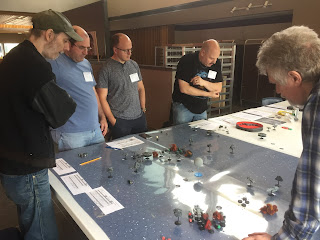 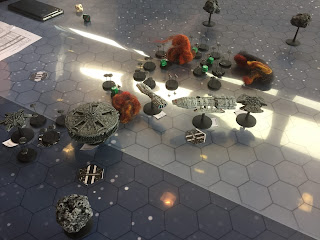 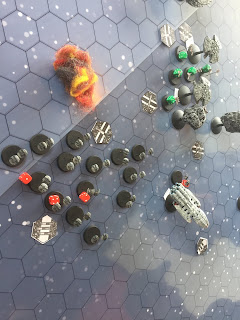 However, as someone once said "quantity has a quality all its own" and if you get enough Raiders (red dice) into action... 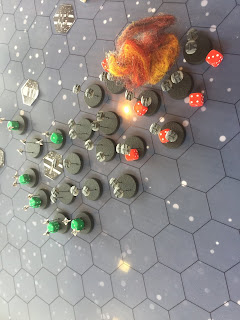 The ended as a Colonial victory... if you can count the loss of one of the three Colonial squadrons as a "victory". The fact is, every Colonial ship destroyed and crewman killed is a loss that can't be replaced. Cylons can always produce more robots and ships... 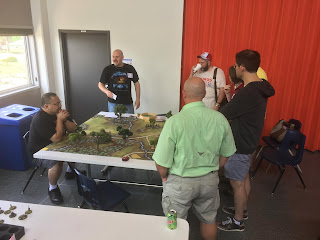 Conscript Byron ran a game of the Two Fat Lardies' "Through the Mud and the Blood":

The year is 1915, the Germans have just launched their first chlorine gas attack and pushed the Allies back.  The Canadian forces of the 10th and 16th Battalions have been ordered into Kitchener’s Wood in a counter attack in the middle of the night with no reconnaissance.  What could possibly go wrong? 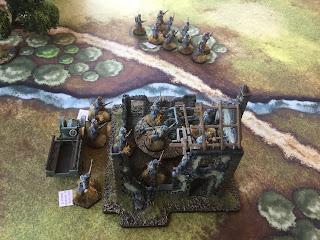 Here we see the French holed up in a ruined farm, ready to defend against the German attack / bug out (delete as appropriate). 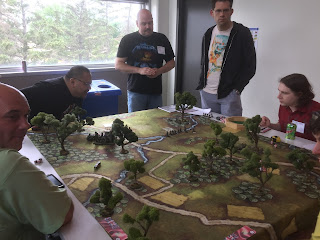 Byron ran the game with a masterful hand... 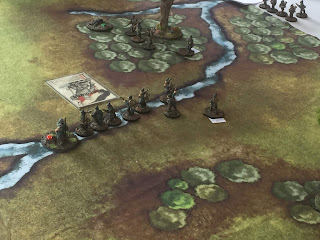 The accessories he made for the game are outstanding in quality. Here we see one of his custom cards. The unit blinds are also pretty striking. 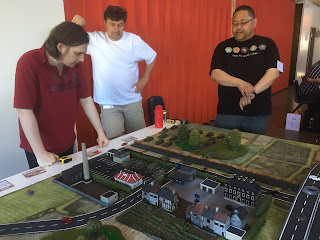 Next up was Greg's game: Team Yankee based on the battle of Blickheim in Macksey's excellent book "First Clash":

The year is 1986, and the forces of the Warsaw Pact have invaded West Germany.  NATO allies respond, Canada among them.  The 4th Canadian Mechanized Brigade Group moves into position to counter the advance of the Soviet 1st Guards tank division.  Leopard C1s and infantry of the Royal Canadian Regiment will clash with T-72s and Soviet Motor Rifle troops! 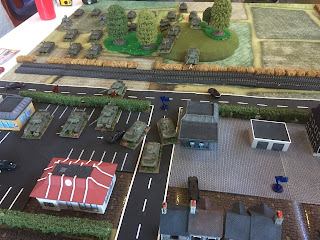 In keeping with the convention theme ("it's a trap", remember?) Greg's scenario had the Soviets advancing pretty much unopposed towards a town, only to be ambushed by a mighty Canadian armoured squadron! Here are a couple of photos but Greg has done a comprehensive battle report, found here. 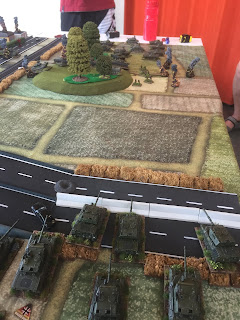 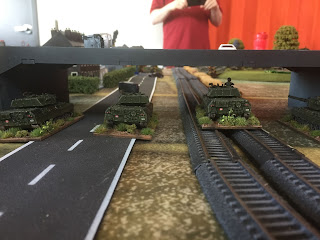 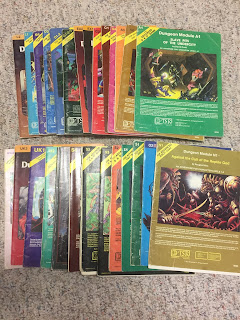 One last thing... I was pretty pleased to be able to pick up almost 30 classic AD&D modules from the collection of an old buddy and his younger brother. Nice eh? They were expensive, but I'm sure I could get something back from the duplicates if I wanted (I now own three copies each of "Tomb of Horrors" and "Expedition to the Barrier Peaks") and buying them all in one go saves future time and effort in looking for the ever-elusive "bargains"... at least that's what I told myself at the time :-)
Posted by Dallas at 10:16 AM

It was a great outing this year! I’m kinda glad we scored the quiet little section in the cafeteria...

Looks like a bunch of fun games, and that AD&D haul is pretty great!

What mat did you use for the BSG game?

Thanks guys! I can't remember who made the mat - I'll have to check. The hex overlay was kindly provided by Conscript Kevin!