Since I started collecting my 30k Imperial Fists, I've been thinking about how to best represent the Battle of Terra. There are a few examples such as this and this, but these are more of diorama displays and not quite playable battlefields. The breaching of the Imperial Wall protecting the Emperors inner palace has been a part of the Horus Heresy story for as along as I can remember (which was 2nd edition). How do you capture the grandeur of the wall and still make it playable? My solution was to make the entire battlefield the breach in the wall and the remaining wall sections bookmark the table. I envision the Traitor forces rushing into the center of the table to exploit the breach which is being defended by loyalist forces. The loyalists have thrown together a desperate defenses out of the wall rubble, while more loyalist reinforcements rush in to plug the gap. This would be a mega game befitting the Battle of Terra.

To make the wall I used some large pieces of Styrofoam I found in my garage rafters (the previous homeowner liked to store stuff in the rafters apparently) that served as the wall and various rubble pieces. The Styrofoam wall sections were then covered in drywall patching tape followed by several layers of drywall mud. Once dried, they were sanded and given a thick coat of primer. 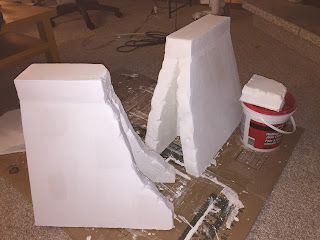 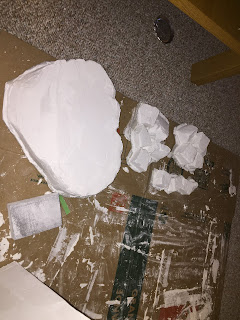 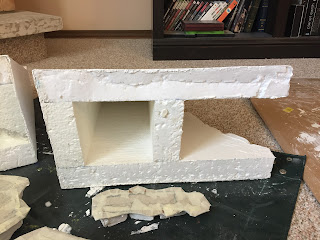 I then sprayed textured paint over it. This still caused some sections to be eaten by the spray, but I persevered and repaired these sections through a process that is too ridiculous to lay out in this blog. At times I thought I was actually building a wall!
I then cut strips of plastic I found at Lowes and glued them onto the front of the wall to represent some metal details. Furniture nails were used to represent studs. 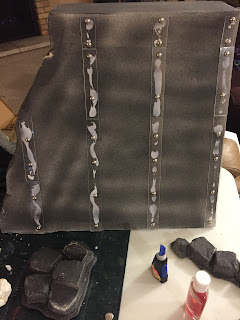 I bought some MDF and resin pieces from TT Combat to add some details to the walls. These include firing steps up top, stairways at the back and a resin hatch to enter the wall. The entire structure was painted with craft paint, GW leadbelcher and Nuln oil wash.
I quickly set up a 6x4 board to demonstrate the scale of the wall. The green flocked board doesn't work with the wall in my opinion, but Dallas has several options that would work better I think. 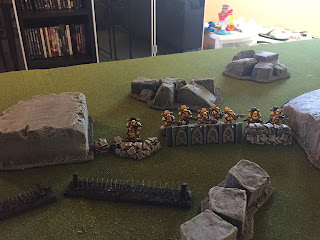 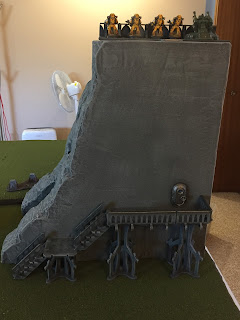 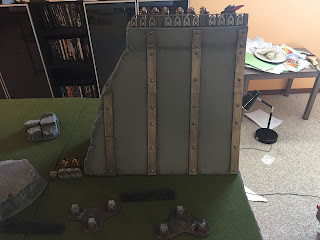 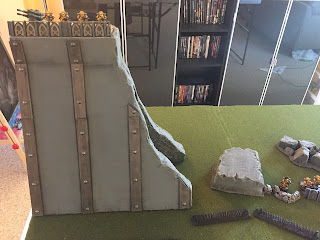 So hopefully after I get a few more units painted for the Fists, we can roll this out for a mega game this summer.
Posted by MFraser at 2:14 PM

Mike - this is brilliant!! Great work!! Can't wait to try out a game with this stuff on the table!!

Throw that onto the trench board and I think you are in business.

Looks cracking (excuse the pun) and certainly has the desired look and feel of an imperial fortress.