Here is the first entry from this years Analogue Hobbies Painting Challenge.  A Nurgle rhino and a pair of Tohaa from Infinity.  The painting process on the Rhino was pretty slow on due to the large number of washes involved. 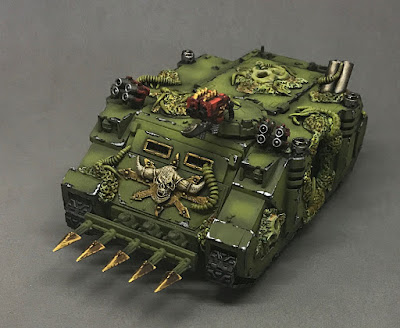 First up is a Nurgle Death Guard rhino for my 40k force.  The rhino started out as a used kit from a friend that no longer wanted it, so it was already painted for Khorne.  That didn't matter a whole lot as anything being used for Nurgle needs about a metric tonne of green stuff before its ready anyway.

Here are some photos of the green stuff work done after ripping off the doors. 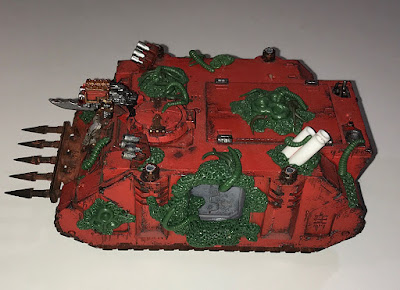 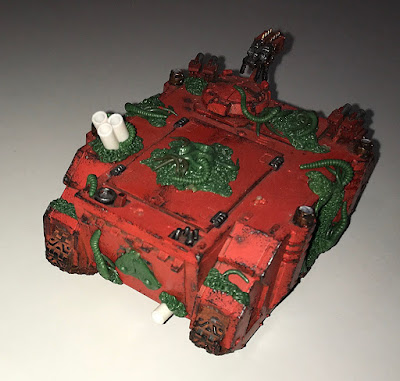 I was trying to make this match an older piece so that it fits with the army I painted probably 5-6 years ago, so it has no fancy chipping solution or grime solutions added as I started doing that all after painting this army.  The base colours were all done with an airbrush and went super fast.  I think it was less than 20 minutes to get the green and all the shading done, then the slow part started. 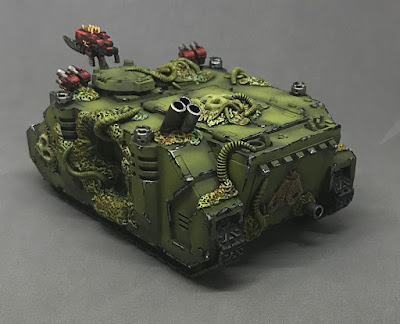 What took so long with the rhino was the fact that all of the pustule areas are just painted bone white and then layered with sepia, green, red, yellow, and blue washes in various areas to build up the sick looking colour shades.  Each layer had to sit and dry before the next, making it a slow process. 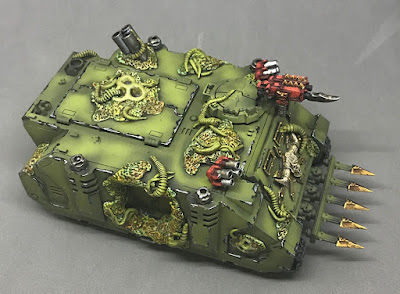 Next up are two Infinity figures from the Tohaa faction, affectionately known as the Artichoke heads, and I think you can see why.   These two are Sukeul Commandos, and I have been needing at least one of them for a long while. 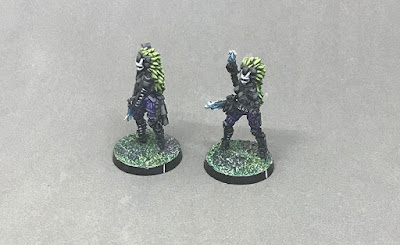 The one with the rifle is yielding a K1 rifle, which has a special type of ammo that can hurt anything 60% of the time.  No matter if it is a weak base trooper or a mighty TAG (Dreadnought) it is always a 60% chance to hurt them, which is damn strong since a normal rifle in the game has a less than 20% chance to hurt a TAG.  Since to many players have been fielding TAGs lately, I needed something to help out against them in my force. 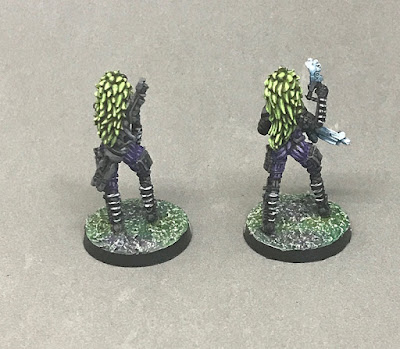 I took her to my game last night, and off course, basic rifle troops did more damage to the enemy TAG than she did..... figures, right?

Both the Rhino and the Tohaa were fun little starter pieces for the challenge, but now its onto some of the larger projects.
Posted by ByronM at 3:05 PM

Even better the second time round!