For my last game in Winnipeg, Byron treated me with an introductory game of Infinity. I have read a few battle reports on this blog and I was intrigued by the game system. Furthermore, I am myself a big fan of Japanese anime and the game is obviously inspired by shows like Bubblegum Crisis, Appleseed, Ghost in the Shell, or Blame. So reasons were many to try this game.

Byron set up a cool urban terrain with buildings he made. Games are usually played on a 4' x 4' area, but this one was a bit smaller. 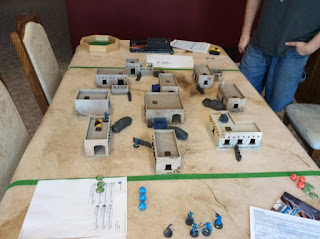 For the first basic scenario, we both had three basic troopers. I set up one of my guys on the roof providing cover fire to his buddies moving forward. Everything just felt right. 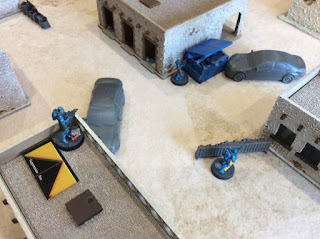 Here is a ground view of the battlefield. The game is only three turns, but there is always lots of action. While one player makes his units execute orders, the other player must be attentive for any opportunity for reaction fire. 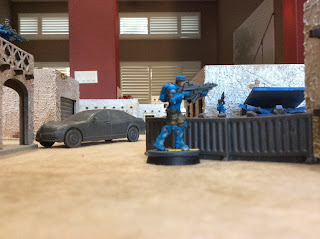 For the next scenario, I took command of a Panocean squad which included three regular trooper, one elite, one sniper, one close combat specialist and one commando. All these figurines were masterfully painted by Byron. 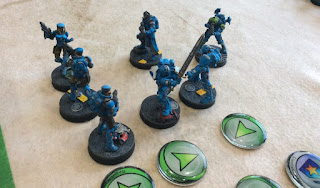 The objective was to claim the central building by being the last and only side standing on the roof. One security guard had to be "pacified" in the process. 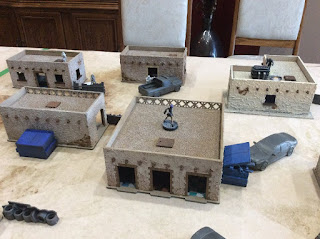 Panocean troopers looking over the buildings at the 500' enemy commander. 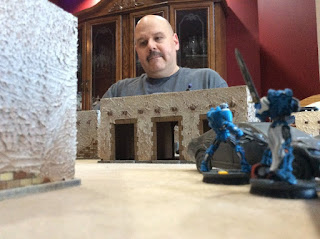 The game uses "real" line of sight. So the little guy in the red circle could shoot at my guy in the foreground. 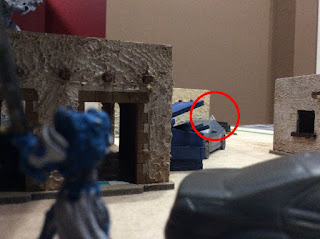 Troops supporting each other, getting ready to advance into the building. 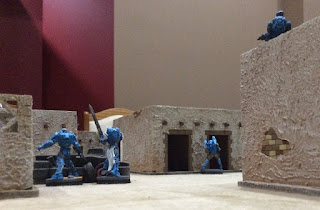 We played three games in about 3.5 hours, and each scenario was providing the right feeling about fighting on the street with fire weapons, as well as a good dose of anime cinematic. All-in-all, it was very fun and I am even considering collecting a faction. But for sure I will be looking forward to play Infinity again and come back to Winnipeg next year for more discoveries and fun.

Thanks again to Byron for a great opportunity to try a new game that I truly appreciated.

Infinity is a great game and the miniatures are so very nice. It is complex but the basics are easy enough. Just remember to buy the faction you like the look of the most, worry about the factions mechanics later but realise that they all have positive and negatives.

Byron and Dave V have done some eye-popping terrain and insanely amazing paint work for Infinity. Glad you got to enjoy it Sylvain!

Infinity is a great game that I've not had nearly enough time to get to the tabletop..... but you do realise how close "I may just get one faction" is to finding yourself with a starter set, 3 other factions and a cupboard full of terrain to be built, right? ;)

The biggest downside to the game is the difficulty in making it work for the "beer & pretzels" atmosphere of our Conscript Thursday night games. You can't really divide up, say, a 300 point force amongst 3 or 4 players.

That being said, my own "only one faction" has led to my painted and WIP Yu Jing, plus a pile of unpainted figures for Pan Oceania, Aleph, Tohaa, and Nomads.