I had an opportunity to try a game of "Check Your 6!" at DaveV's last Wednesday and in addition to DaveV, I had some great instructors to help me for my first flight: Rob, Bill and KevinH. The scenario was inspired by the very first encounter during the Second World War, in 1939, between 9 Luftwaffe bombers en route to sink some British Navy ships in the Firth of Forth in Scotland and 6 British early Spitfire I's. 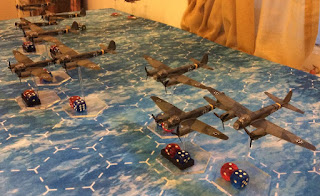 The 9 JU-88As in formation. As the Spitfires were getting closer, the bomber groups would get closer to each other and provide a dense defensive coverage. 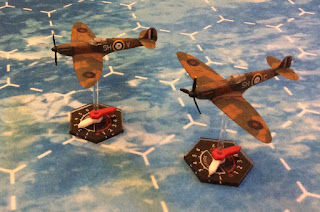 My two Spitfires, "V" and "C", with green pilots. I was told by the veterans to hold my fire until the last to save my ammo. 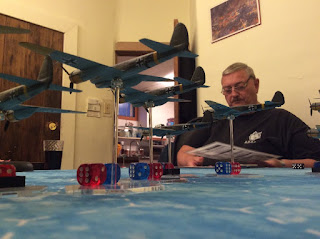 Pilot Bill wondering which pub the squadron pilots should go to for celebration after this engagement. The Spitfires engaged the bombers from their left flank. However, despite repeated strafing runs, the bombers were undamaged, and the Spitfires had to fly behind the enemy formation. 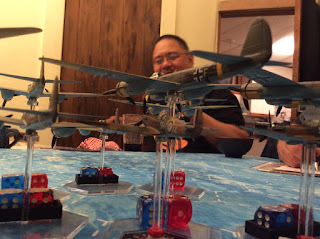 DaveV, satisfied with the outcome of the battle so far. 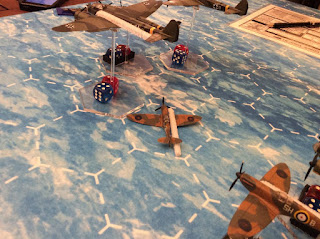 One Spitfire down! This is not good. Also, because I had green pilots, one of them ran out of ammo very quickly and had to rush back to the base. 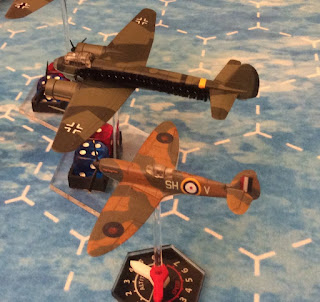 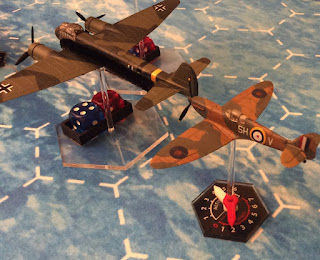 ... Now having moved behind, ready to shoot at point blank. Steady... Steady... 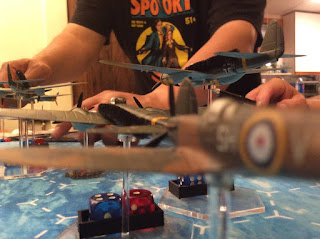 From the cockpit, the pilot of "V" can see the rest of the German formation. 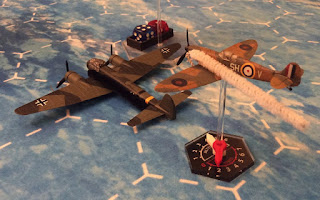 Daka! Daka! Daka! In the simultaneous exchange of machinegun fire, my plane was damaged but Spitfire "V" managed to shoot down a bomber. Yay! 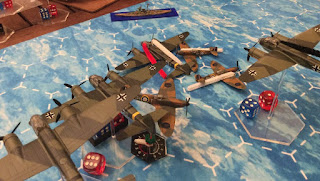 Meanwhile, as the bombers were approaching the British Navy, there was intense combat and two Spitfires as well as one bomber were shot down. At this point, DaveV declared a victory for the British, because enough bombers were damaged to make them abort the mission. It was a tough battle, but very enjoyable and fun.

I really like "Check Your 6!". The rules are intuitive yet they let you feel the subtle differences between the various aircrafts of WW2.

Email ThisBlogThis!Share to TwitterShare to FacebookShare to Pinterest
Labels: 1/144 Aircraft, Check Your 6, WW2

It was a pleasure to host. It was a really close game, decided on the last turn!

I have run this scenario several times now, both for the Conscripts and at game conventions. For the latter, it is a good learning scenario, with the players running the Spitfires and the organizers running the bombers.

Sylvain, best of luck introducing the system to your gaming group in Regina!