Every year I spend one month in Winnipeg and I always look forward to it because it gives me a chance to play a few games with the Conscripts. Last Thursday, KevinH, DaveV and ByronM were kind enough to come to my suite downtown to push some sail ships miniatures.

I offered a choice of two scenarii: Battle of Cape Ortegal -1805, or Battle of Hudson’s Bay - 1697.  The guests chose the latter, which was fitting given that it’s Canada’s 150th birthday. The battle happened on September 5. A British squadron’s primary mission was to replenish Fort Nelson and to get out of the Bay as it was already late in the season. The Hampshire was a military vessel and her mission was to escort the merchantmen. The Dering and the Hudson’s Bay were merchant vessels property of the Hudson’s Bay Company. It could be assumed that it was difficult to repair a ship in the Hudson Bay and, in September, there is not much time left to get out of the bay before the sea freezes. The British merchant ships probably wanted to avoid any damage to make sure they could get out of the Bay before being caught in the icepack. On the French side, the Pélican was under the command or Pierre Le Moyne d’Iberville, a warrior who led a very adventurous life. I encourage you to read his bio on wikipedia. A recreation of the battle was done by Radio-Canada (in French) back in 1967-68. I remember watching this show as a wee little kid and it might have sparked my interest for sail ships.

There is also a diorama displaying the four ships involved in the battle at the Royal Canadian Artillery Museum in Shilo. Unfortuntely, these cool ships can not be played with. 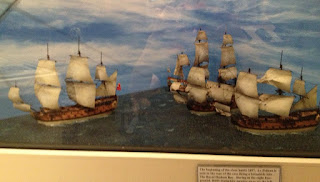 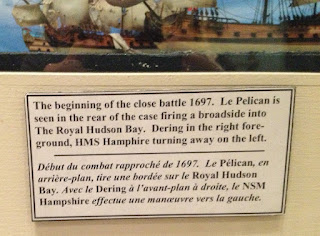 We had time to play the scenario twice and d’Iberville’s ship was sunk in both cases, proving that he was either an outstanding sailor or a lucky bastard. I would argue for the former. 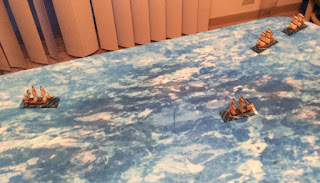 The Pélican, coming strong on the British squadron. "Men, we'll bag those Brits before our second coffee of the morning." Alas, it was not to be. All models are from GHQ.

Here is a shot at sea level. Everything seems calm and quiet, but not for long... 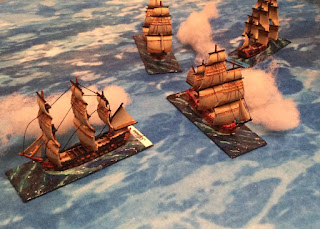 The Pélican, in the upper right corner, shot by all the British ships in the same turn. Aouch! 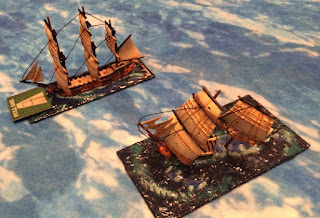 Blub! Blub! Blub! D'Iberville probably would not survive having to swim to the shore in freezing water, while avoiding polar bears. All in all, it was fun to watch.

In any case, it was great to visit with the Conscripts again and I'm grateful to them for taking an evening to share my passion for sail ships.

That looks awesome! I would not fancy the luck of anyone taking a splash in Hudson's Bay in September...

Thanks again for tha game, Sylvain! Mine was "short and sweet!" But Dave and Byron's wasn't too much longer! Cheers!

I enjoyed your photos and report. Thanks.

BTW,that sea surface looks appropriatley very cold. May I ask where you purchased it?
Cheers!

The sea mat is for Cigar Box Battle Store. Cheers!

It was a lot of fun, and thanks again for bringing your ships out.