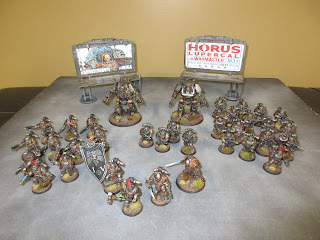 Continuing our group's collective Horus Heresy madness, I've now made a start on my second Legion project. Having amassed a reasonable force of IX Legion Blood Angels, I wanted to collect a Traitor legion, just for some contrast (not that Greg's Sons of Horus hordes need any reinforcement!)

So, which to pick... one of the things I enjoy about the Heresy background is its grittiness. It's really the antithesis of the "cartoon" GW aesthetic of the 1990s and hearkens back to the grunginess of John Blanche's work. And who are the grungiest of all the Traitor Legions? Well, that would have to be the siege masters of the IV Legion - the Iron Warriors.

I also have to admit that ease of painting was another major factor in my choice. And what could be easier than the blackened iron and hazard striping of the Iron Warriors? On with the show... 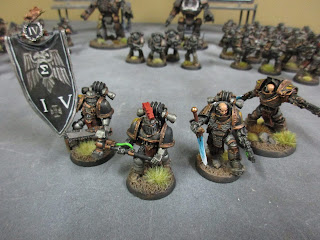 First up is a group of random character types - Praetor and standard bearer, Lochagos (Captain), and Ypolochagos (Lieutenant) in Cataphractii-pattern Terminator armour. 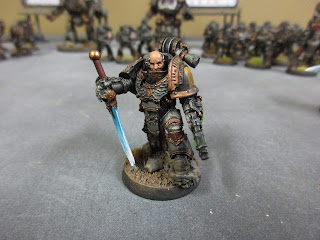 The Lochagos. Really quite a nice model. Unfortunately mine was miscast around the sword pommel so I had to add a new one with greenstuff. Turned out OK. 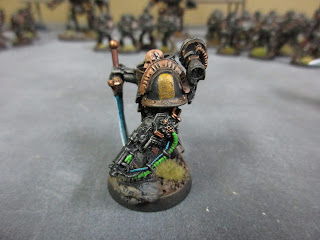 That firearm of his is mental eh!! 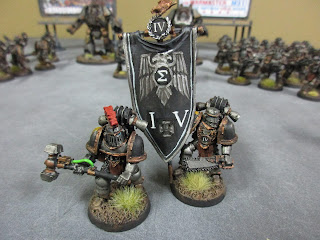 Praetor and Legion standard-bearer. The banner was the subject of some consternation. I'd originally thought of freehanding a boar, horse, or some other traditional Greek subject like you'd see on an amphora. However I ended up getting lazy and using a couple of decals from the excellent Forgeworld Iron Warriors sheet, and adding an "epsilon" and "IV" for some unit/Legion identity. 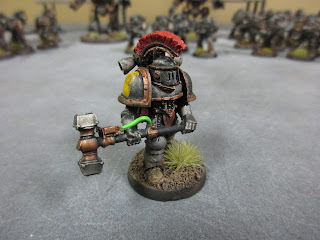 The Praetor is an excellent model. I've painted one for my Blood Drinkers also but to me the pose and weapon really suits the siege masters of the IV Legion. 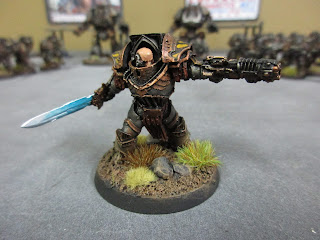 Cataphractii Terminator character. Not sure how he's gonna fit in but he's painted now. 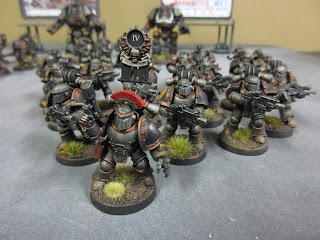 Of course, you can't have an army of all characters. You need some troops as well, and here's the first lot - a squad of 15 Space Marines in MKIII armour. 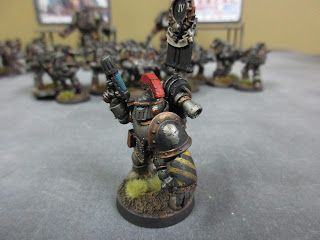 The IW decal sheet includes some nice skull insignia which I used on the left pauldron. The decals settled nicely around the compound curve with the aid of copious amounts of Micro-Sol. Hazard stripes freehanded on the power fist. 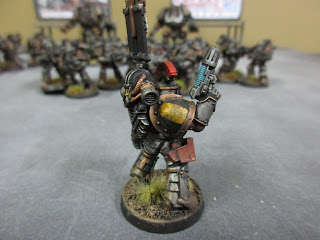 Single vertical yellow stripe on the right pauldron was shamelessly lifted from the excellent Iron warriors painted by the Apologist. 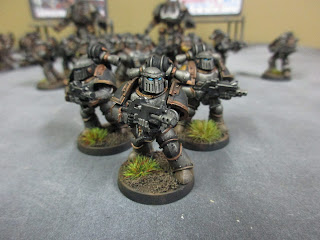 The majority of the squad are plastics from the Prospero box, which are excellent. A few of them are resin Forgeworld models, but fortunately they blend in very well with their later plastic counterparts. 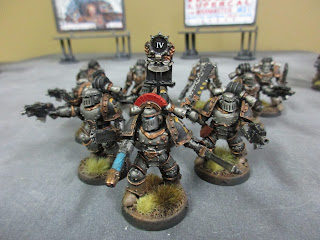 The assault squad are all resin. They're "OK" but some of the anatomy seemed a little ropey in the arm department, like the arms are a bit too long. Not really noticeable unless you're really looking for it though. 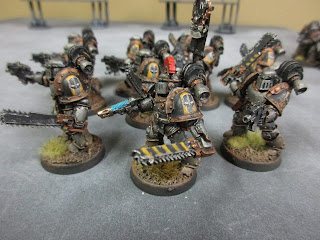 The squad has some further distinction in the form of yellow stripes on the left pauldron as well as the right, and the skull insignia in black. 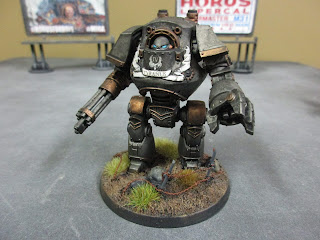 Contemptor Dreadnought... this is from the Calth box. I re-posed the legs slightly for a bit more dynamic pose. 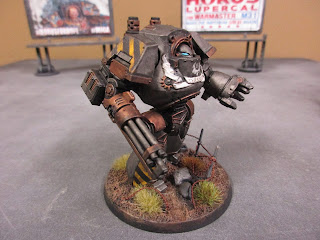 Legion-ified with some hazard striping as well. 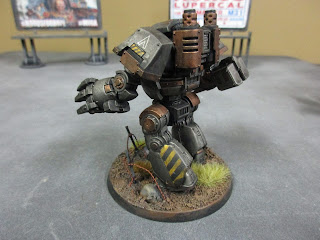 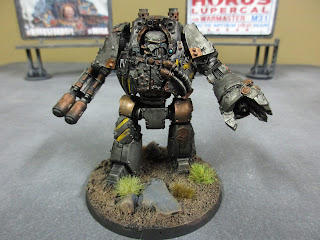 I also painted an Iron Warriors Contemptor, using a spare melta-arm from a Calth dreadnought. 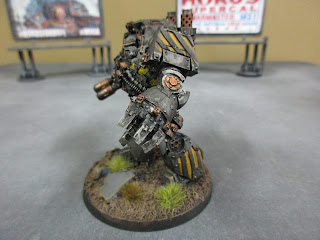 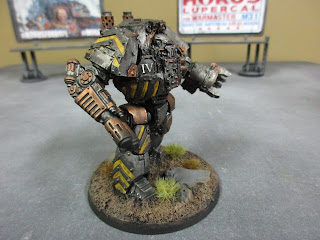 The plastic arm fit the resin dreadnought with only minor surgery required. 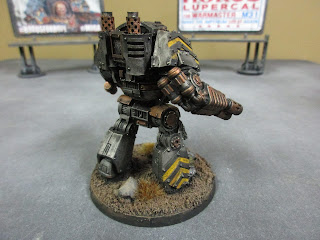 So that's the first bunch of IV Legion troops done! Still lots more to come, including Rhinos, a Medusa, a Typhon tank... plus Breachers and Iron Havocs, and more tactical marines... Siege Tyrant Terminators, a Storm Eagle... certainly more than enough to keep me going over the winter.

Oh, and just for posterity, here's the infantry paint formula, in order of application:

Cheers and remember, "Iron within! Iron without!"

These look terrific, Dallas! I really like the blackened armour and that banner is ace.

Damn they look good! Love the gritty look and of course the black & yellow stripes

Thanks guys! Now back to assembling more models for the painting desk :-)

Marvelous looking miniatures! I like the weathered gritty look on these.
Fantastic work on keeping the legion feel including the banner.