It's been a lot of work, but I have finally finished off my Warhammer 40k Tau army for this coming weekends Plains of War ITC event here in Winnipeg. For anyone not familiar with the ITC tournament scene, it is a hugely competitive tournament series that features obscene armies meant for one thing, flaying your opponent.  It is not for the faint of heart. You are allowed allies, detachments, formations, and more!  While ITC tries to limit the power level a bit, by fixing (or adjusting) the insanely broken rules that GW has been publishing for the last 10 years, the series is all about the win.

Honestly, not really my cup of tea any more, BUT the organizer of the local event is a great guy and a friend so I have to go, right?  It also doesn't hurt that because the event will be competitive it gave me a chance to paint a whole bunch of big Tau suits, which I normally wouldn't paint as they are too good to field in numbers in a friendly game (unless you don't want friends for long).  So, without further delay, here are some of the brand new units from what I call my Pacific Rim Tau List, since its a lot of giant robots. 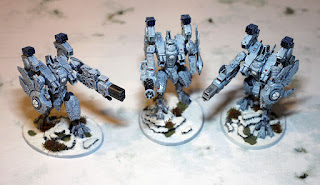 Lets start with the big boys, three Riptides, in a Riptide wing formation.  You get to take 3 of them, at the same price as normal, but they all get better, for FREE!  Reroll overheating, hit enemies easier if another Riptide has already fired at them, shot everything twice in a turn (once per game), and don't take up any slots in your force organization chart.  Yes, all that for free! 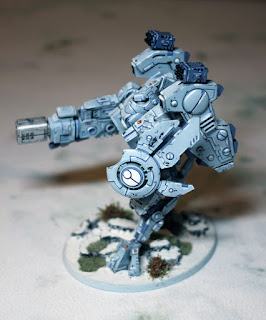 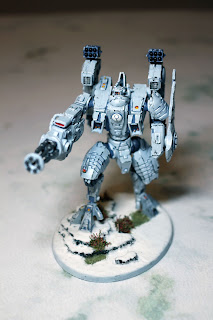 Paint wise, I had Tau units before, done in a winter camo scheme, and wanted to use some of them as well, but they were painted years ago and were not great.  So, I updated the scheme a bit by painting all the new ones (and going back over the old small suits and infantry) with chipping and edge highlighting.  Both done to a very high stark contrast in an attempt to look very anime'ish.  There are gradiants in the base coat (done by airbrush) but what I really wanted to pop was all the rough areas, which I think I made work.

While I like the overall look, and they pop (in my eyes at least) at table top level, they do look rough close up.  There is no subtly here, they will not win any painting awards, but they are not meant to, they are fast rough and dirty, so no offense taken if you don't like the style, several people I know don't like it already!

Next up is another formation for the army, the Advanced Stealth Cadre.

Once again, units at the same price as normal, but better!  The Ghostkeel (the big suit in the middle) can fire at +1 ballistic every turn, ignore cover, and target the rear Armour of any vehicle it shoots at, plus either (or both) of the units of small stealth suits get that bonus as well if they are within 6" of the Ghostkeel. For FREE....  are you starting to see my issue with recent GW rules? 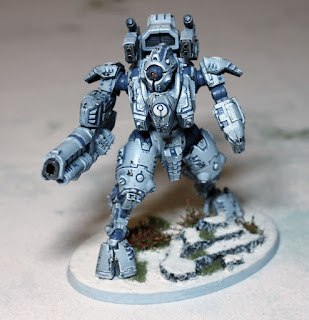 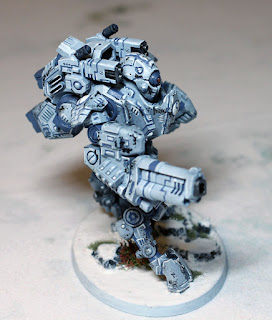 Oh, did I mention that with the drones that come with the Ghostkeel give it a 2+ cover save in the open due to doubling its stealth and shrouded saves?

Last of the new units painted for the tournament is my commander and her unit, although to be fair half of the unit is from 10 years ago just being retouched up with chips, edge highlighting, and new bases.

The unit is made up of Commander Shadowsun leading a unit of Crisis suits as part of a Farsight enclave, which makes them count as a troop choice instead of an elite choice.  By having Shadowsun lead the unit, she grants them stealth and shrouded (so a 4+ cover save in the open!) as well as a 3d6" jump after firing every turn (instead of the normal 2d6" jump). 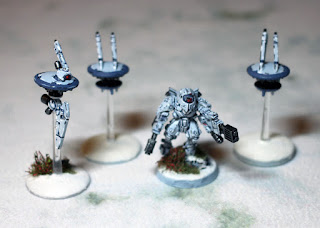 Shadowsun herself comes with 2 shield drones that give 4+ inv saves and a drone that lets a single unit within 12" reroll all 1's that turn.  On top of that she has 2 melta guns that she can fire at different targets! 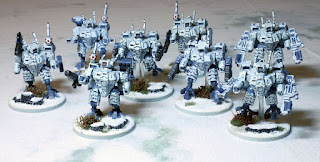 The unit is made up of 8 Crisis Suits, 3 with plasma guns and missile launchers, 2 with dual cyclic ion blasters (so 8 str7 shots each), 2 with dual melta guns, and a unit leader than lets the whole unit ignore cover, reroll misses, and chose to either reroll to wound or reroll armour penetration rolls.  Oh, and remember, they count as troops!


So there you have it, all the new units I painted up over the last few weeks for the army.  The army is 1850 points and really that makes up most of it!  The only other units in the army are a small 8 man unit of Firewarriors, a unit of Kroot (that Sean McWatt painted for me YEARS ago and that I just touched up a bit), and a few Broadside Missile suits.

As nasty as all the above looks, I expect to not break a 50/50 record....  Mainly due to my inability to focus on and remember 40k rules as they just piss me off, and due to many of the armies that I have seen that are going, making this one look about as tough as a Powder Puff Girl.  Sigh....

At least I had a lot of fun painting them!!!

After your description of their (outrageous) capabilities to think that this would be considered a mean-average force makes me cringe.

Nonetheless, I hope you have fun at your Whine & Cheeze Party!

Nice army Byron! They do sound pretty... "optimized." I especially like the spiff on the model that gets to target rear armour! Although I do hope that you're better at remembering all the special rules than I would be...

I made cheat sheets, with all the stats, weapons, and special rules for the army so that I don't forget. The issue being that since this is modern 40k, my crib notes cheat sheet is 4 PAGES of rules!!! I wish the game allowed tactics instead of just adding special rules every other week! My bet is, even with the cheat sheet, I will still forget to use 1/2 the rules all weekend....

Great looking army Byron! It's surreal to have such a disconnect between cool miniatures and rules plagued with exceptions and constant changes. Years ago, I became a total fan of Epic because of the simplicity of the rules.

That ITC event sounds stomach-churning...I like our group approach where we ignore a bunch of rules and simply forget about the others :)

That is staggeringly good work, love the colour scheme and what a final shot!

Great work on the army, particularly the ghostkeel, which is just a great looking suit.

But man, all that rules talk reminds me why I am not really that interested in contemporary 40k. Love the figures and the universe, but the rules...

Great looking army, Byron. I really like the theme, down to the bases.

I remember fighting against this army with a "gentlemen's" Eldar list. I had fun, but it went about as well as you might expect. Should have led with the Wraithguard in a Wave Serpent going Flat Out first turn. Eh, shoulda, woulda, coulda.

Best of luck at the tournament!

Well, I tried to design a mean power army, and was told by pretty much everyone I played that I had brought a fluffy weak Tau army! I ended up 1-3-1 in 36th out of 40! The one saving grace was I got 4th out of 40 on painting. I felt bad taking this army and it was one of the weakest there.... GW continues to prove that they can write cool fluff, make cool models, and has no idea how to make fun, balanced, competitive, tactical, or strategic rules.

Pretty much my problem. Must admit, I'm getting less and less aghast at the chance of GW turning 40k into AoS as its simple and is a lot of fun (now they've removed the ridiculous rules)