Ludus Gladiatorius - Back to the Arena!

A couple of Thursdays ago I brought out Ludus Gladiatorius (Eng. trans. "Gladiatorial School") for another evening simulating hand to hand combat in front of the Roman crowds. Dallas, on a recent rip to Imperial Hobbies in Vancouver, had kindly picked up for me a felt arena map from Hotz Mats, which we used to good effect.

I have both of the sets that were originally available from EM-4.  This is a quick-play gladiator combat game with pre-painted metal 28mm gladiators and special combat dice. Lots of cool play aids are available for download on the Yahoo Group.

They key feature of the game is that each character has a certain number of special actions that. once used, are no longer available. So, the tactics are based upon movement, and using your special actions wisely. Each gladiator has a rated movement, in hexes, but may get an extra hex of movement, determined randomly;y. So, you never quite know if  someone else can reach you or not!

The players chose their gladiators by die roll:

We had a battle royale with everyone starting just outside movement range of one another. Bill's Vescen was playing it cagey, so I ran Leonius across the arena at him. 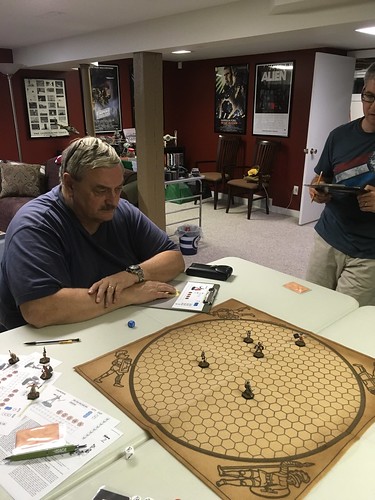 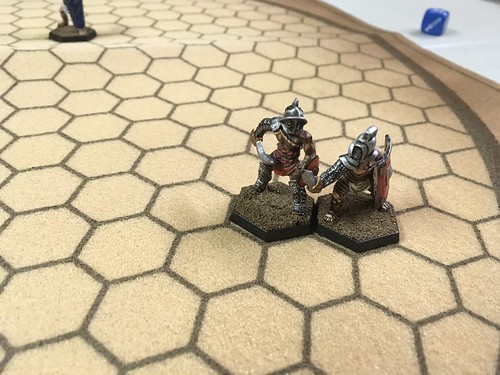 In retrospect, that was not the greatest of ideas, since Leonius was the first to fall. However, the crowd must have liked what they saw, because he was spared! (There is a special purple die, with both "thumbs up" and "thumbs down" faces.) 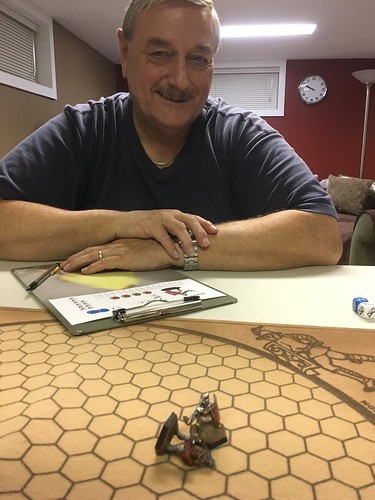 [Note: Historically, a gladiator who acknowledged defeat could request the munerarius ("editor", or giver of the games) to stop the fight and send him alive (missus) from the arena. The editor took the crowd's response into consideration in deciding whether to let the loser live or order the victor to kill him.]

The fight devolved into a couple of paired combats:  Vescen vs. Marcus Attilius, and Caladus vs. the mighty Thrax. 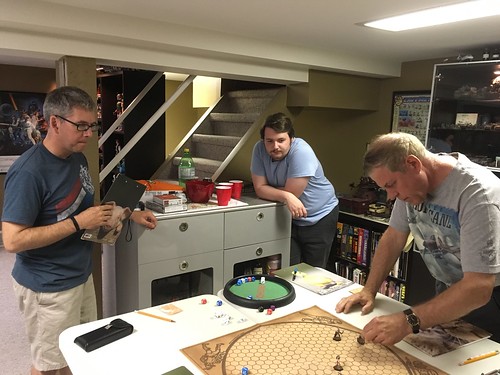 Calladus was the next to fall, but also was granted missus. 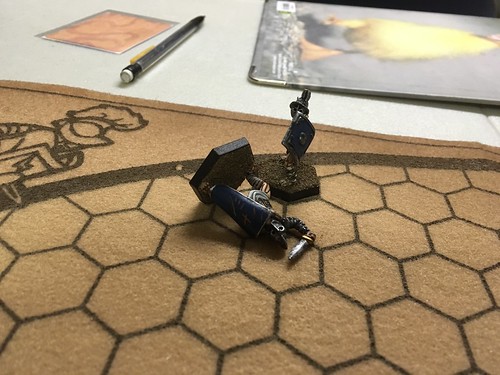 By this point, Marcus Attilus had only one hit point left, so he was trying basically to stay alive, moving back out of reach when he could. However, seeing Thrax standing alone, he and Vescens ganged up on the heavily equipped gladiator. below, Dallas swings for the bleachers... 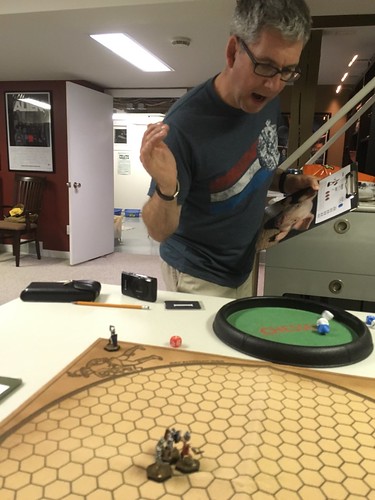 ...to no avail, as Thrax went down. Yet again, he had performed well, as Thrax was granted missus. The time was called, and Marcus Attilus and Vescens shared accolades as co-winners of the contest.

Below, Frederick looks on in relief. Both Marcus and Vescens had only a couple of hit points left between them. 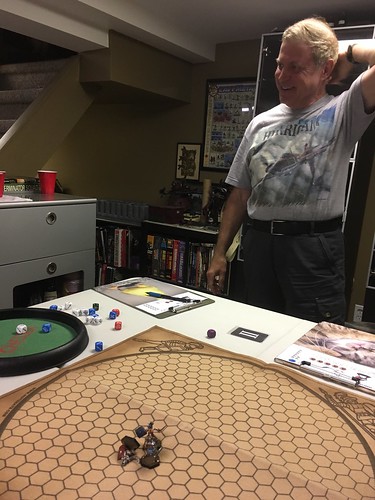 Ludus Gladiatorius is a fast-playing, beer & pretzels kind of game, well suited to our Thursday night style of play. For more detailed combat rules, there are other games like Avalon Hill's Gladiator, which better simulate the cut and thrust of personal combat, and attacking or defending different parts of the body.

I look forward to trying out the mat with Brian's model of The Collosseum.
Posted by DaveV at 11:59 AM

Great game guys! It's been years, but I'm still bitter about Thrax...

Great report Dave. I have to correct the record though, some anti-Thrax propaganda snuck in there... Thrax was actually alive at the end of the match. I think he and Frederick's gladiator were the ones standing when time was called. THE MIGHTY THRAX!!!! ARE YOU NOT ENTERTAINED????