Earlier this Spring, I decided to start a 30K/Horus Heresy project to join in the big game planned for later this summer. Not that 2,000 points of Space Marines is gonna make a huge difference in a game with multiple Reaver Titans, Knight Titans, and super-heavy tanks, but there has to be some crunchies around to get plastered by "D" weapons, right? ;-)

The first thing I had to do was settle on a Legion. It had to be Loyalist - mainly to offset the massive Traitor forces that Conscripts Greg and Byron have been amassing, and to better fit in with my Legio Metalica Reaver Titan and Loyalist Imperial Knight. And it had to be a colour scheme that I hadn't done before on an "army" scale. I've discussed this more in depth in my post on the test model, but suffice to say I settled on the Blood Angels Legion (the IXth) for a colour scheme, and focused on a particular military organization within the Legion - the Blood Drinkers (later to become a successor Chapter, of course).

Anyway, I'd been accumulating more Rogue Trader-era metal Space Marines (mostly in MKVI armour that came into use toward the end of the Heresy) for an undetermined project, and it seemed like a good idea to reassign those assets to this one. I'd also picked up a lot of RTB-01 plastic "beakies" (also MKVI armour) in various states of repair, and those had their paint stripped ready for reassembly and painting.

I also picked up the MKII "Command Set" from Forgeworld. Fortunately, these new resin models scale pretty well with the old MKII metal Marines that I have in the collection. For example, in the first picture above, the middle two models are Forgeworld, and the two on the ends are old metal MKII bodies with Forgeworld resin MKII shoulderpads, backpacks, and Phobos pattern bolters. Games Workshop itself produced "Armour Variant" models in MKI-V armours, typically with metal bodies and separate arms, pads, weapons and backpacks. In fact, you can still buy Finecast versions of these models here, although they're usually readily available in metal form on eBay.

I wanted to include a Rapier in the list just for fun. My preference was to use an old metal model to better suit the character of the list - plus I already had some Marines in the collection that would serve well as crew. So a model was obtained from an eBay seller, painted and weathered. It'll serve as the "laser destroyer" Rapier variant.

The heavy weapons squad is identically armed with Conversion Beamers. I like using these as the weapons because they can reasonably proxy for just about any other heavy weapon, from lascannons to plasma cannons, except maybe missile launchers. The Marines and weapons are all metal from the RT era, of course. 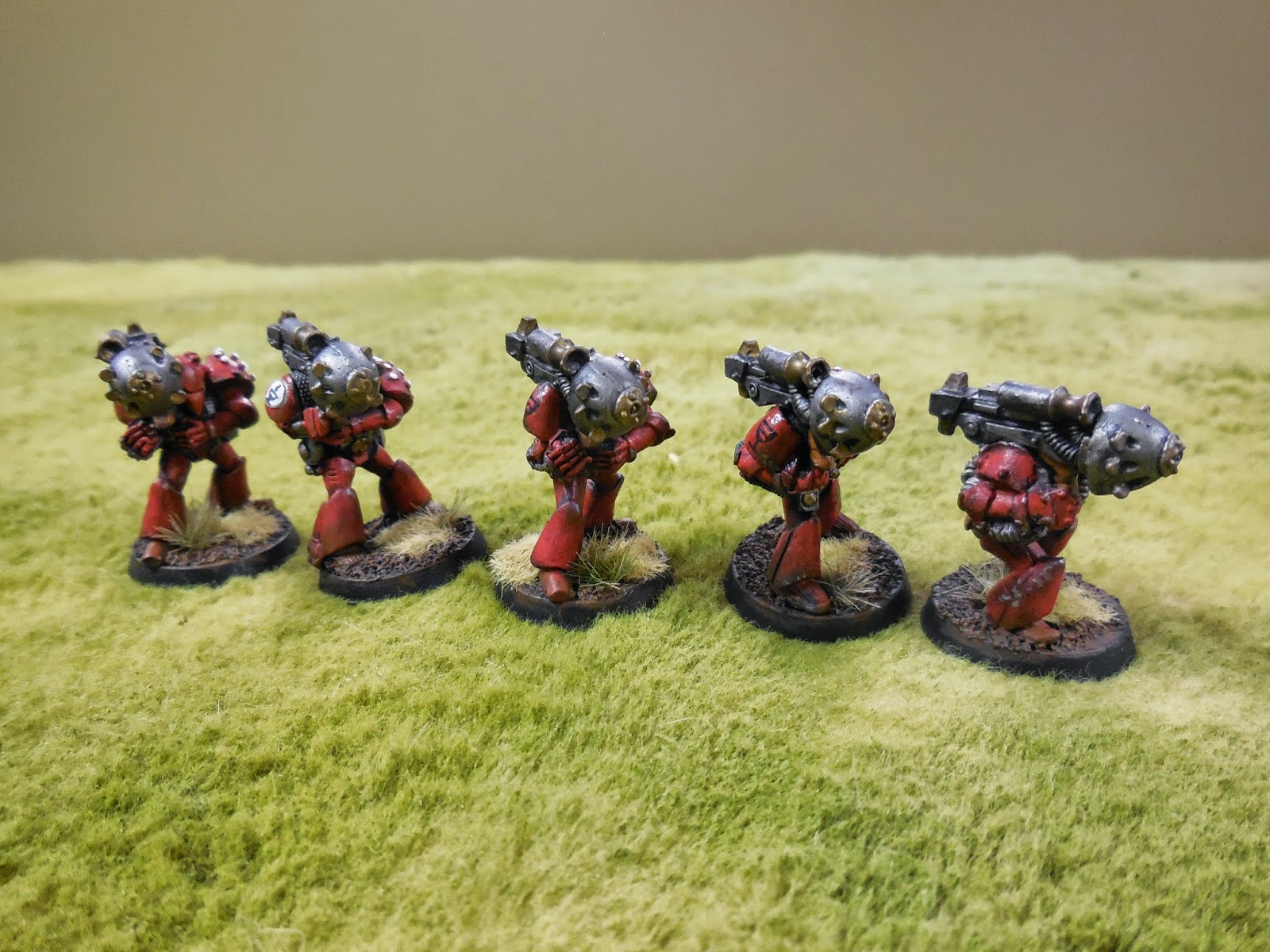 The 10-man Veteran squad are equipped exclusively with early-mark armour variants. They're also all either one-piece metal figures or metal bodies with resin or plastic arms. They also have backpacks appropriate to the armour type, and figures with separate weapons have Phobos bolters. I obtained the bolters and backpacks as pieces from eBay sellers who specialize in that.


The Tactical Squads are RT metal models with a few RTB-01 plastics mixed in. I've converted a few of the metal models for variety and to suit my aesthetic. 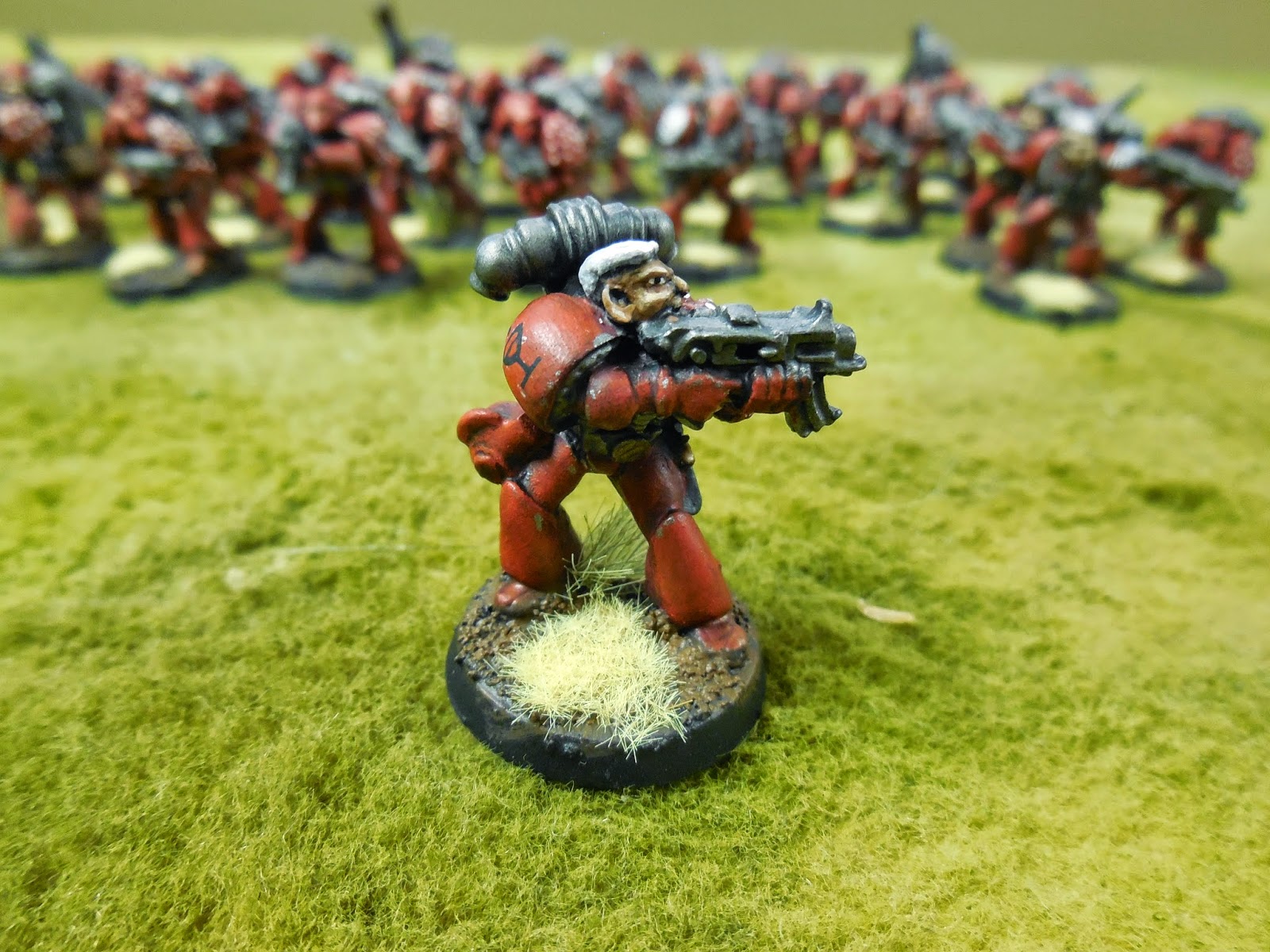 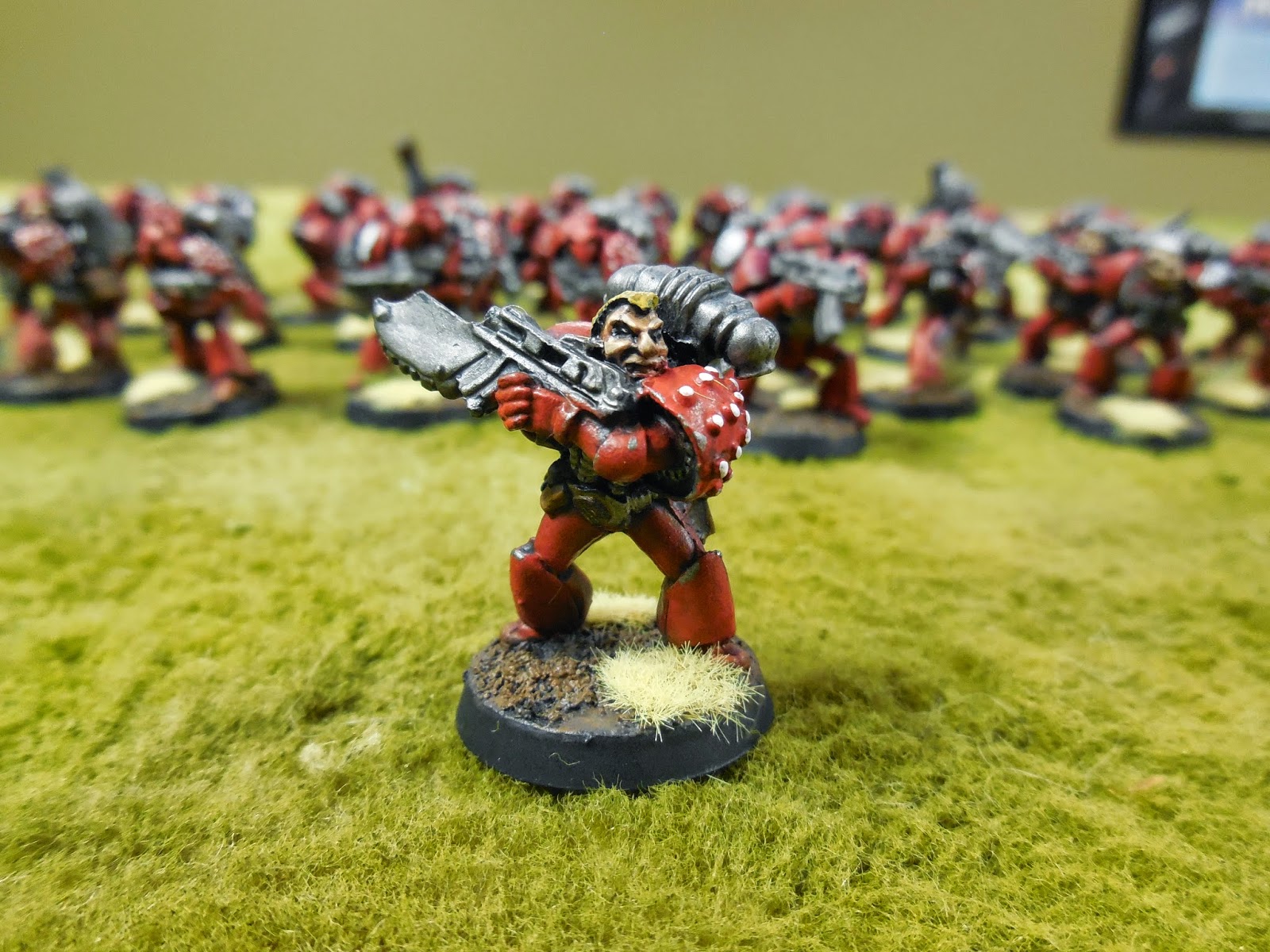 Well, that's the Blood Drinkers as they stand right now. I also have a metal Terminator Squad in Blood Angels livery I'd painted for Space Hulk a few years ago, that can easily slot into this force. Future plans include a 10-man assault squad (just waiting on jump packs from MaxMini), a metal Landspeeder currently in primer, two Rhinos (Chapterhouse conversion bits on the way), a Land Raider (ditto), aaaaand... a massive Spartan Assault Tank now on my painting desk awaiting assembly. Heresy escalation is a thing, you know ;-)

Anyway, it's been great fun accumulating and painting these models and I'm looking forward to adding the vehicles. I hope you enjoyed reading about the army - look for them in a battle report very soon!
Posted by Dallas at 10:49 AM

Really nice! Surpising how the old and new models fit together!

Excellent work Dallas! They looked great on the table the other night, and this will get even better once we finally get some vehicles in action.

FYI - our forces are not "traitors", they prefer to be known as "early adopters" :)

Very nice! I've come into a bunch of Rogue Trader models recently, especially the one piece models and will also be adding them to my Iron Hands army.