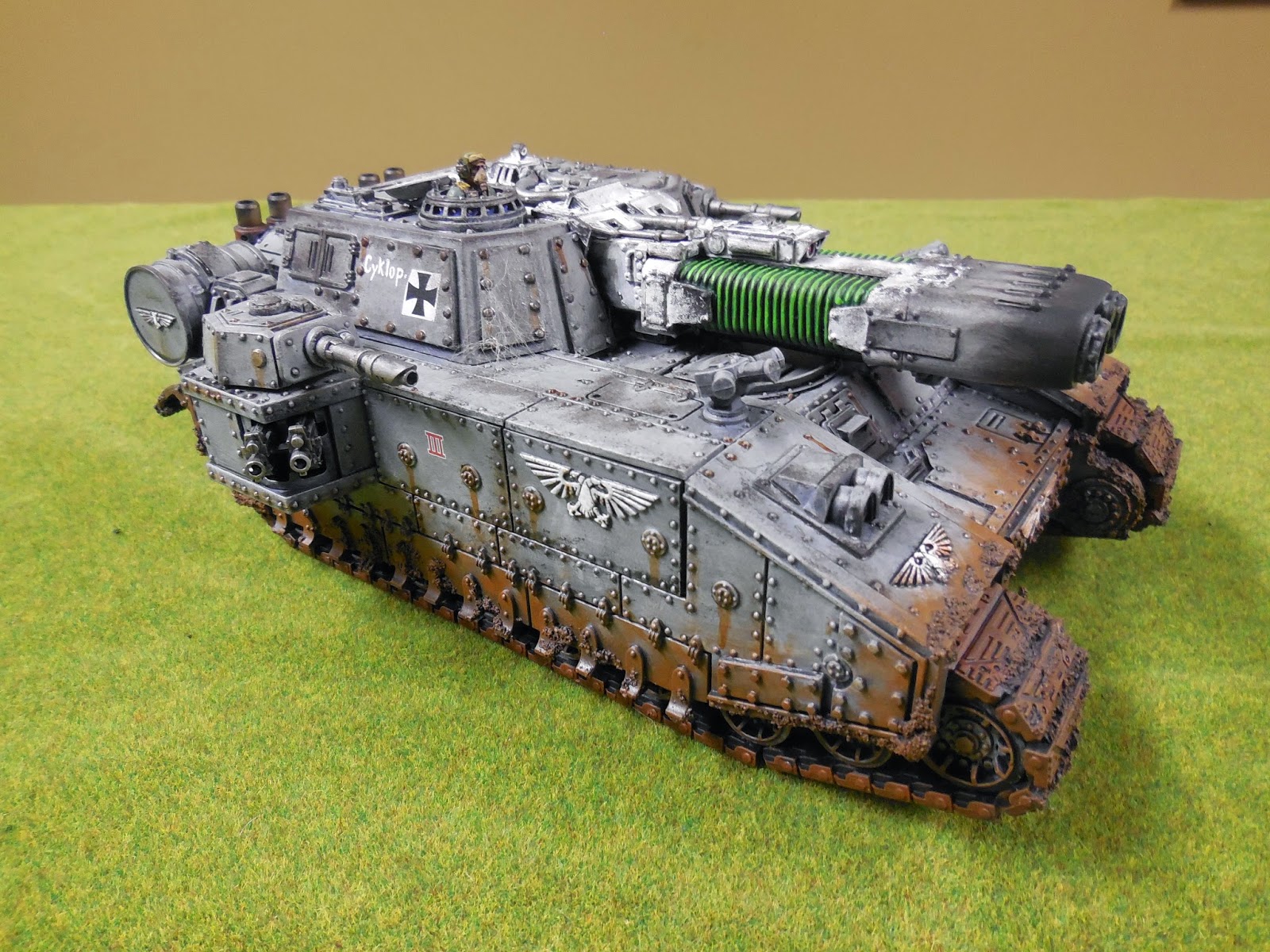 We all love the resin crack produced by our friends at Forge World, but sometimes you can luck into some of that resin-y goodness without taking out a second mortgage. So it happened last summer when I found a local chap selling this Arkurian Stormblade model on the local kijiji buy-and-sell site. The model was mostly assembled and painting started but it needed a bit of work. We arrived at a price that was about half of a new one and the deal was closed. I got it home, fixed what was broken, primed it black, and it sat on my shelf for a good 8 months :-) 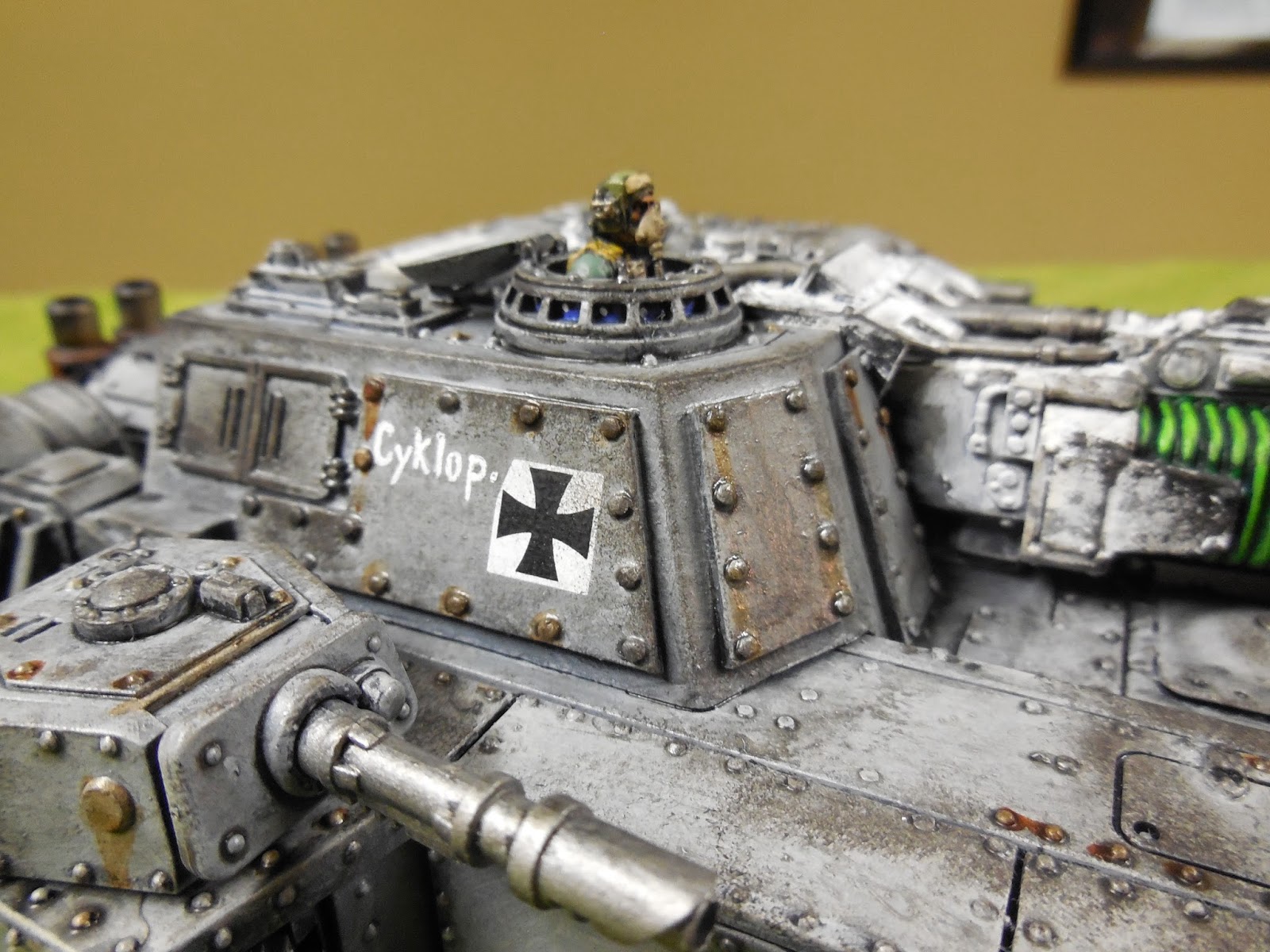 Being that this is our long weekend here I resolved to finish the model up. I basecoated it dark grey, then brushed it up with a lighter grey, painting the lascannon turret weapons and sponson heavy bolters with Leadbelcher. I named it "Cyklop" after an A7V tank in German service in WWI. (My Shadowsword is named "Wotan" for the same reason) 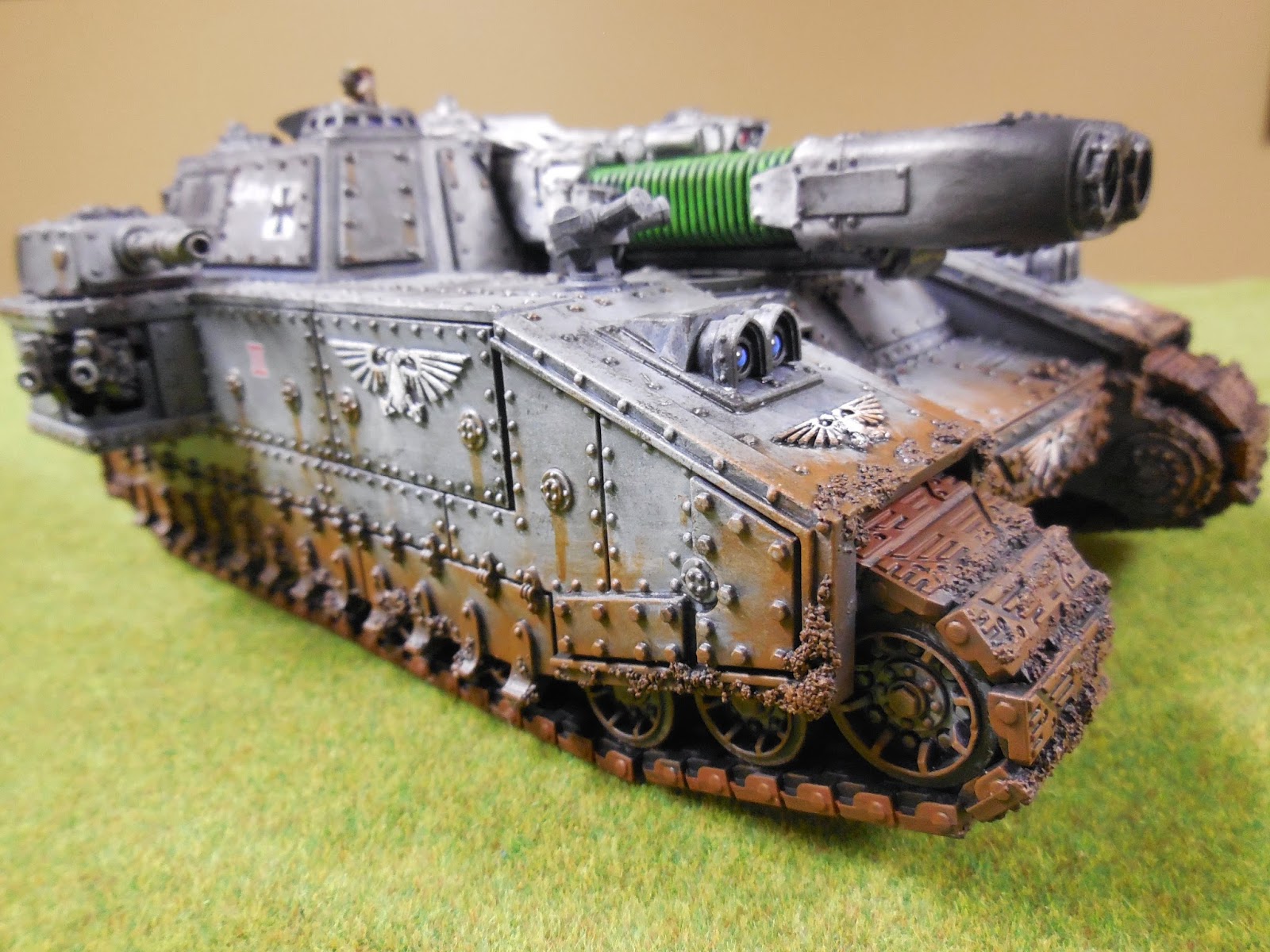 I'd also mudded up the tracks with artist's gel medium basing stuff to match the muddied look of my Shadowsword. Mud was brushed up with Dryad Bark and Mournfang Brown. 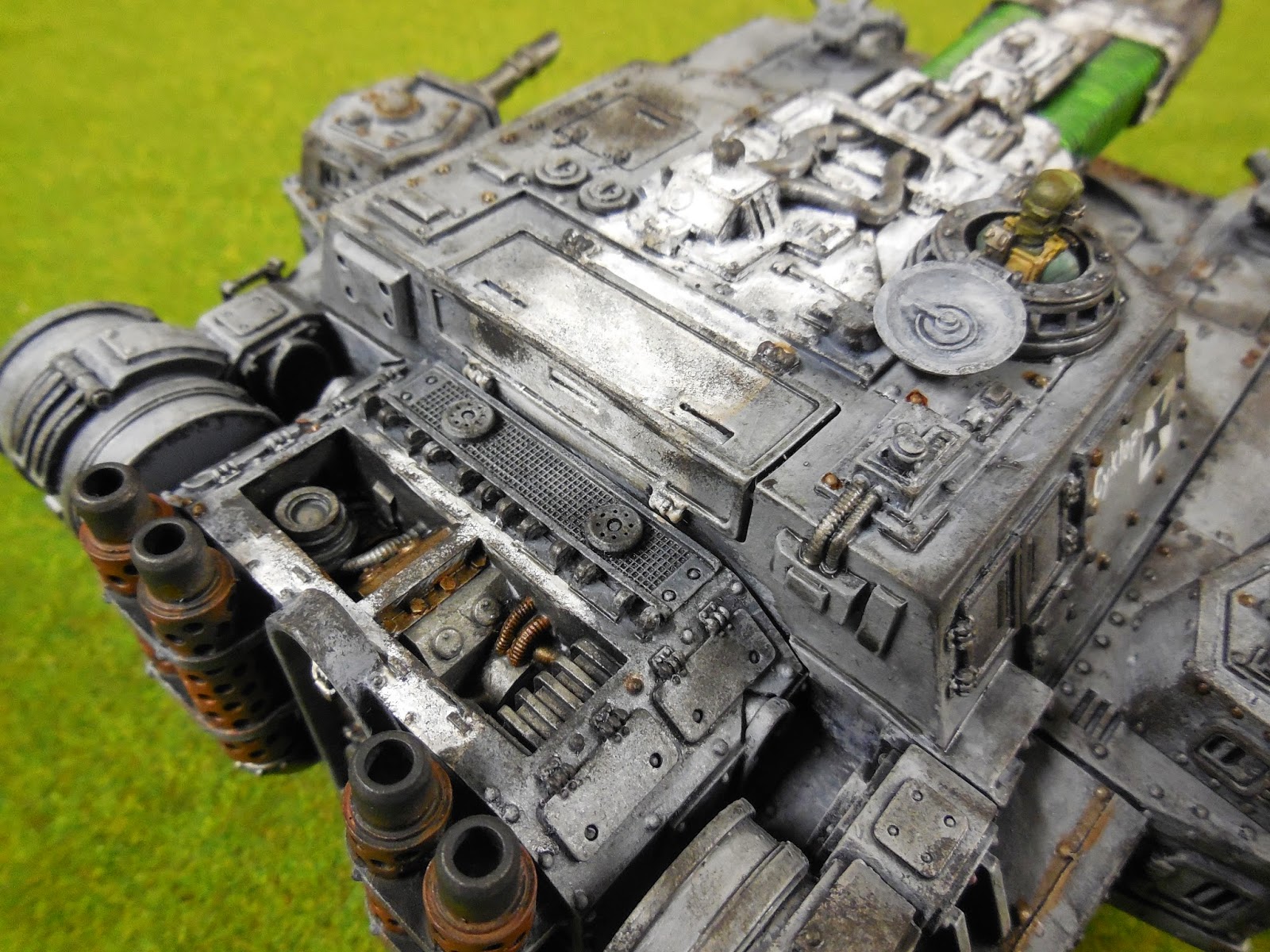 Just for some visual interest and to break up the expanse of grey, I decided to paint in a white aerial recognition stripe for this Titan-killer. Note the exposed powerplant. 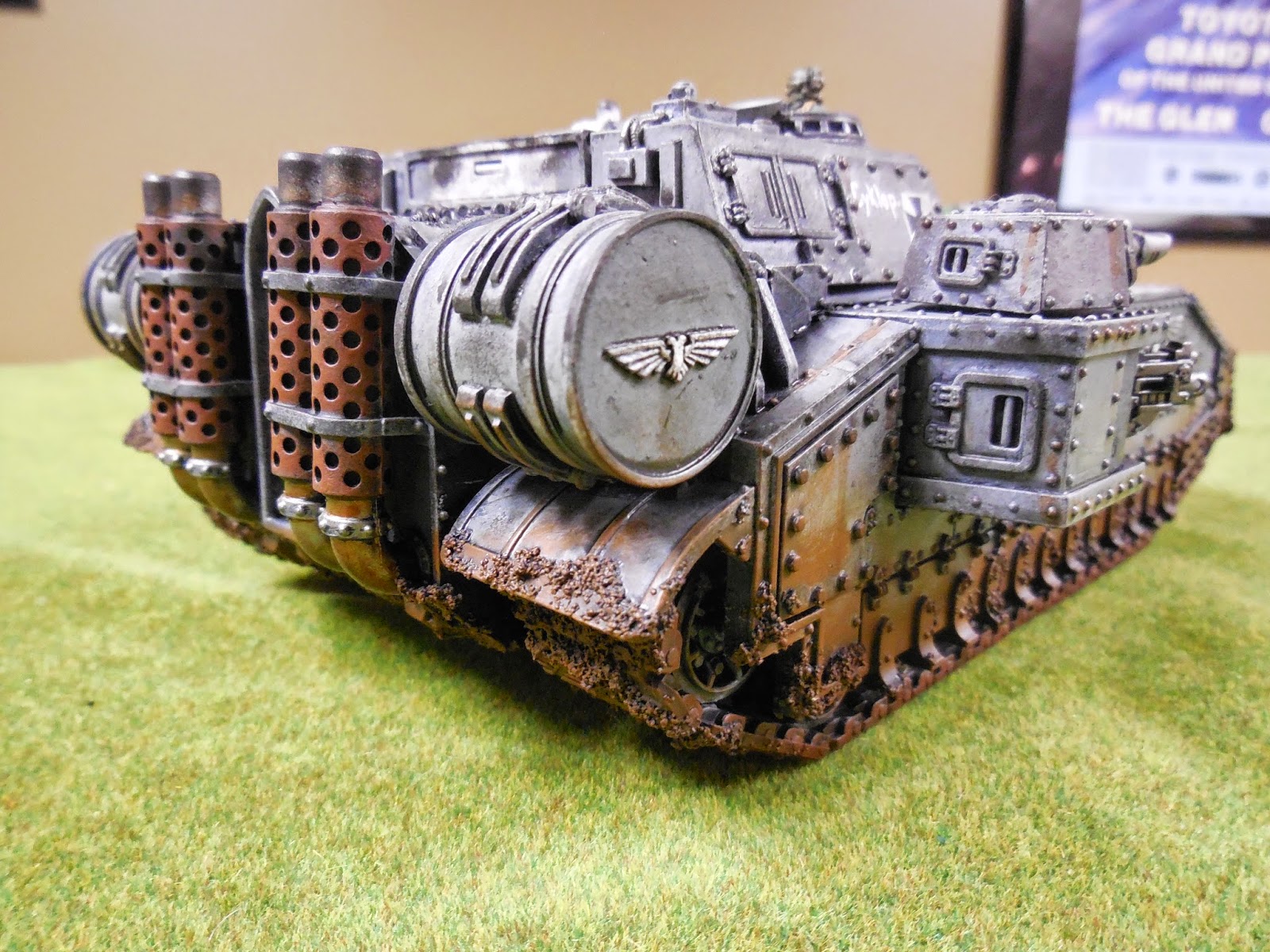 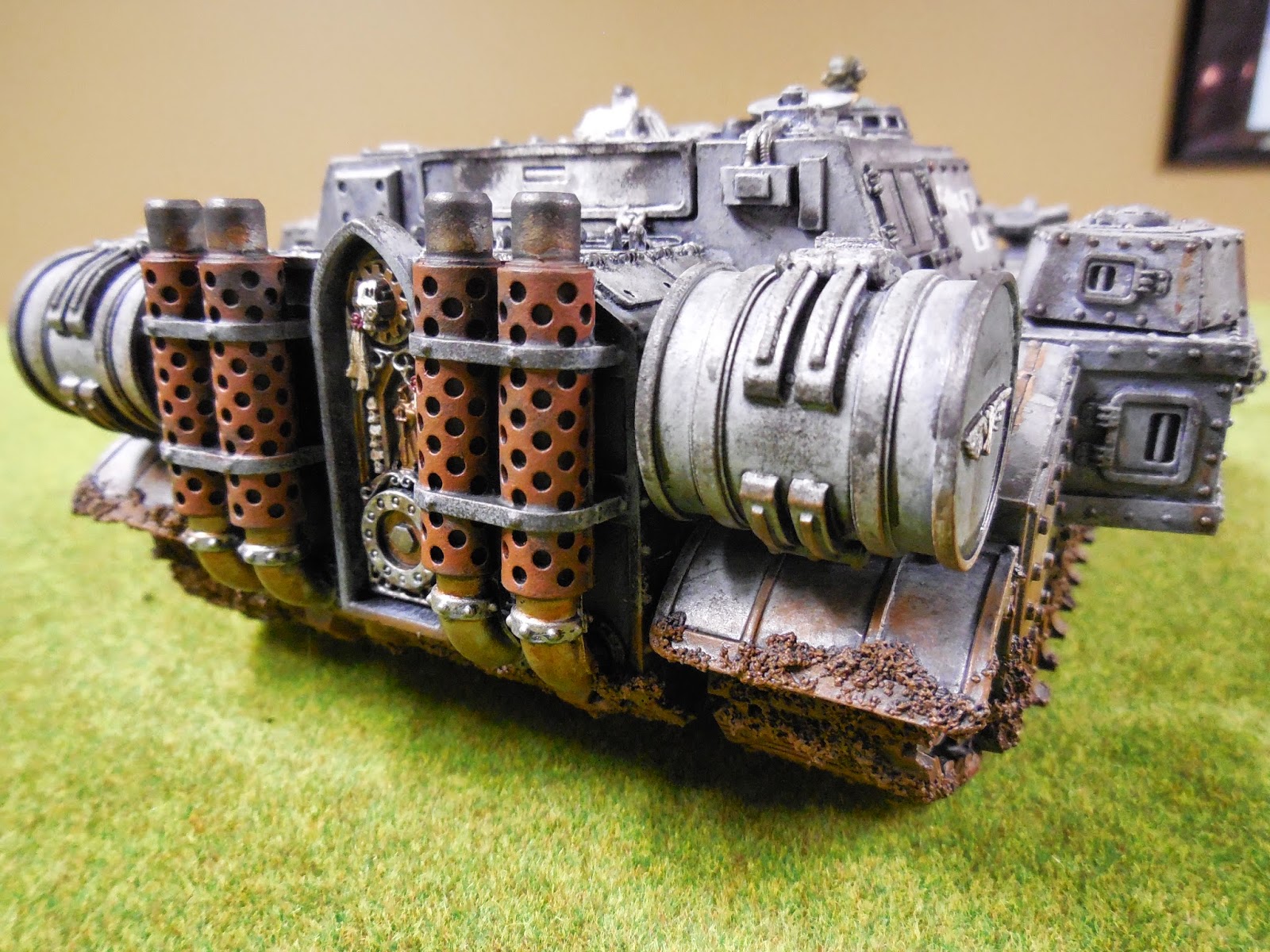 The auto-shrine is visible in this shot as well. 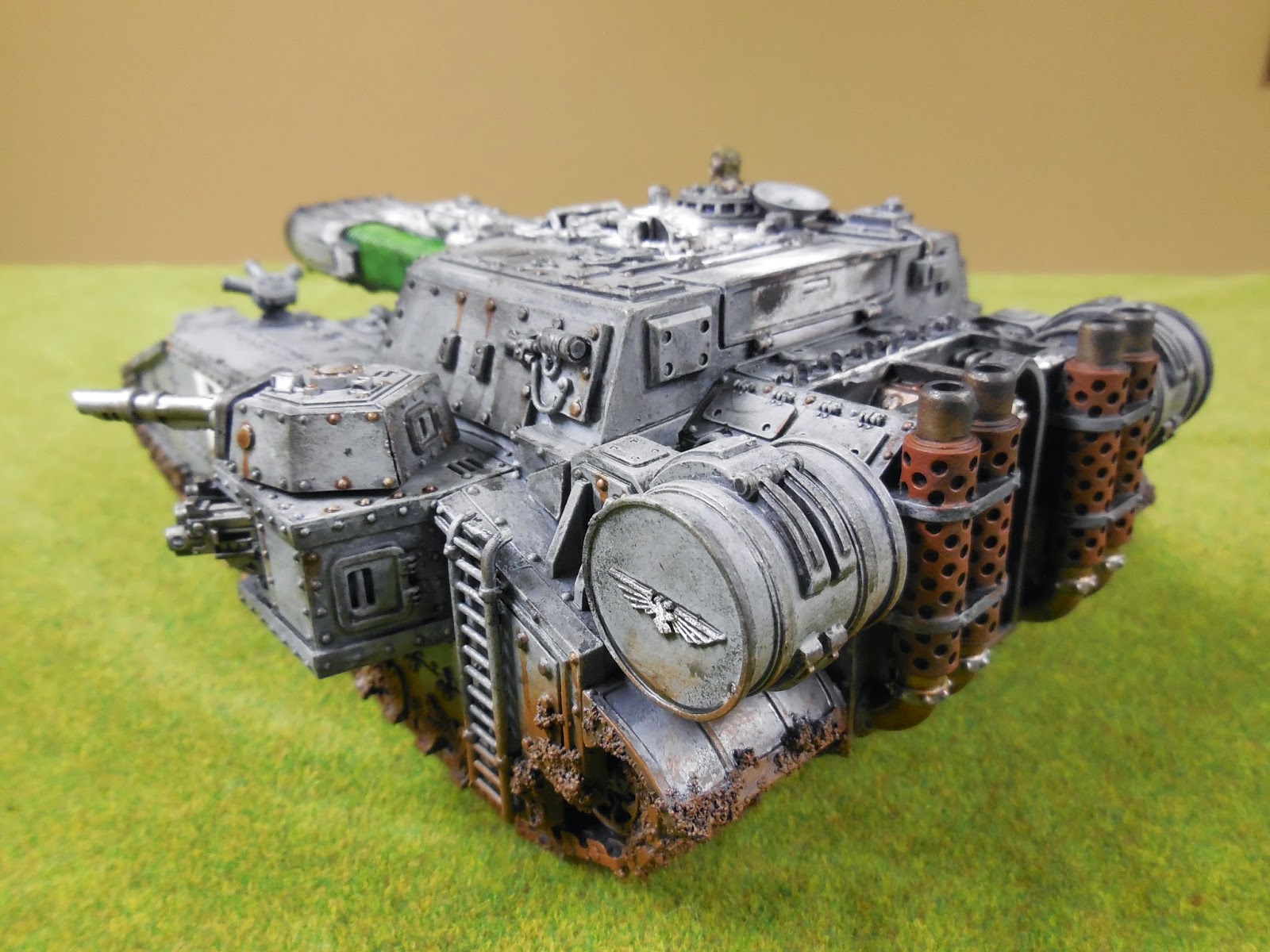 I really like the massive... presence of the GW super-heavies. 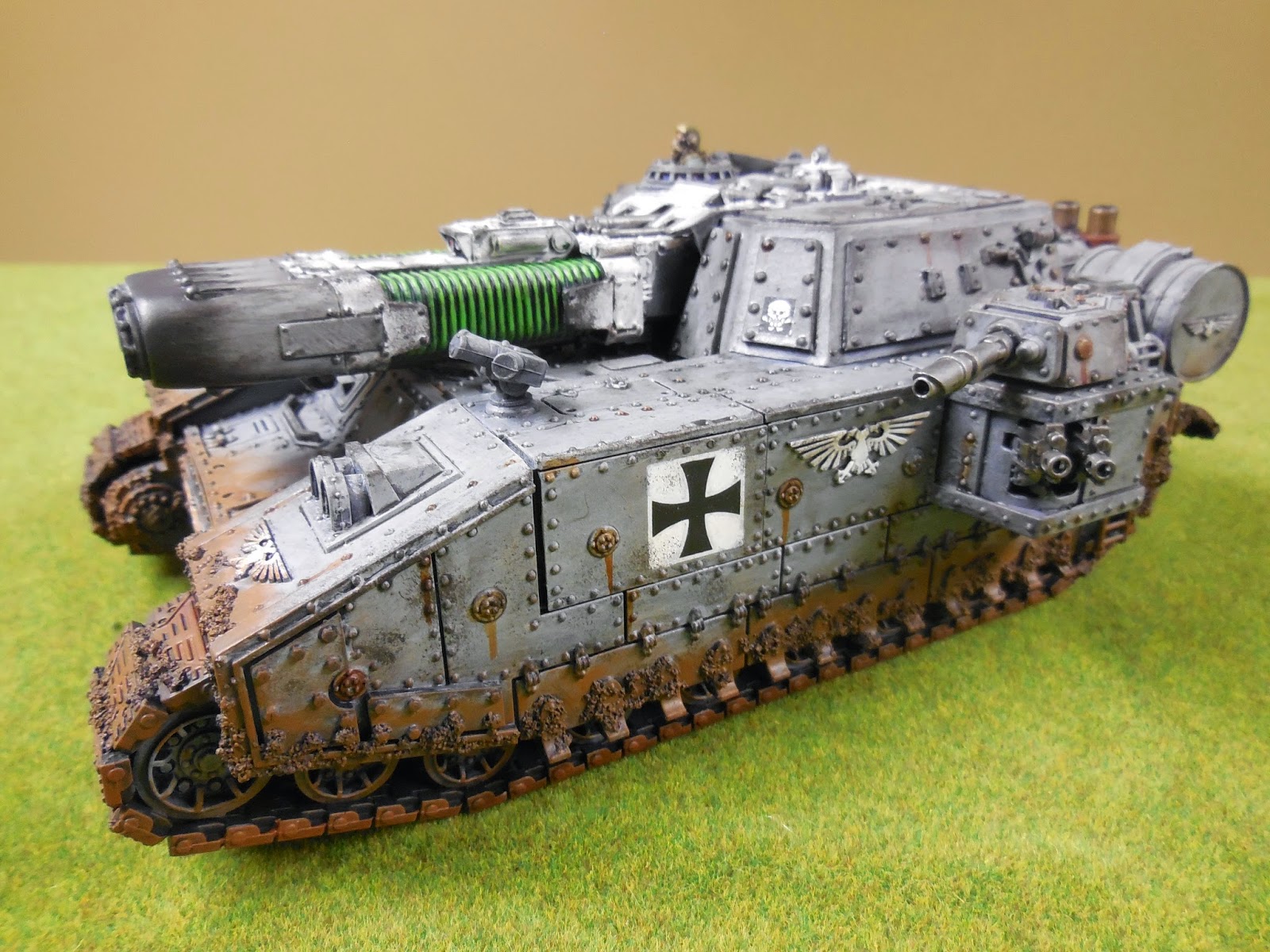 Cross tactical marking also matches the Shadowsword. I used a decal from a 1/72 WWI airplane kit and filled in the white background with paint. Death's head is from the Tamiya 1/48 StuG III kit. 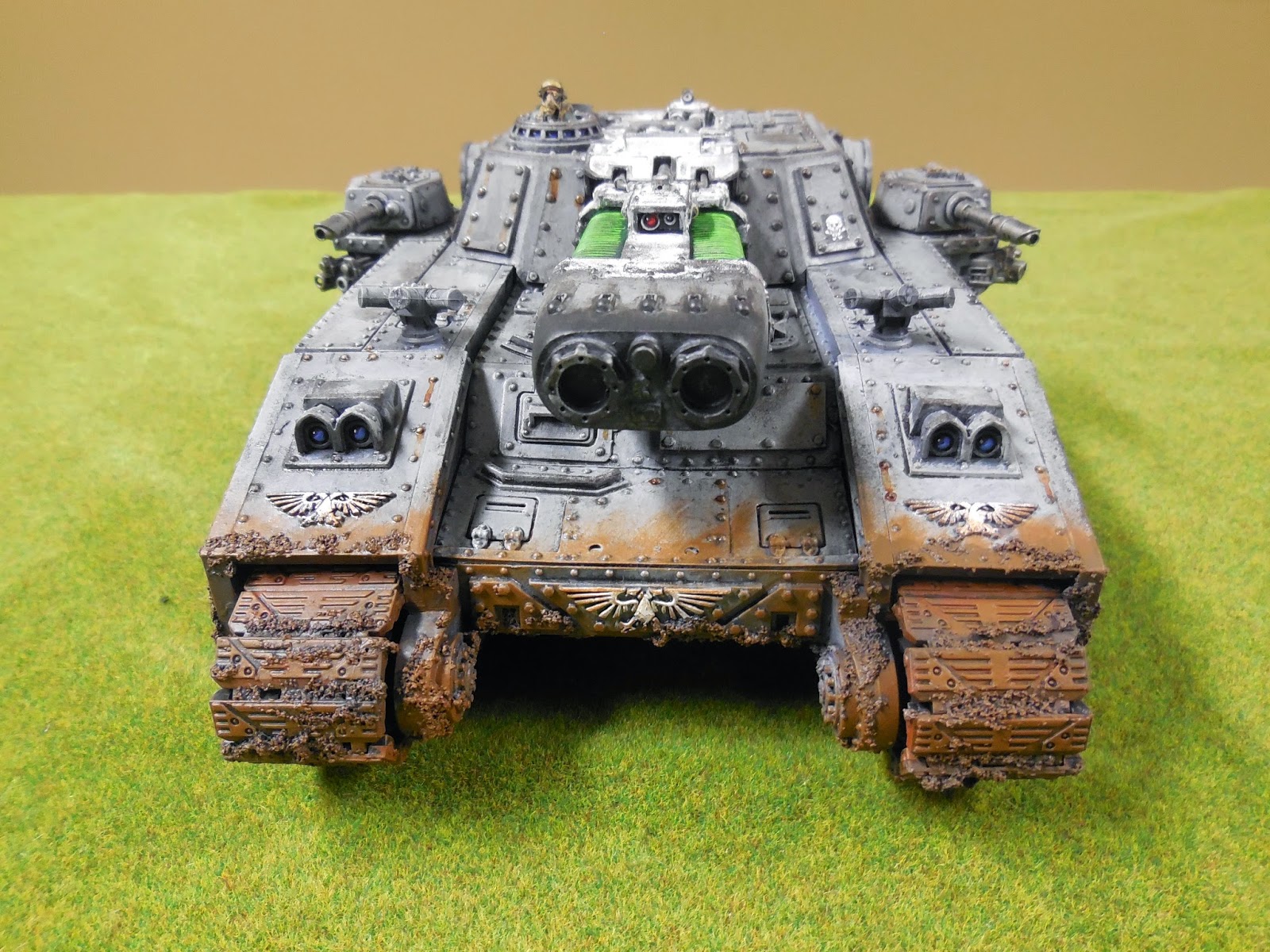 Paintwork was heavily chipped with a sponge. The stripe was weathered first with Codex Grey chipping, then with a mix of black and Dryad Bark to represent deeper chips. Lenses painted and glossed in standard technique. 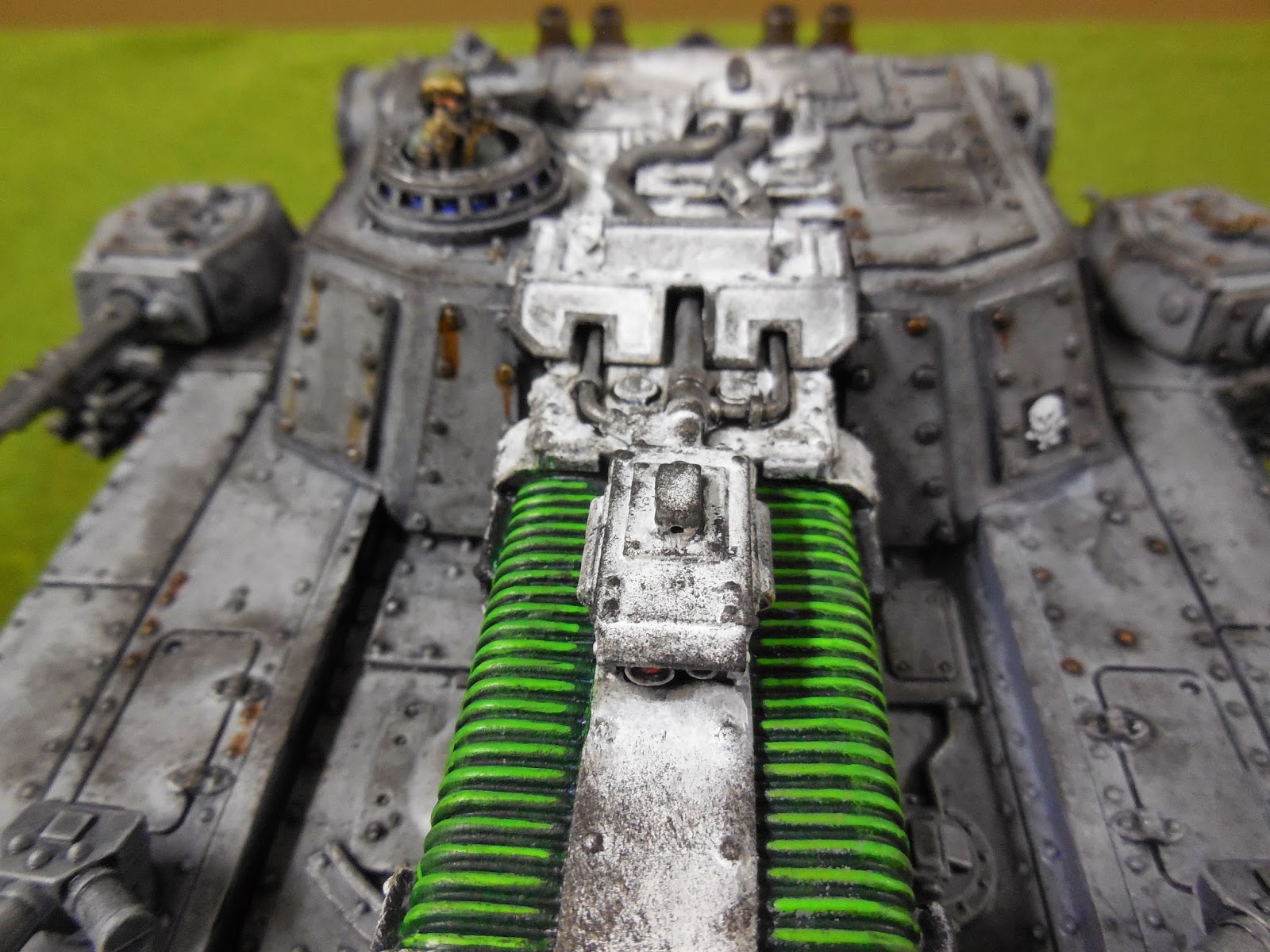 View from the business end. 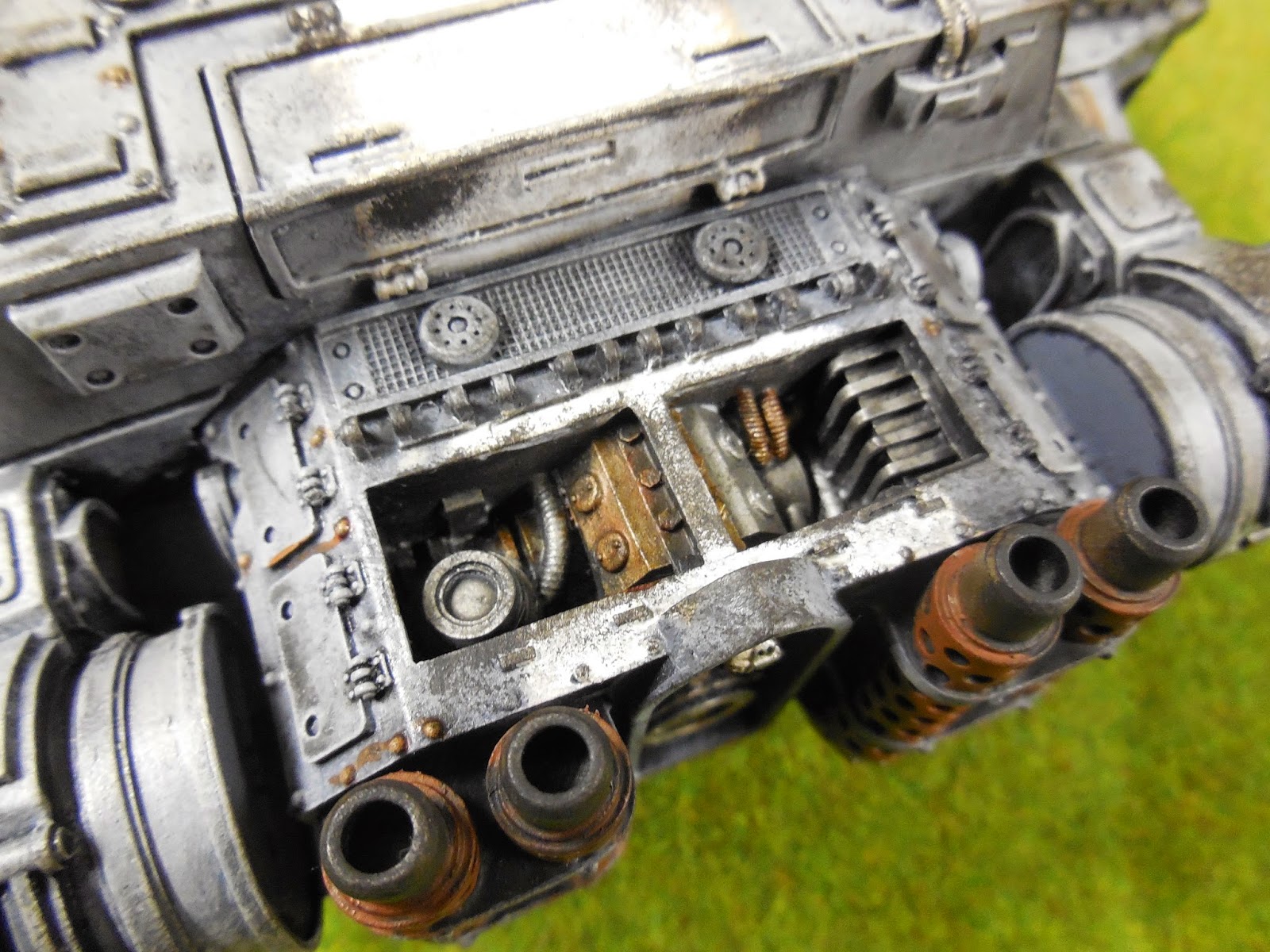 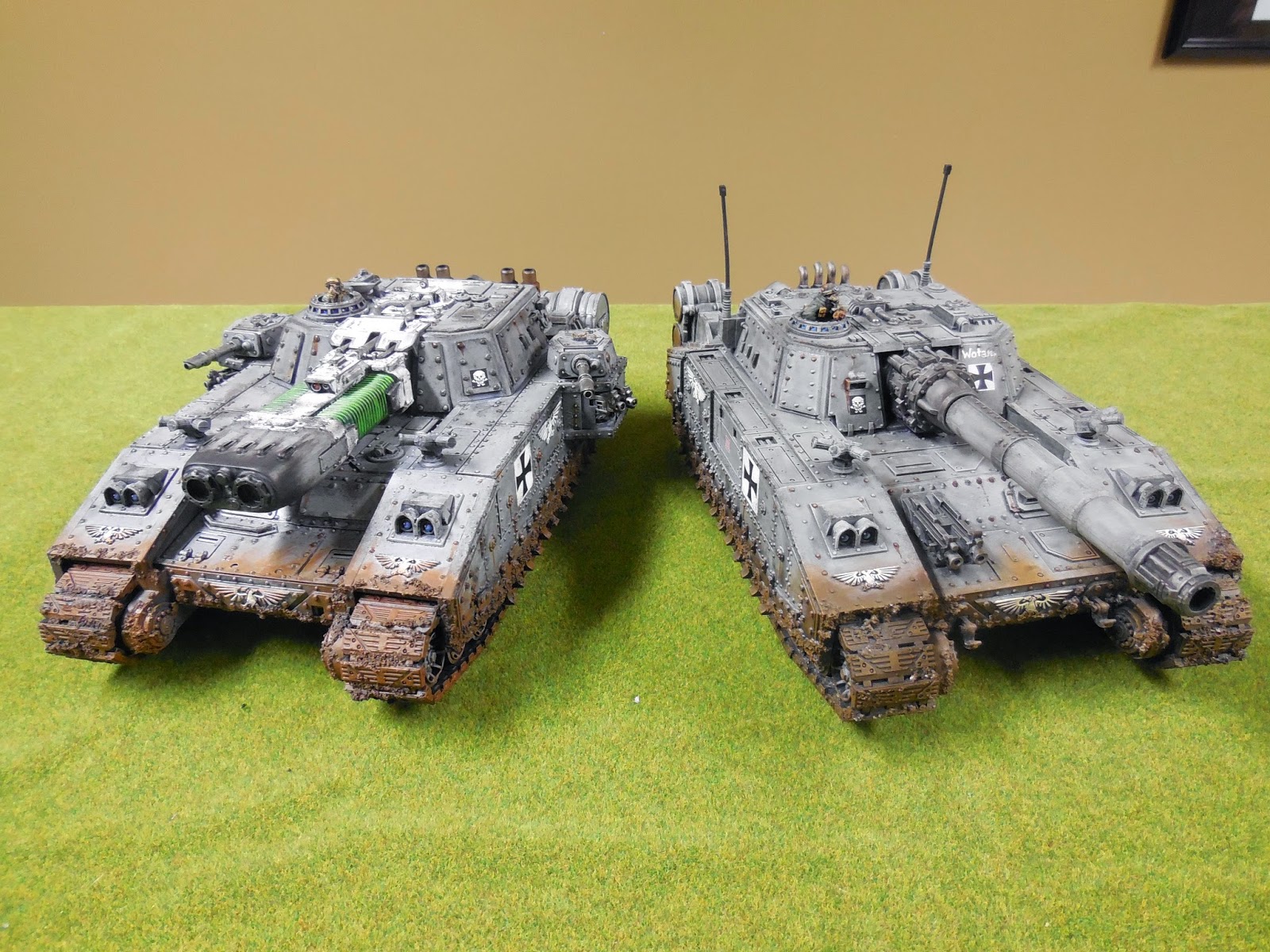 Here are the two super-heavies together. It'll have to be a big game to accommodate these two, but we have plans...
Posted by Dallas at 4:00 PM

Did you air brush that thing at all?

Thanks man. Nope, no airbrushing at all on that. Just an big old brush that appears to have left stray bristles all over the place... grrr.

Very nice. I've been eyeing one of those up as my next addition.

Very nice! I look forward to seeing them on the table.