After a long time in the works, it was finally time to break out my World War 1 Canadian and German forces for a game of Through the Mud and the Blood.  The scenario was a fictional one looking at the possibility of Canadians taking the initiative early in the war, when historically they fought like hell, but followed orders a little too closely.  A key example of this was demonstrated in one of the 2nd battle of Ypres engagements where the Germans had a machine gun setup enfilade in a farmhouse on a flank that could have and should have been dealt with, but since it was not one of their objectives the Canadian leaders did not redirect any sections at it, not knowing if they had the operational freedom to do so.  What could they have accomplished if they knew that they had some leniency to adjust plans in the field right from the start?

This week we will be re-visiting the “Through the Mud and the Blood” World War 1 rule set that Curt introduced us to last year. The scenario is fictional, but based on several accounts of Canadian breakthroughs of the German lines in April - June of 1915 from the excellent books “Gallant Canadians” and “The Brave Battalion". Several times the Canadian troops rushed the line and took objectives that no one reasonably expected them to take, while taking casualties that would have sent other troops into retreat. Then, being still new to the war and their leaders unsure of how much freedom of control they had, just stopped. Not willing to take the initiative, they instead followed their orders to the letter.

This week we will explore what could have transpired, if one fateful night several sections of Canadians from the 10th and 16th Battalions had decide to advance into enemy territory.

Canadian Briefing: It’s early in the war, shortly after the 2nd Battle of Ypres; the lines are still confused and not quite settled back to their old grinding stalemate positions around the town after the German’s vile gas attack a few weeks ago. In an effort to gain back ground the 10th and 16th were sent forward to objective K5, a trench line on high ground leading to low lying farmland behind. The German defences had not been prepared properly for your assault and they retreated from the line. In fact, less than a mile beyond the line the farmland looked untouched by the war, all the fighting having taken place from the ridge westward.

Sergeant A.L. Lindsay has taken the initiative and ordered several sections forward behind enemy lines in the dark hours of the night, before the Germans can prepare any defence in depth or worse yet a counter attack. The plan is to follow the routed Germans in the hopes of finding a higher level commander and disrupt the chain of command so that no immediate counter attack can be launched against K5.

Just before dawn, and far behind enemy lines in the confusion, your scouts report a lightly defended farm house up ahead where they have spotted several German officers in deep discussion poring over maps. The farm house is located along a crossroad that has hedged fields surrounding it, a perfect place to sneak in close before attacking.

Can the Canadians prove successful behind the lines. or will they end up as more names to be etched on monuments, lost in the mud of Flanders fields?"

The Canadian commanders would be Kevin, Jim, Brian, and Bill, with Dave lending moral support.  They had 2 sections of 10th Battalion riflemen and 2 sections of 16th Battalion riflemen. Two of the sections were over-sized and had additional assault elements in them. The mission for the Canadians was to break through to a farm where German officers were spotted gathing and planning.  Once there they need to either capture any enemy documents preferably attack maps or plans, or if none are there capturing a German officer will do, as long as you can bring him back alive.The Canadians are attacking at dawn and have excellent cover to advance through.  However, they realize they are deep into enemy territory and will need to retreat as soon as the enemy realizes they are there and sends reinforcements, how long that will take, they don't know.

The German commanders were Greg and Dallas.  They only had 2 small rifle sections, but did have an HMG as well.  The mission for the Germans is to simply hold out and keep the Canadians at bay long enough that re-enforcements arrive to send them scampering off.  While vastly outnumbered, and the enemy having ideal cover to advance against them, the Germans have some small artillery nearby that has already zeroed in on a few strategic choke points.  Unfortunately ammunition is limited and there will only be a few rounds of SOS fire support available. The Germans need to hold out for 10 turns before reinforcements arrive.
The Canadians setup three blinds on one side of the table and one on the other, attempting a forced flank manuever up the right hand side of the board (looking from the German side as in the above photo) since it had cover further up the field.  A single section would advance up the other flank, to keep the Germans honest and not  allow them to counter attack on a flank.

The German commanders setup a blind in each building and one just behind and centralized for support options.

The first few turns went well for the Canadians, rushing forward while still under their blinds to get as close as possible to the German held farm house.  On the second turn, the German commanders reveal a rifle section located behind the other two blinds for support, and send a runner to the rear to attempt to initiate an SOS artillery strike.

On the third turn one Canadian blind gets too close and the Germans decide to reveal themselves and attempt to spot the enemy.  The Canadians have been spotted, by an HMG section!  Luckily the officer had to use his initiative to spot and the section would only be firing at the end of the turn. 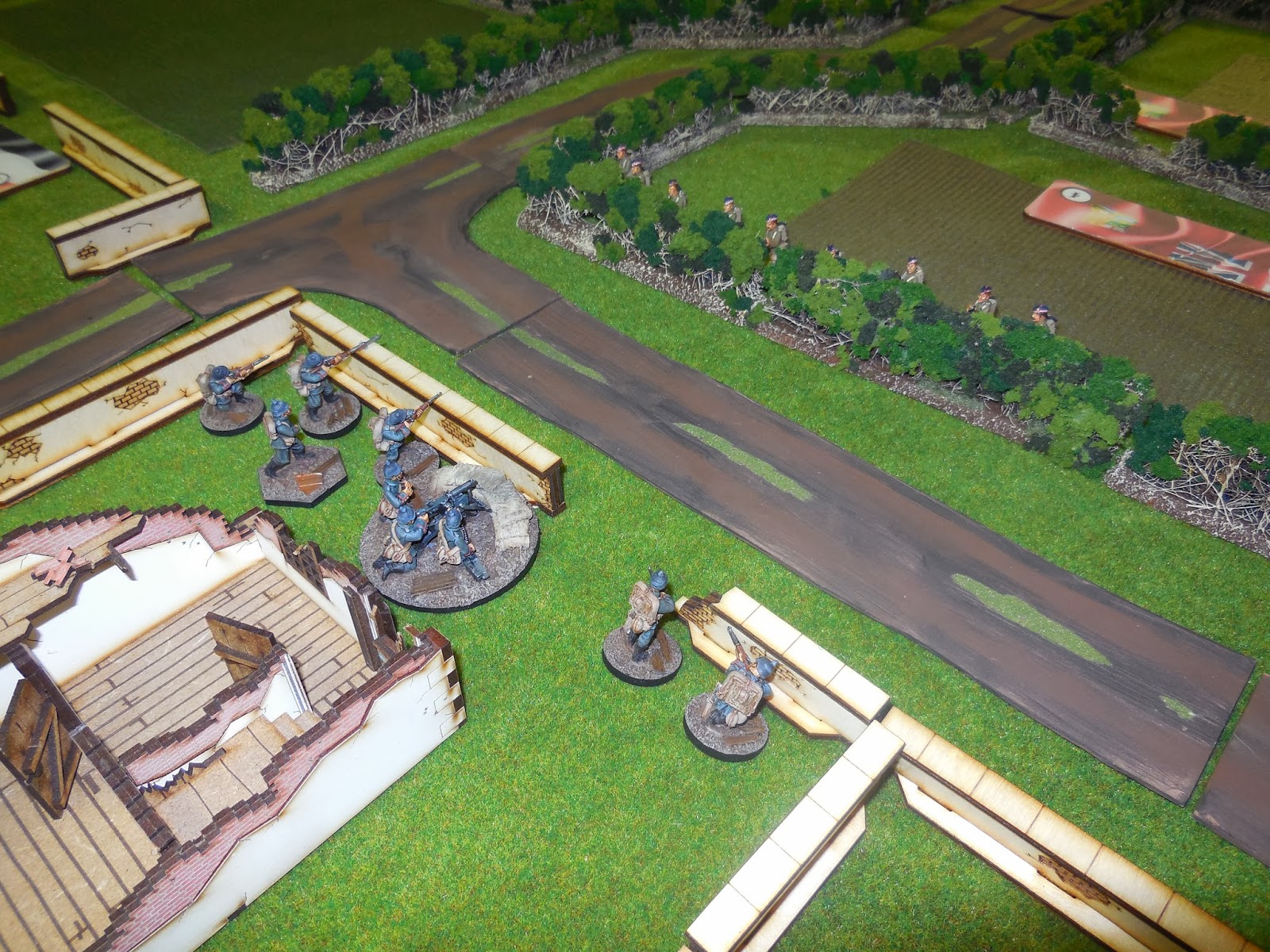 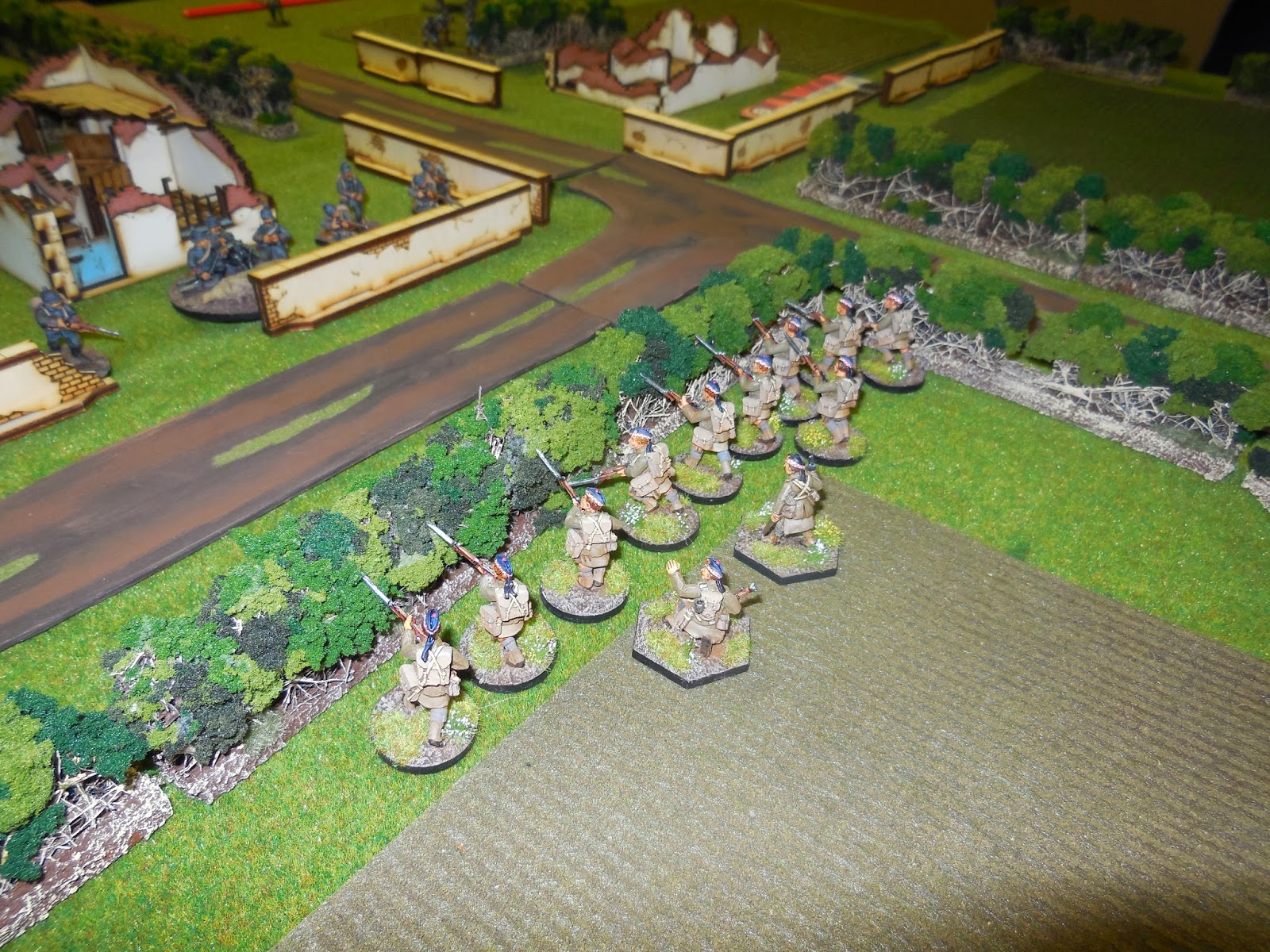 The news keeps getting worse for the Canadians on turn 3 as the German artillery starts firing against the choke point in the hedgerow that they were using to advance through.  Of the 4 shells that landed that turn, one hit each of the three Canadian units coming through the hedges, and one deviated far enough back to affect the Germans themselves.  Remember everyone - Friendly fire isn't.

The artillery only had minor effect though, inflicting a few casualties on the Canadians and one on the Germans, as well as a few points of shock all around.

On turn four the Canadians, trying to advance out of the artillery fire and into the German lines assaulted on the far right.  However two sections were struck by the continuing artillery fire and left with more shock and a few casualties.  The Canadian players were getting extremely worried with shock piling up and still one more turn of incoming fire from the artillery.

Therefore only a single section could mount an attack. While the attack was swift, if met stiff resistance from the Germans dug in behind the brick walls of the farmyard.  The first round of combat saw only shock placed on either side, but then since it was a draw and a second round was immediately fought, 3 Canadians fell to only 1 German.  The surviving Canadians withdrew back through the hedges with enough shock to bottle. 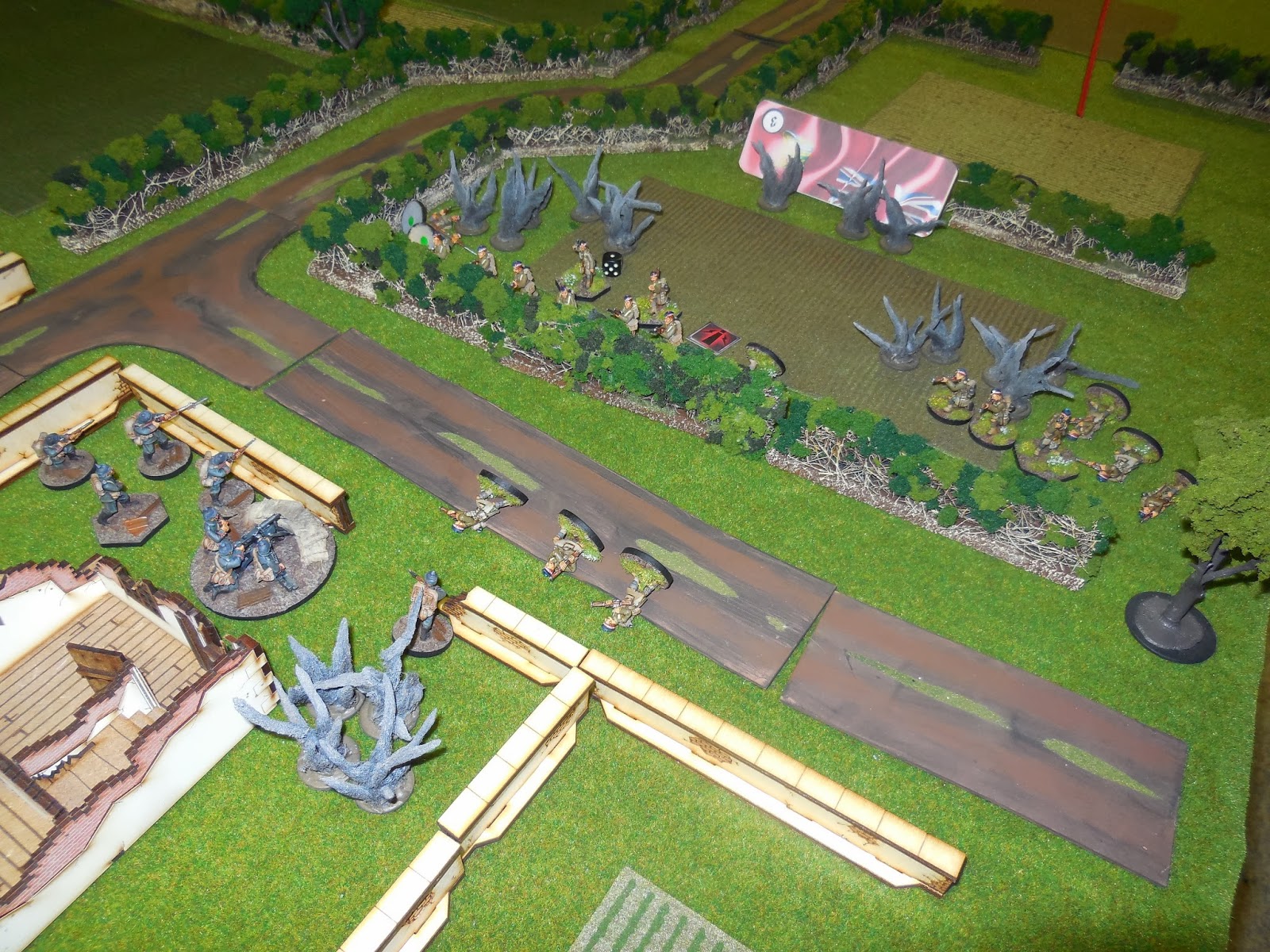 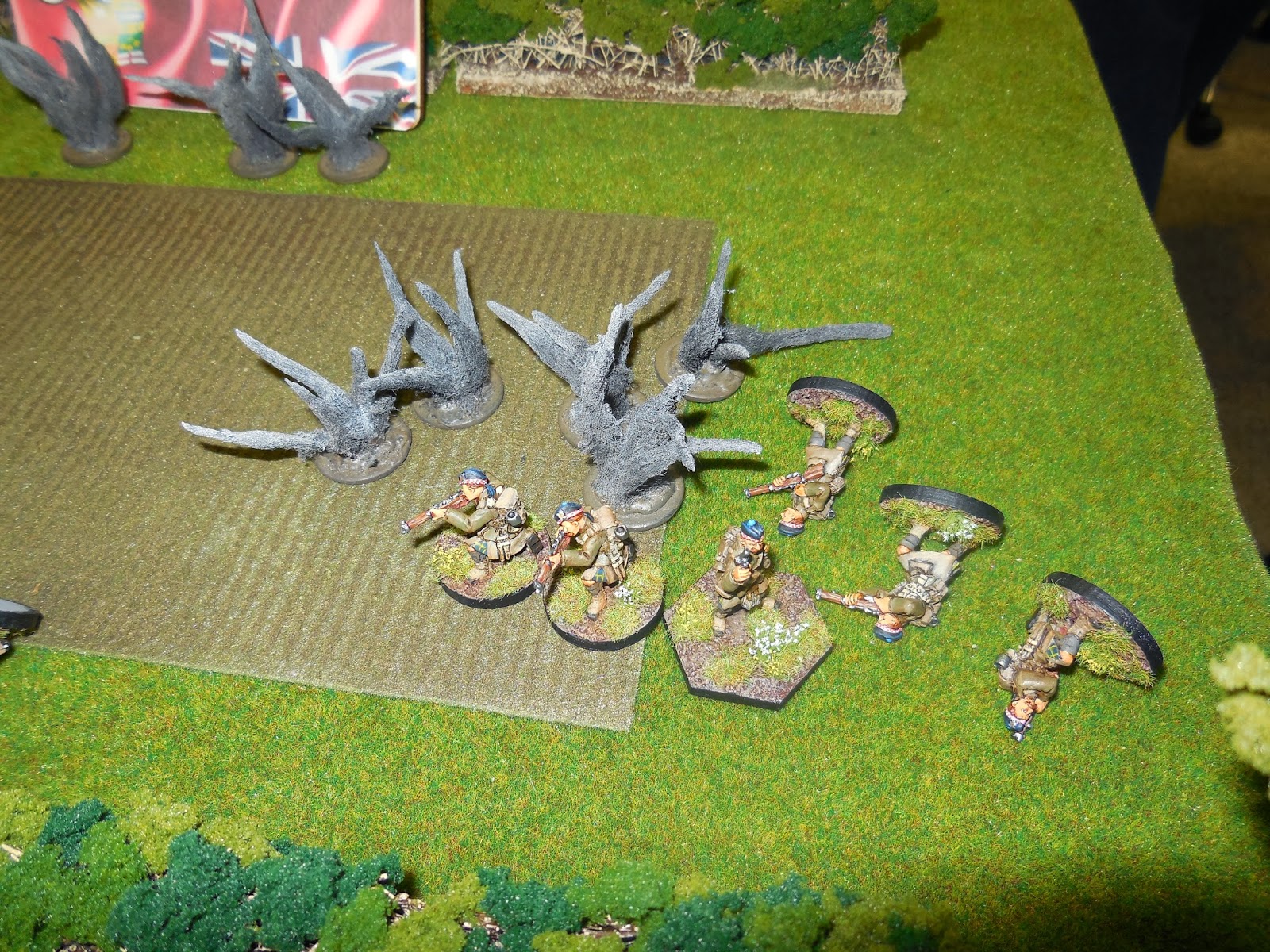 Along the left flank, the Canadians advanced far enough to trade fire with one German rifle section, forcing the Germans to alternate between dealing with them and the larger threat to the right. 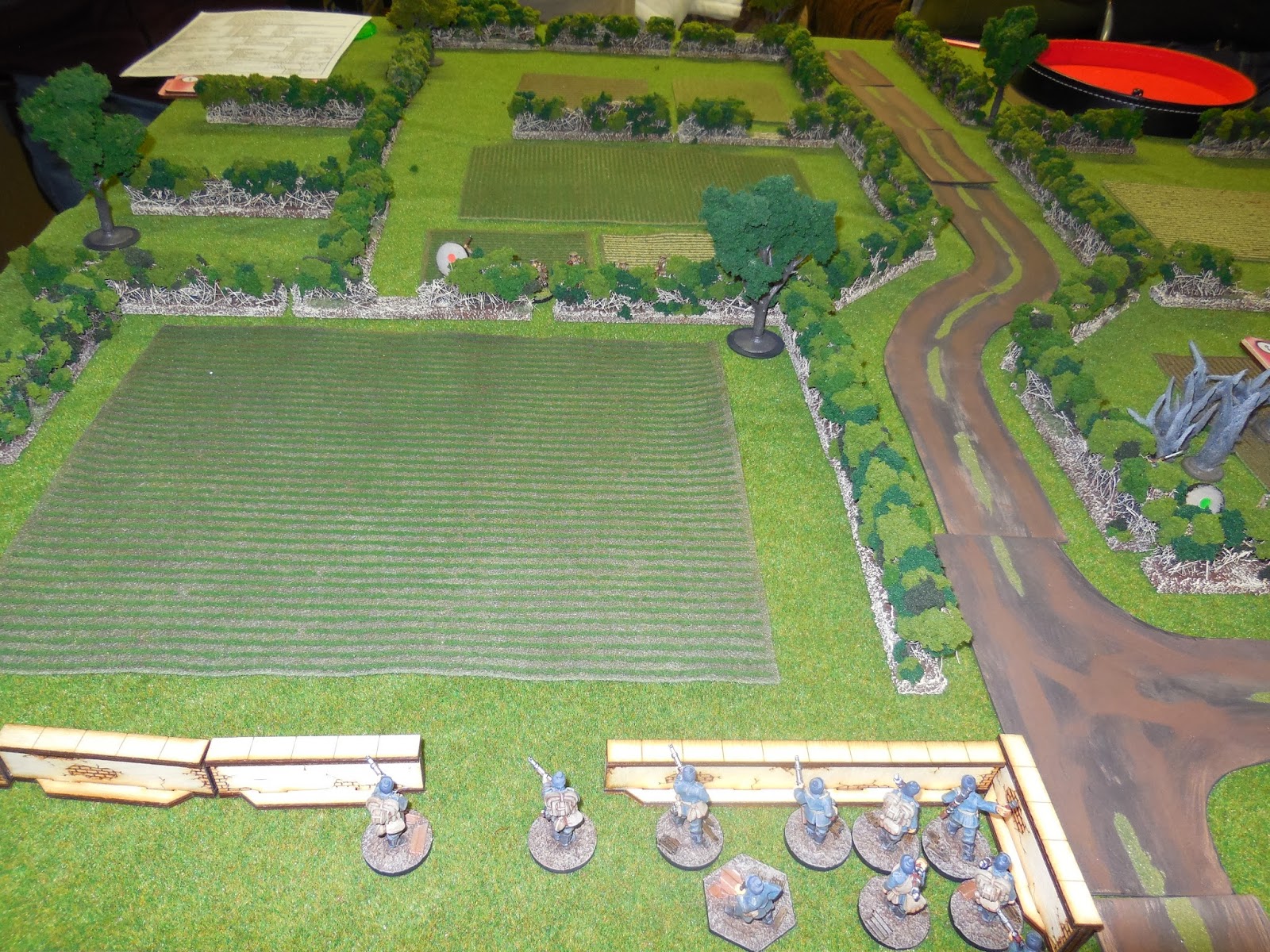 Turn 5 saw the last rounds of artillery landing, once again killing a few Canadians and dealing out shock in large numbers.  The Canadian forces big men gave the troops a stern tongue lashing about staying true to God and Country and they held their position.

Turn 6 saw shots trading back and forth as both sides tried to remove enough shock to accomplish some movement in the coming turns.

Turn 7 saw the Canadians launch yet another assault through the hedges at the HMG squad, this time with the remains of an over-sized sections through.  The HMG section did well, killing a Canadian and inflicting 2 points of shock, but the Canadians having them vastly outnumbered killed 3 and inflicted numerous points of shock.  The few surviving Germans had no choice but to fall back as they lost combat and bottled. 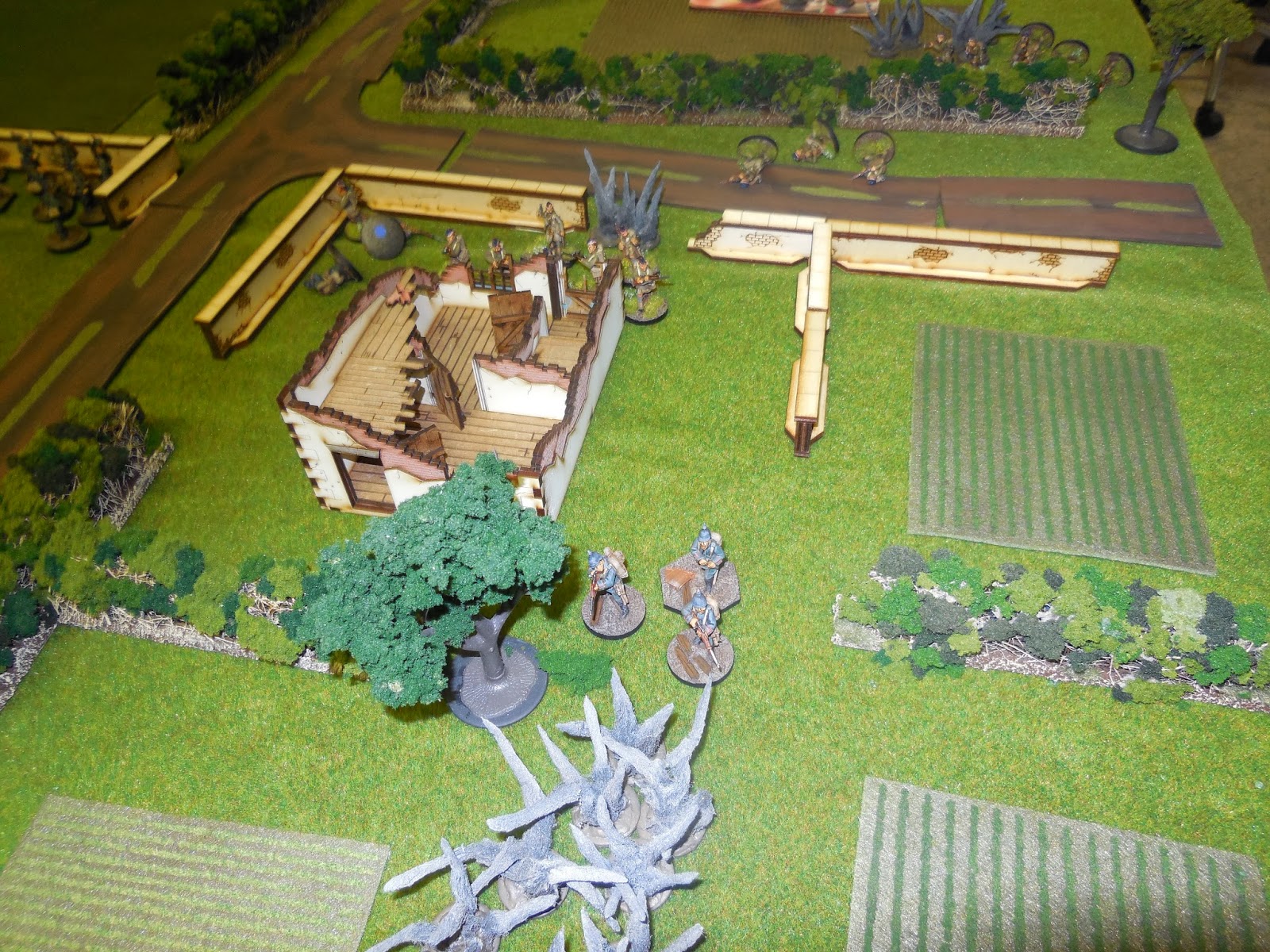 The Canadians had one of the farm houses in their possession, would it contain anything of value?  They moved into the house for cover and to start the search. 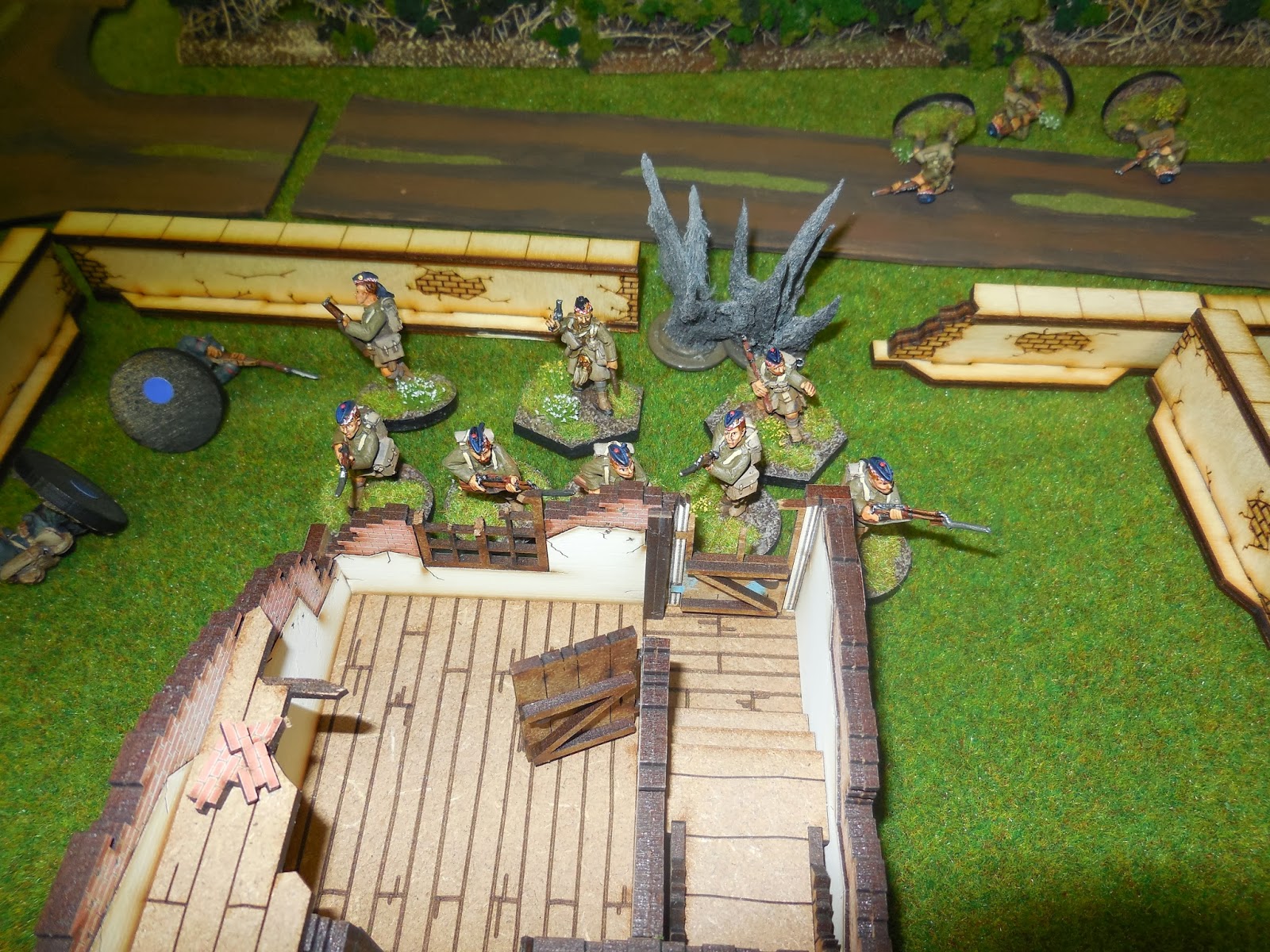 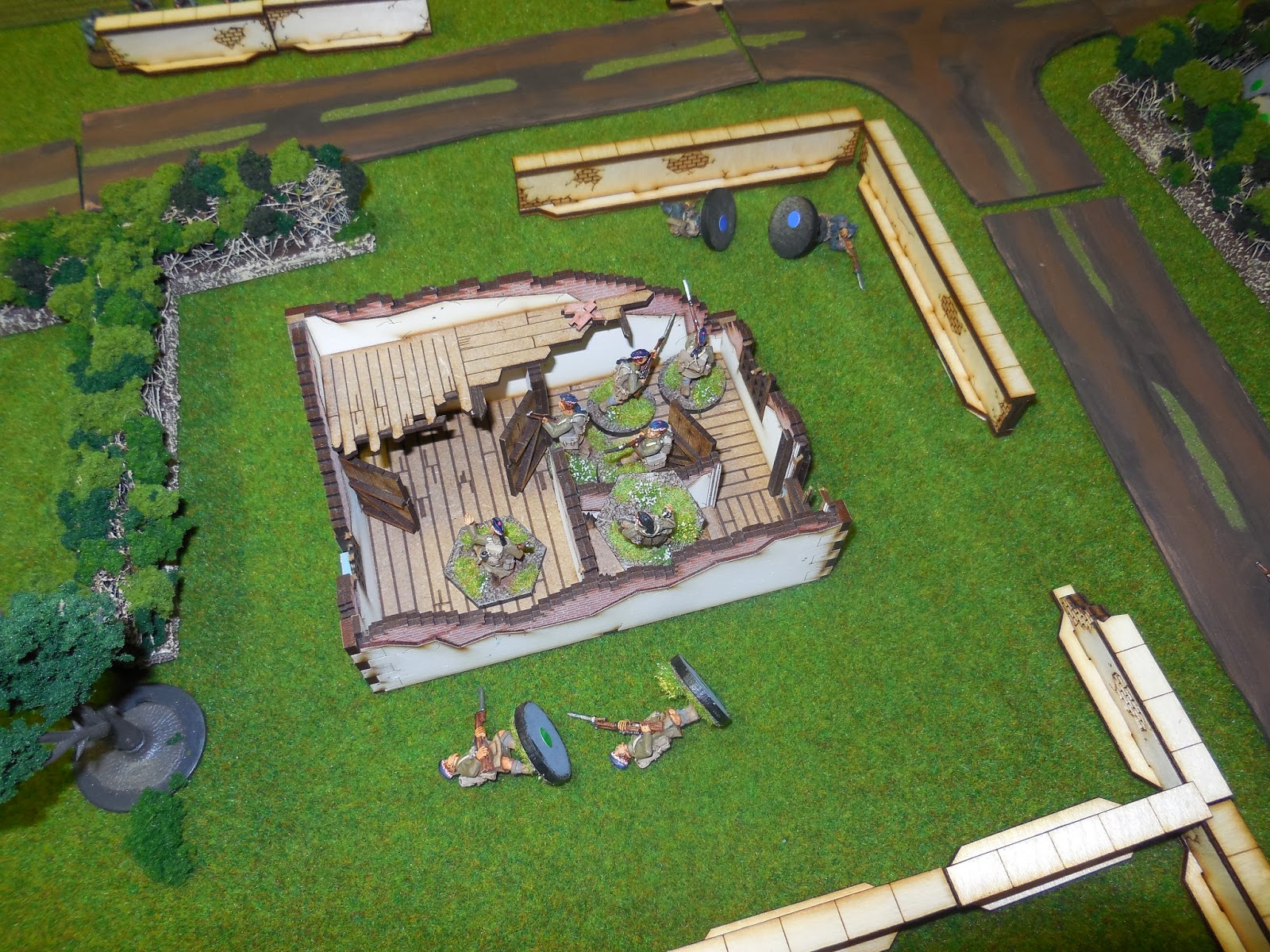 The Canadians having moved in and were rooting around in the farm caused concern to the German commander who directed all of his men to fire at them, inflicting 2 casualties and a few points of shock.  The other Canadian sections provided covering fire, but failed to accomplish much.

The German forces across the road combined forces on turn 9 and launched a long distance assault on the Canadian forces in the farm house. This time the tides were turned, with the Germans out numbering the remaining Canadians almost 2 to 1.

The Canadians however had the advantage of solid cover in the building  and drove the Germans back after 2 bloody rounds of combat.  Leaving 2 more Canadians dead, but also saw 3 Germans fall from the 2 assaulting units. This forced the Germans to fall back from combat but not to bottle. 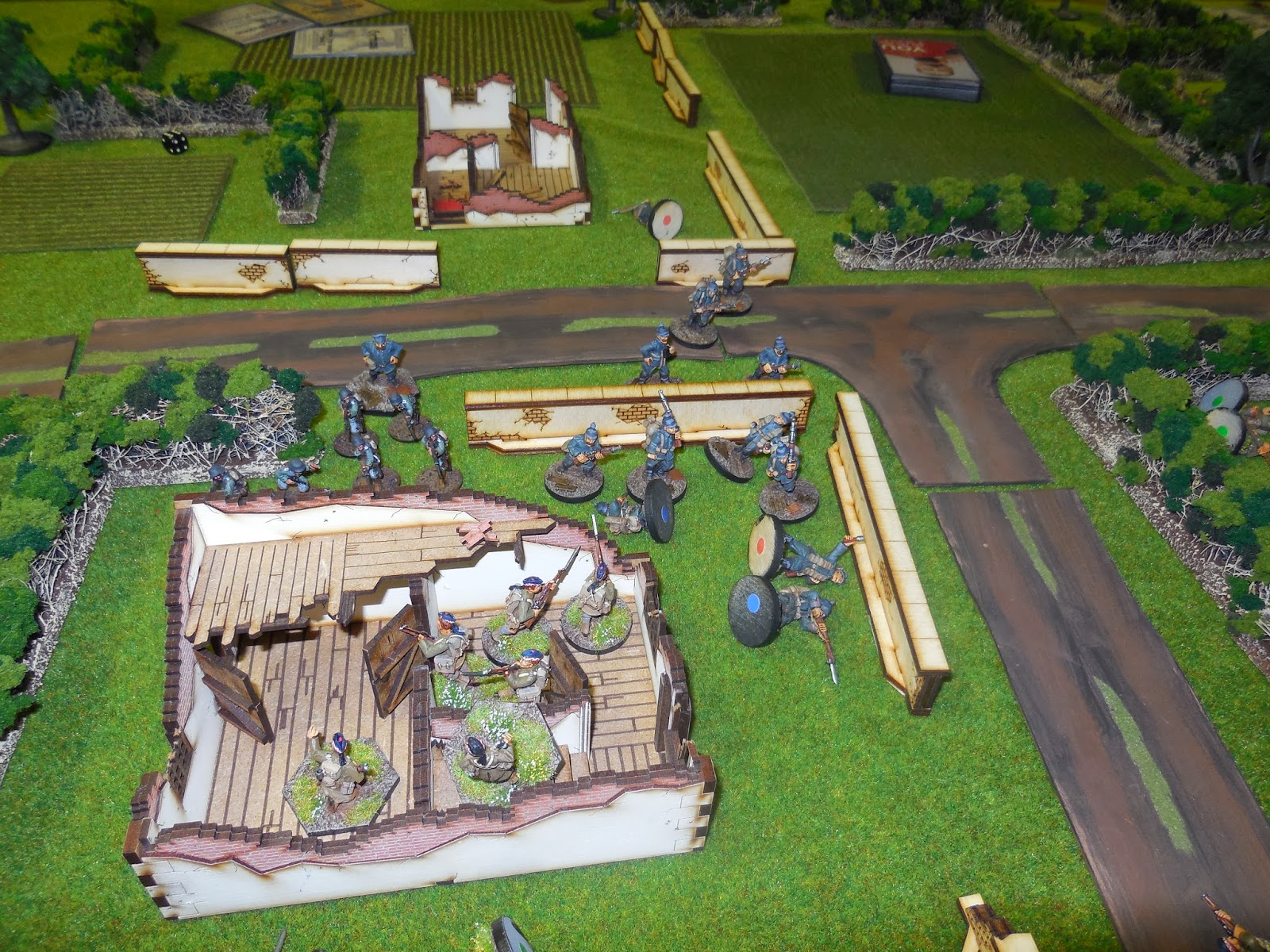 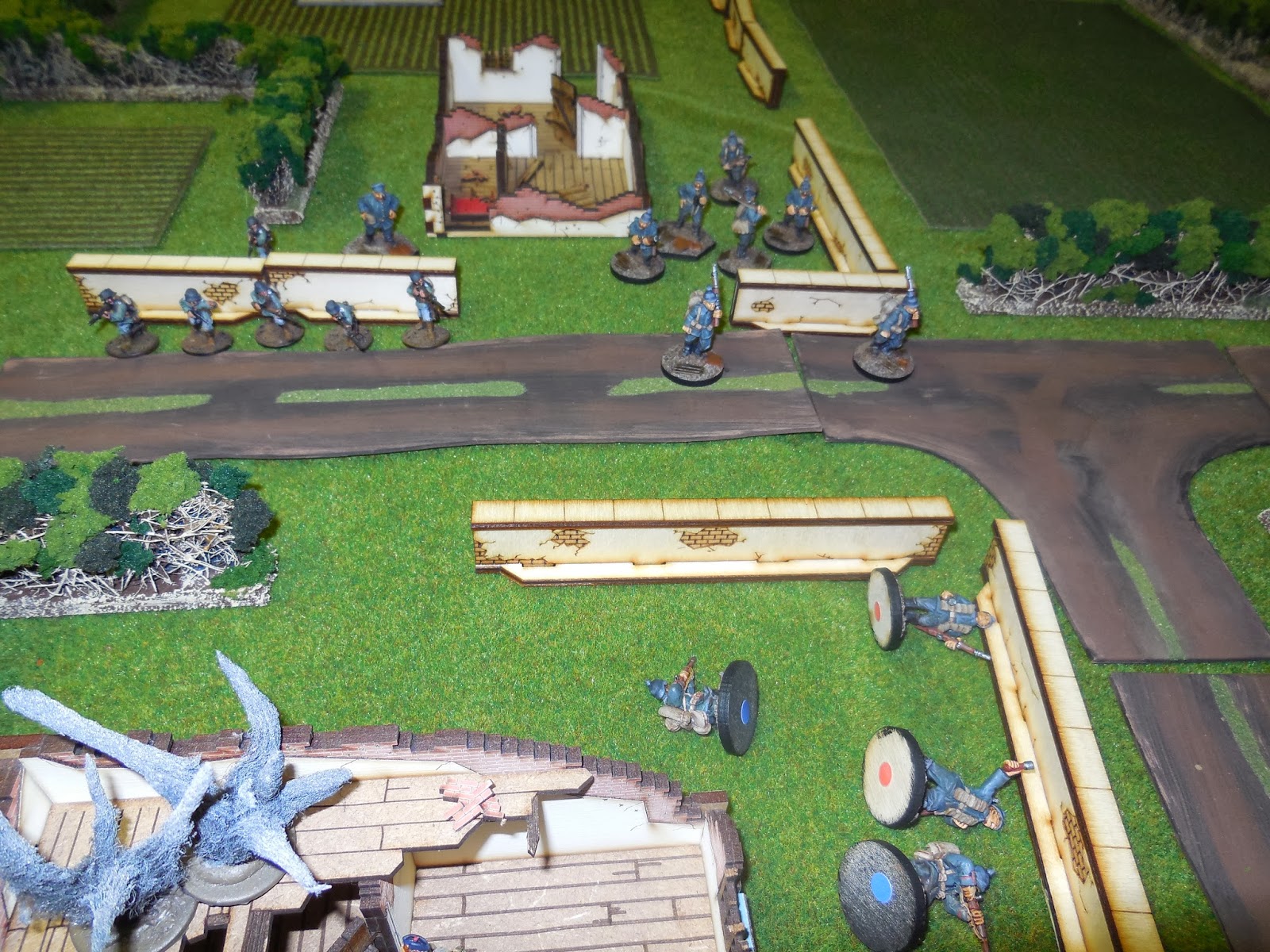 Turn 10 arrived and having survived the German assault, and having found several planning documents in the farm house on turn 9, it was time the the surviving members of the 16th Battalion to sneak our the other side of the farm house and make their escape just before the German reinforcements arrived. 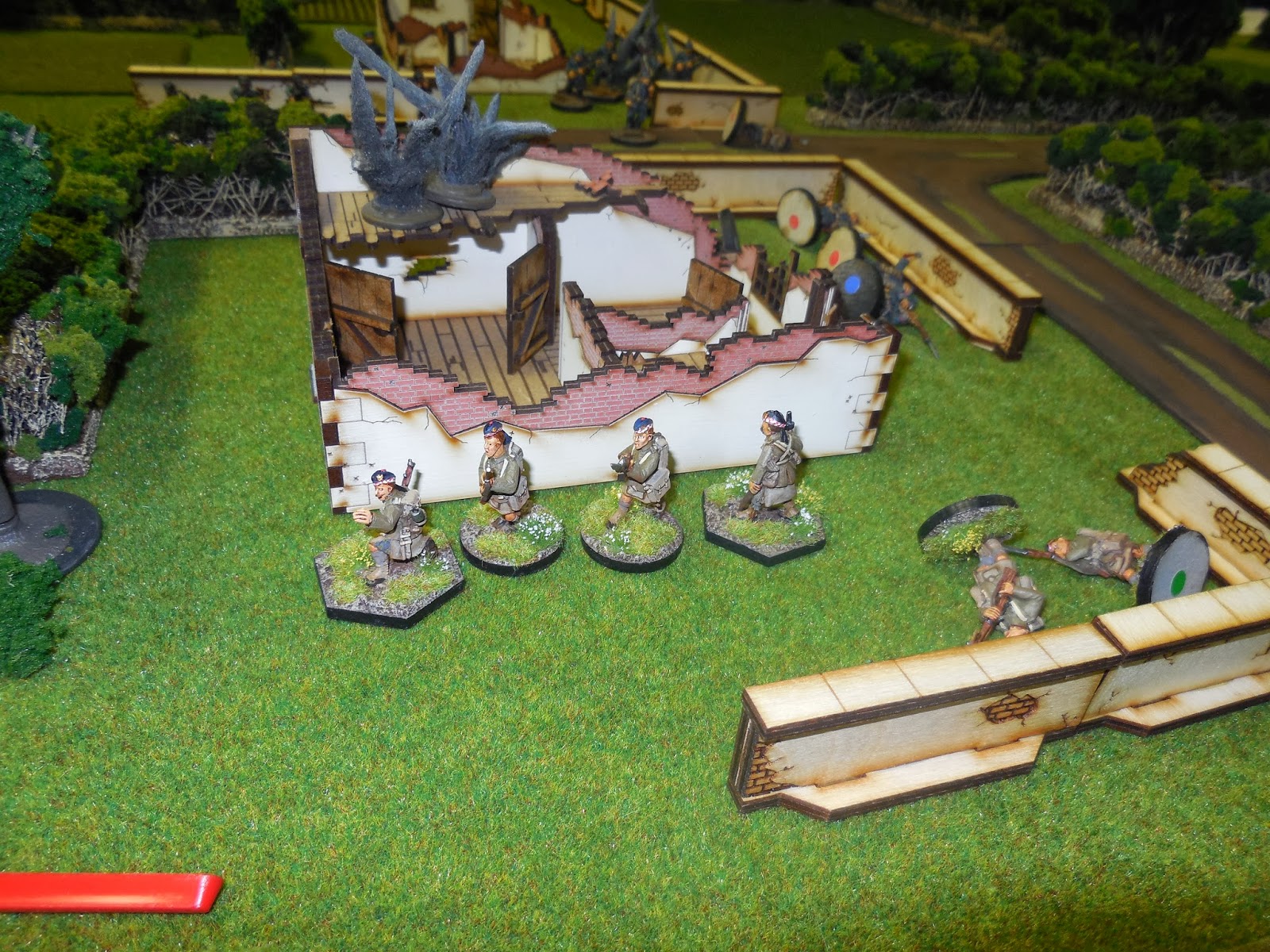 Overall the game went extremely smoothly.  Early on the Canadians were extremely worried when the artillery opened up as it looked like they would be pinned and killed before they even reached the German lines.  The Germans gained even more confidence when the first Canadian assualt failed and was driven back and Canadian confidence faultered even more.

However, as in real history the Canadians held their nerve through everything and kept on going.

The Canadian assault on the HMG was a major turning point as it gave them free access to at least one building for searching, which turned out to be the correct one.  The Germans then felt good with an assault going against the Canadians with almost 2-1 odds, however Brian (don't tell me the odds) was rolling for the Canadians, and saved the day.

In the end the game came right down to the wire, as German re-enforcements could have started arriving the following turn.

Hopefully everyone had a fun game, and I will break these figures and terrain out more often now that they are done.

Email ThisBlogThis!Share to TwitterShare to FacebookShare to Pinterest
Labels: 28mm, Canadians, Germans, great war, Through the Mud and the Blood, too fat lardies, WW1

Fantastic looking table, and it sounds like it was a great game.

That was a great game Byron. We were so close with that assault!!! Oh well.

Looks to have been a great game! Right down to the wire which is always exciting.

Even though the Germans questioned the "command structure" of the Canadians, we did very well despite being hammered by the Arty strikes, and driving home the assault on the HMG section and the farm house! (Well done, Brian!)

That was a great game Byron! Hope we revisit those rules again in the near future. Really enjoyed that one!

Great looking game, great to see the rise of the early war, just finished an encounter on the Eastern front.
http://dusttears.blogspot.co.uk/2014/02/the-fall-of-lemberg-galicia-1914-part-2.html
Cheers
Stu