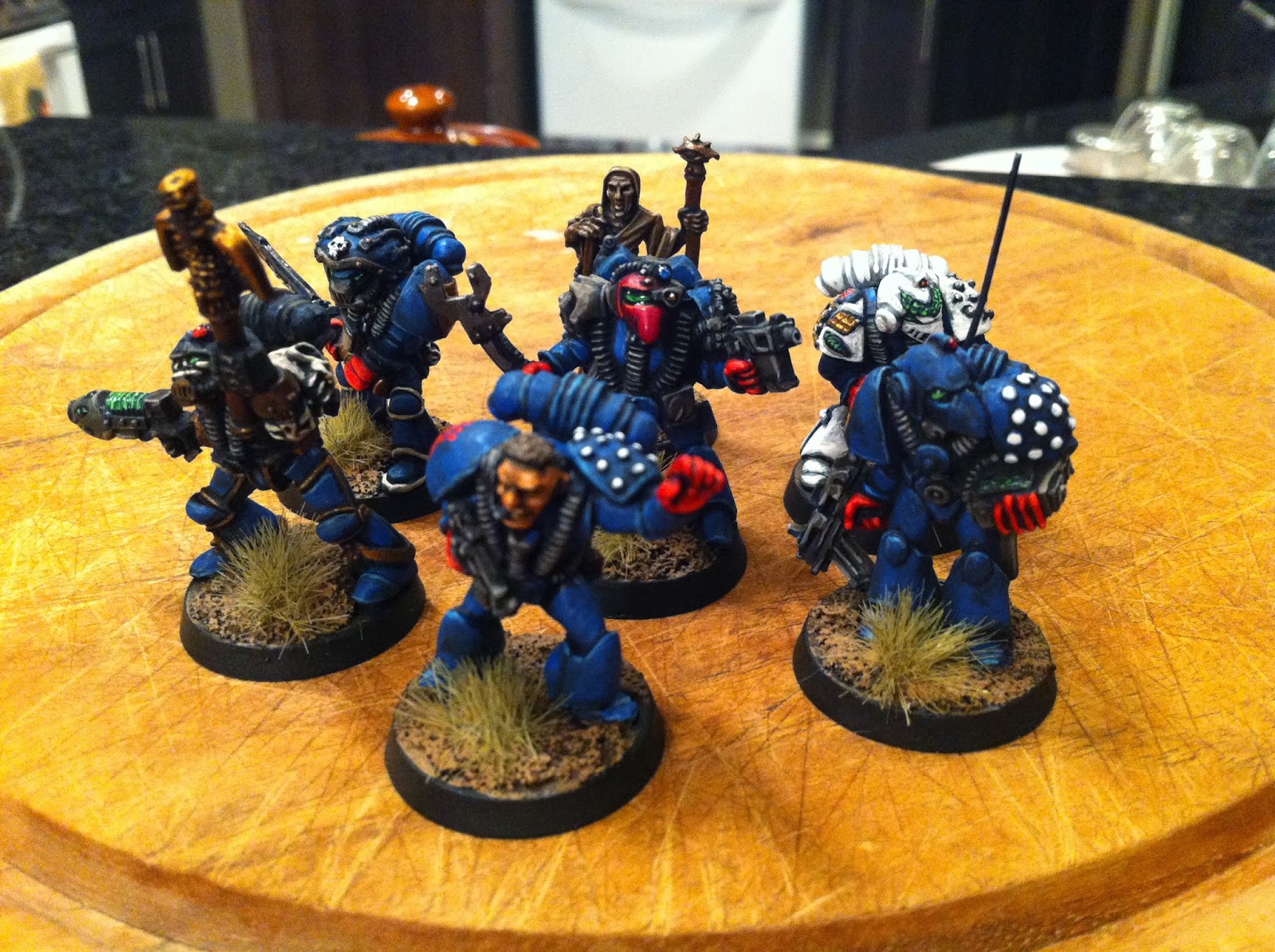 Continuing with the Rogue Trader-themed entries to Curt's Analogue Hobbies Painting Challenge here are some Crimson Fist command elements.  There is a Chaplain, a Medic, a Librarian, some comms guys, at Techmarine and an Astropath. These guys will help the Crimson Fist Commander run his Company.

Up first is the Chaplain - back in the time when GW was much more selective with skulls (now found on every surface), the Chaplain was the exception.  Chaplains are meant to bring spiritual comfort and guidance to the soldiers. A Space Marine chaplain, on the other hand, is a grim spectre of death, with skull everything - helmet, shoulder plates, etc. If this is what gives comfort to Space Marines, no wonder they are stuck in so many pointless last stands.  And of course the Chaplain is a kick-ass fighter, hammering the Emperor's enemies with his arcane weapons and motivating the battle brothers around him.
Up next, the Medic, another role distorted in the grim darkness of the far future.  Although the Marine Medic can sometimes treat wounded battle brothers, mostly he goes around the battlefield putting the wounded ones out of their misery with an "Emperor's Mercy" - essentially a bolt to the head!  He then recovers genetic material so a new Marine can be created.  Ah - the Emperor's circle of life…


The (very spooky) Librarian.  I find it very telling that in the Warhammer 40,000 setting, the gathering, storing and organizing of knowledge (something we take much too for granted these days) is an activity that is regarded as mystic, arcane, dangerous and even grounds for suspicion.  Only the rare trusted psychics - who weren't fed to the Emperor, and were tough enough to become Space Marines - carry out these duties in the Space Marine Chapter.  And, as with the Chaplain, it's no staff function - this fellow can kick ass with his funky "force sword", psychic powers, and guns.
The Techmarine. Mechanics today are already suspicious and somewhat arcane; in the Warhammer 40,000 setting, who knows how weird they would be? This fellow mends the vehicles of his Company with a mix of prayer and a huge wrench-spanner thingy…these old Rogue Trader-era Techmarines are the best!

There are two command-type models, one with a communicator and the other with some kind of data slate. I put an antenna in the one fellow, and see these two guys as either crew for an emplaced weapon, or maybe an artillery spotting team.

The Astropath - this figure, "Yerl" from the old Citadel range, is based on an image from the Rogue Trader rulebook.  Astropaths are the 4G-LTE wireless communication devices of the 41st millennium, passing messages back and forth through the warp and allowing the Imperium of Man to (mostly) stay in touch across the vast distances of the galaxy.  The Astropath lives a crummy, weird-genes-and-odd-looks, who-said-you-could-leave-your-chamber life in Warhammer 40,000, so I painted his skin tone to match. This figure will be a good objective marker or model for Rogue Trader games.

Stay tuned for more Crimson Fists - a mix of golden oldies and contemporaries...
Posted by Greg B at 5:22 PM

That librarian model was known as "CH" in my old gaming group. It was never painted, I wanted to paint it but I didn't own it, I even tried to trade for it. No idea what happened to "CH".

Thor and I used to name all the models in our armies and paint the names on the bases. It worked better in Rogue Trader times when the armies were smaller. Now I name just the squads and characters, but I don't paint the names on the bases. My old army still has the original names, I stripped a couple, but mainly I plan to just touch them up someday and use them again in their vintage paint scheme.

So much of GW's stuff is SO dark. I even know some folks who dislike the more postive Tau because they're so namby-pamby by not exterminating entire planets.
I do like the figures. Crimson Fist were always a favourite.

GW couldn't even let the Tau be "positive"... from what I understand they're secretly controlled by the C'Tan or some crap like that? I don't even know.

Anyway, these retro Marines are a nice break from their modern (overdesigned) brethren. I remember all these models from poring over the catalogs when I was younger (but didn't have any $$ to buy them). A deficit I've since remedied using eBay of course. I should paint up some of these nifty Techmarines some time.

Thanks for all of the entertaining comments everyone!

I always enjoy the dark, sort of warped setting of Rogue Trader. Having said that, I never found the Tau to be too soft...nice to have the contrast!

Allison - yes, the current marines are quite detailed, to the point where they are overdone in many cases. Less can be more. And for all that, there are quite a few of the newer designs that I like. I just wish the "beakie" helmets were common.