Check Your 6! - Hunting the Hunter

As Conscript Dallas and his lovely wife made their house ready for a move, several of us other Conscripts have taken over hosting duties over the last couple of months. Several weeks ago, I hosted a Check Your 6! game. I used a scenario freely downloaded from the Check Your 6! Yahoo Group.


History: A Spitfire of 65 Squadron indulging in the dangerous pastime of a low level solo patrol became the prey of four Me109s of 4 Staffel, JG51 that stalked it unnoticed as it proceeded northwards. However, the Germans found that they had been inadvertently lured deep into enemy territory…

Below can be seen the initial setup. To the north is the lone recce Spitfire, which I flew. From the south and west are the Me109s, flown by Byron and Bill. From the east are the 74 Sqdn Spitfires, flown by Frederick and Kevin.The planes are a mix of Bandai and Takara 1:144 scale models. The neat dial bases are from Noble Minis, obtained through I-94 Enterprises. 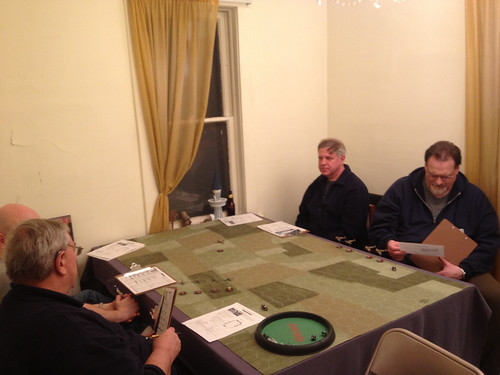 Below, Bill and Byron contemplate the Luftwaffe move. 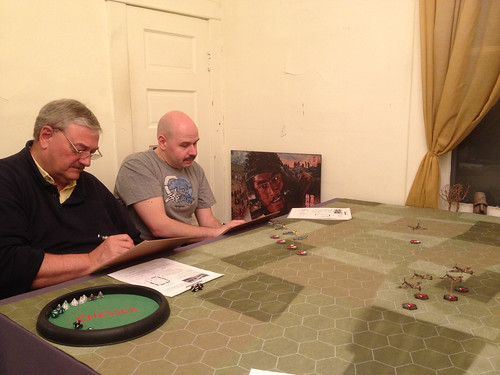 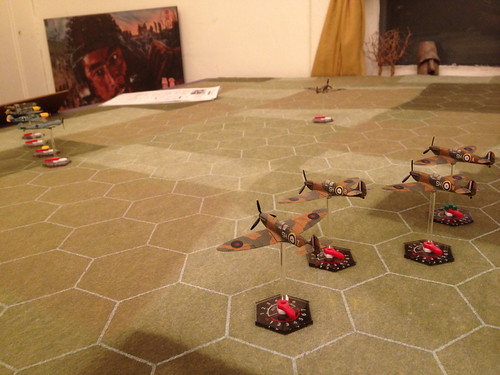 I put the 65 Sqdn Spitfire into a shallow dive and banked east, since just surviving and getting off the table would garner Victory Points. 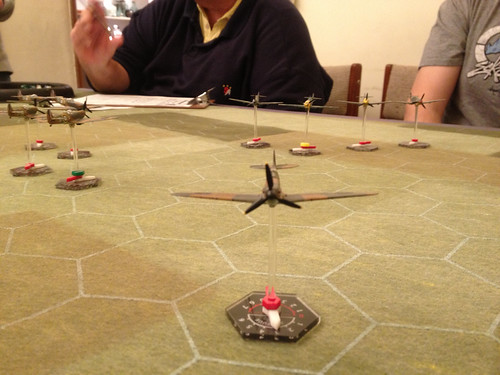 The Luftwaffe ignored the solo patrol plane and turned to face the other RAF flight. The 65 Sqdn Spitfire proceeded to fly off the table unscathed. 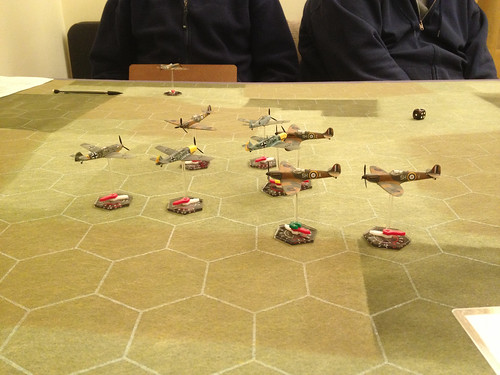 The RAF concentrated their fire on a Rotte leader, shooting down one of Byron's planes in a single pass. The pilot failed his roll and was killed attempting to bail out. 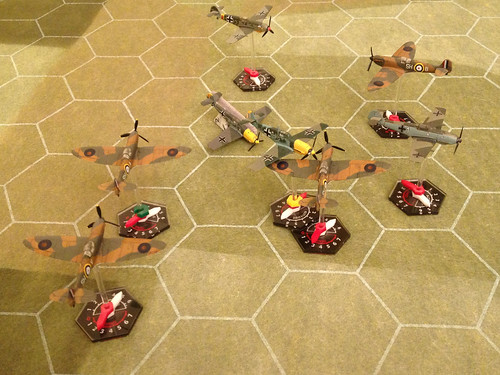 The dogfight broke up as one of Bill's planes Immelmanned to get a bead on a Spitfire. 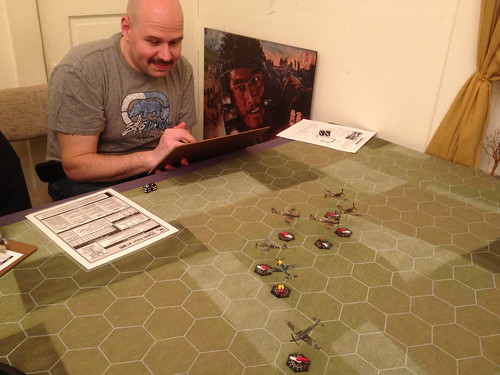 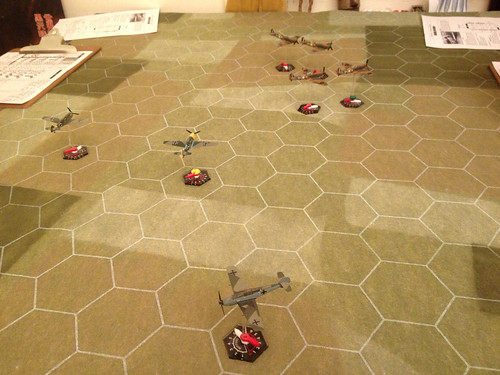 The Me109 below is angling away from the fight, heading for home. The Luftwaffe had to exit from the southeastern edge of the board. 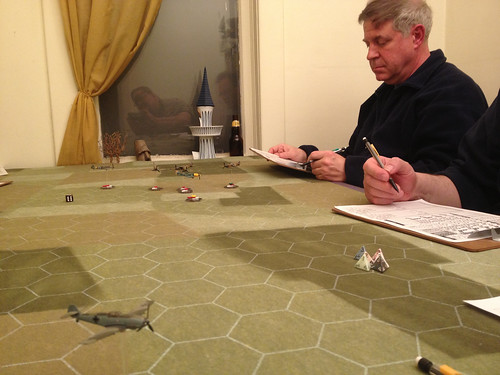 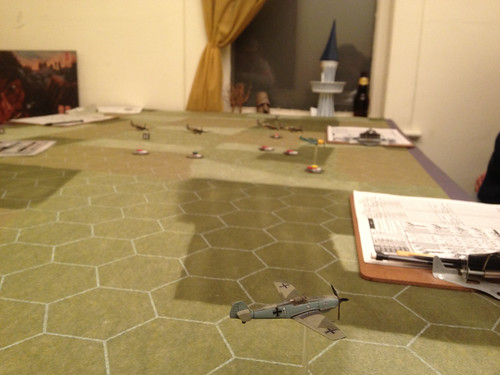 The yellow nosed Me109 had run out of cannon ammo, which made the Luftwaffe decide to try and get away with what they could. 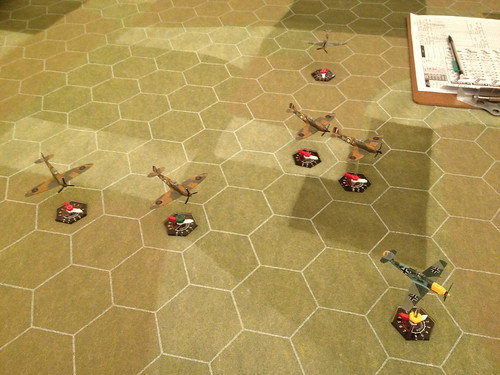 Bill's plane was hounded by the British... 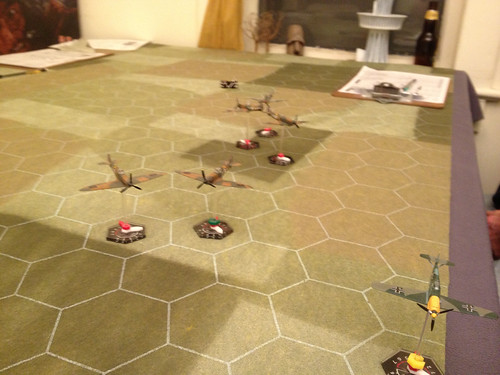 ...but canny maneuvering prevented the Spitfires from getting on his 6. 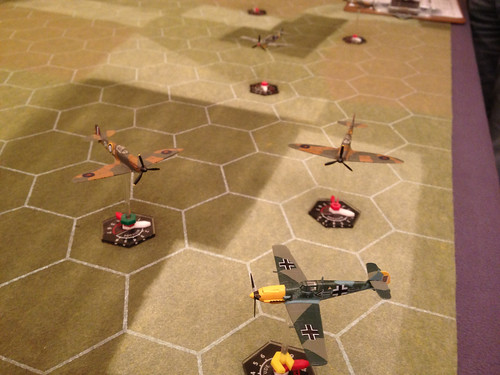 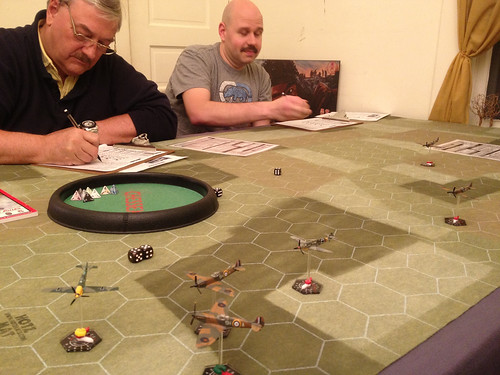 So, the remaining Luftwaffe planes were able to fly off safely. 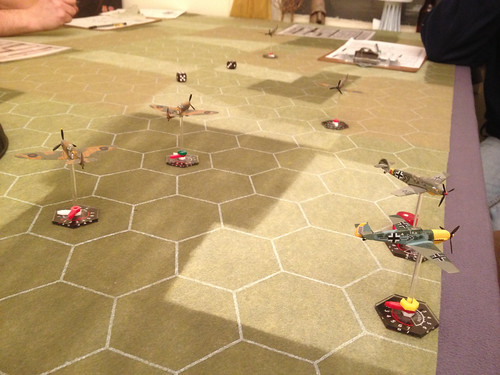 This was an interesting, sharply fought affair. The game outcome was also very similar to what actually happened.


Historical Aftermath:
Four Spitfires of 74 Squadron on patrol over Dover spotted the Germans and dived into the attack. The Germans split up, but one of them was chased down at low level by 74 Squadron and fatally damaged. In its desperate attempts to get away, the Me109 was chased inland, eventually crash-landing near Elham. It was the first Me109 to fall onto British soil intact.
Posted by DaveV at 7:47 AM