A few weeks ago I hosted another game for the Fawcett Avenue Conscripts. I am a very big fan of the Star Wars franchise; over time I must have seen the original movie (Star Wars: A New Hope) maybe 40 or 50 times. So, I introduced the boys to a new game. The Star War: X-Wing Miniatures Game, from Fantasy Flight Games (FFG),


The Core Set a starter set that features three unique missions, each with its own special rules and conditions for victory, cards, and fully assembled and painted starships. FFG has released several Expansion Packs adding new Pilot Cards and Upgrade Cards for existing ships as well as entirely new ships. All require the Core Set in order to be played. The models are very nicely painted and weathered. The Millennium Falcon is a particular favourite of mine.

The game mechanics may be thought of as a cross between Wings of Glory and Check Your 6!  Players secretly choose maneuvers each turn, limited by ship type and speed. Orders are revealed. Ships are moved in ascending order of skill, and then fire in descending order. That is, poorer pilots move first, better pilots shoot first. This allows better pilots to pull actions out of their back pockets (say, to do a barrel roll to avoid fire), as the less experienced pilots reveal their moves.

(The game uses cardboard dials to choose maneuvers. From reading the message boards, over time these dials may wear out due to use. So, for this game I made up some maneuver sheets like for CY6! for the players to record their maneuvers.)

The Core rules and FAQs may be downloaded for free, here.

I obtained a couple of Core Sets, several ship models, and obtained a Space Game Mat from Gale Force Nine (they also have a Space Station Game Mat suitable to use as the surface of the Death Star). I decided to run one of the pre-printed scenarios.

Because of their fundamental role in the Imperial Navy, Sienar engineers are vital to the Empire's hold on the galaxy. Their ceaseless toil is responsible for the most recent starship prototype, currently in transit to rendezvous with the Imperial Fleet. Alliance Intelligence discovered it only days ago and offered a substantial reward for the prototype's capture. Rebel-aligned smuglers are prepared to ambush the vulnerable equipment, and the modest Imperial escort must safely deliver its precious cargo.

Special Rules:
Steal Action: The Rebel ship with the smuggler token may perform the Steal action on a container token within Range 1. To perform the steal action, the Rebel player simultaneously rolls 3 attack dice and 3 defense dice. If he rolls more

results, he removes the container token from the play area and places it next to his Ship cards. If the number of

results is equal to or less than the number of

Containers: Container tokens do not count as ships or obstacles, and they cannot be attacked or destroyed. At the start of the End Phase, each container tokens executes a

2 maneuver toward the Rebel edge. If a container token is within Range 1 of one ship with an escort token, it executes a

3 maneuver instead. If a container token is within Range 1 of two ships with escort tokens, it executes a

Escort tokens: When a ship with an escort token is destroyed, the Imperial player may place that token on one of his other ships at the end of the End Phase. He cannot place it on a ship that already has an escort token.

Objectives:
Rebel Victory: collect two container tokens next to your ship cards
Imperial Victory: Two containers must flee off the Rebel edge of the play area. You may win even if all of your ships are destroyed.

Byron, Frederick and Kevin ran six Imperial TIE Fighters from Black Squadron, led by the video game character, Howlrunner. I ran a couple of Rebel X-Wing starfighters, one piloted by Luke Skywalker and another by a rookie pilot. Brian ran the Millennium Falcon, crewed by Han Solo and Chewbacca.


In the photo below, I can be seen just prior to the start of the game, wearing a suitably Star Wars influenced shirt from TeeFury. 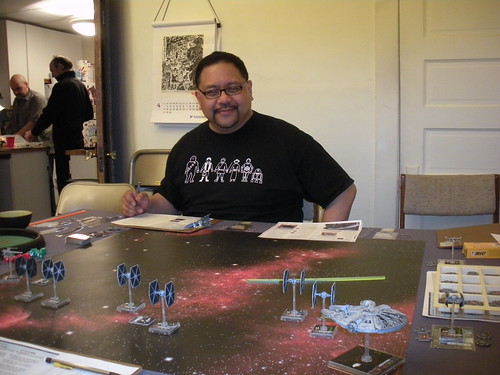 Brian set up the Millennium Falcon in the corner, near the Imperial edge, hoping to steal a couple of containers. I set up the X-Wings on the opposite side.(Note the nice factory-applied weathering on the model.) 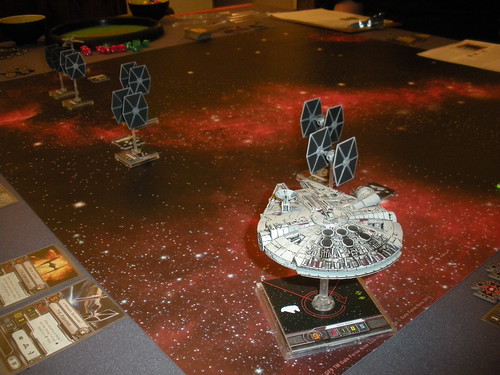 The two X-Wings focused on Howlrunner and her wingman, who were escorting a Container. The two TIEs in the centre moved in opposite directions to bring fire on both Rebel players' ships. 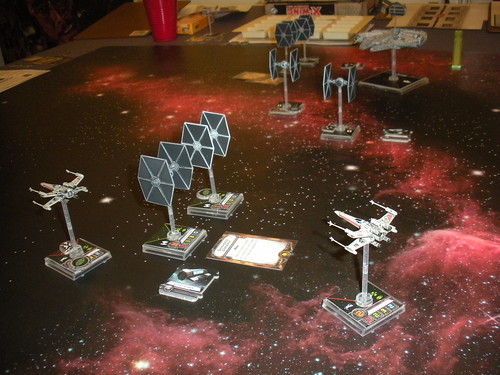 Luke's skills and powers are mostly defensive. However, I was rolling hot with the attack dice and managed to nail Howlrunner's TIE.

"The Force is strong with this one." 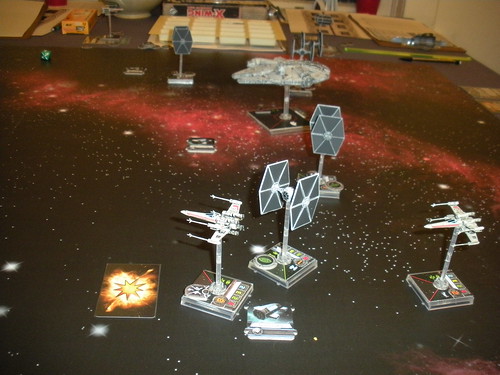 The Millennium Falcon was fighting three TIE Fighters, taking damage, but Brian was able to destroy another Imperial fighter. Meanwhile, the two X-Wings maneuvered to get a Container-escorting TIE fighter in their sights.

"Watch your back, Luke!" 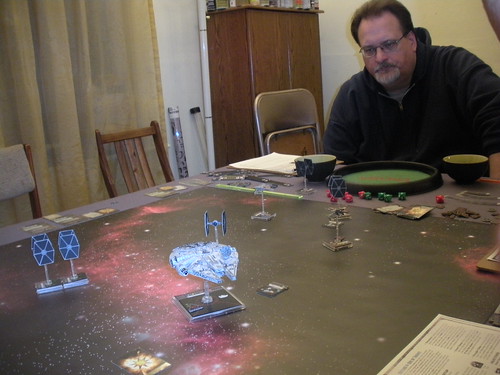 The Imperials would have scored two more damaging hits on the Falcon, but Han spent a Focus and managed to Evade both of them.

"I have a bad feeling about this." 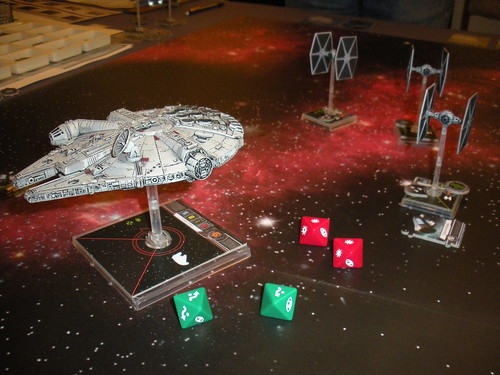 The X-wings destroyed their TIE Fighter, stealing a Container. However, despite using the Chewie card to avoid a critical hit and gain back a shield, the remaining three TIE Fighters ganged up on the Falcon and destroyed it.

"Get to the escape pods, Chewie!" 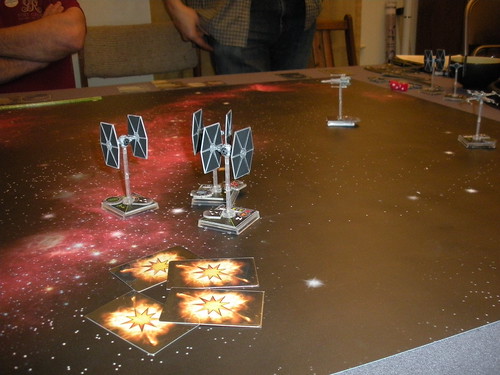 By this point, the Imperials had successfully escorted the two other Containers such that the X-Wings were too far away to intercept them before they exited off the Rebel edge of the mat. In retrospect, after the first TIE Fighter went down, an X-Wing should have peeled off to help out the Millennium Falcon


People seemed to have a fun time, and some of the guys have since picked up ships of their own. The game does have a few limitations. Foremost is the lack of a third dimension. However, and most importantly, this feels like a dog-fighting game. Where was this thing when I was a kid?
Posted by DaveV at 1:49 PM