Another entry for the Analogue Hobbies Painting Challenge - some more members of the 10th Hussars - armed with sabres this time.

The Hussars fought in many of the major engagements in the Sudan, including the battle of El Teb, among others.  The British Cavalry had a rough time of it in the Sudan, often being roughly handled by the combination of unflinching Madhists and broken ground.

The cavalry would also have been involved in countless skirmishes and ambushes along the way between the various battles as they scouted/screened for the infantry columns on the march.  Together with volunteer foot sloggers serving with composite mounted infantry units, the Hussars screened far and wide to keep track of the Madhist troop movements. 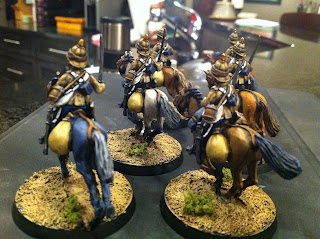 The 10th came over from India to participate in the campaign and still had rather fancy elements of their uniforms, including blue pants and parade spikes on their helmets.  It's a very sharp look as far as I'm concerned.  They will look very nice riding to oblivion on the table.

The Sudan painting will continue as the end of the challenge nears...hope to get a couple more submissions in prior to the deadline.