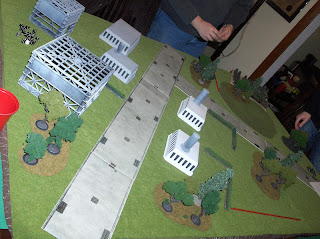 The scenario was simple - Maximum Attrition - basically a kill points mission with VPs awarded for destroying enemy units. I laid out some suitably futuristic looking terrain, I have to say that the small buildings particularly suit what my imagination tells me is the setting for the Slammers stories. 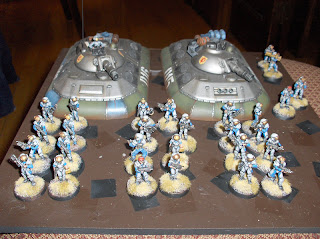 Col. Alois Hammer's Frieslandian mercenaries - two blower tanks, three sections of infantry, a buzzbomb AT team, lead by a lieutenant and his ADC. All rated veterans. 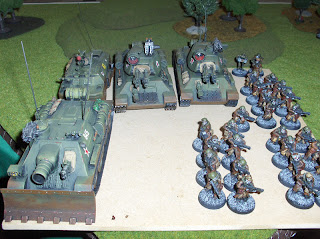 The Zaporovskiye Brigade - two medium tanks, a heavy assault gun, an armoured car with AT missile, and four infantry sections (one not shown here) led by an officer with ADC and bearer bot. All regulars. 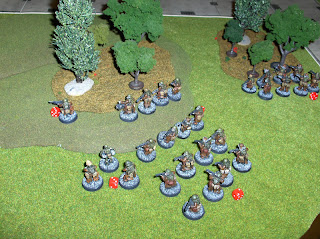 Conscripts Mike F. and Greg took command of the Russian mercs and Conscript Nathan lead the Slammers. Here we see the Z.B. infantry entering the battlefield, this is at top right of the first picture. 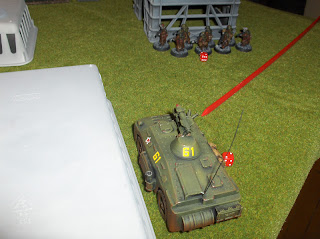 More Z.B. infantry and armoured car enter on the Z.B.'s other flank. 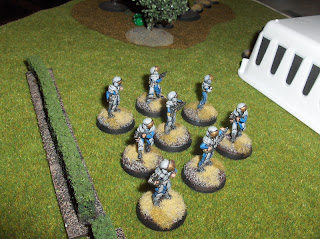 A Slammers infantry section enters near the road. 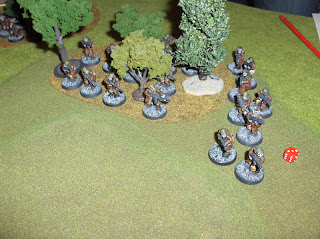 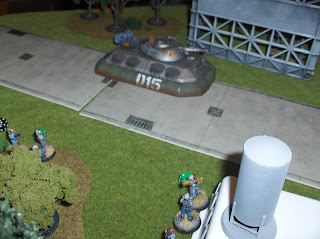 First blower enters play supported by the buzzbomb team, drawing a bead on the armoured car outside of shot. 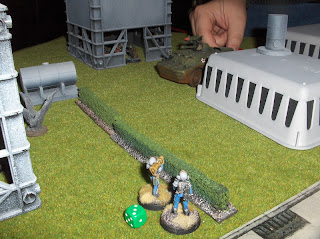 The buzzbombers had to run across the road to get LOS to the armoured car. 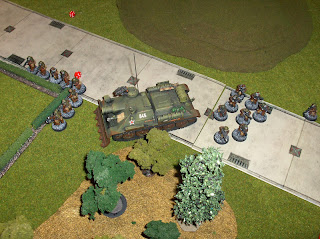 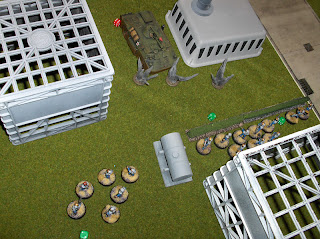 Some buzzbomb shooting at the armoured car deals out Pin markers. The Slammers infantry was engaged in a firefight with some Z.B. troops in the building at top left but wiped them out, taking the position. 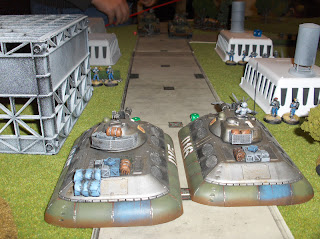 High noon! Blowers square off against two Z.B. tanks on the road. Some epically poor die rolling kept this confrontation going for several turns, ending with one immobilized blower and one destroyed Z.B. tank. 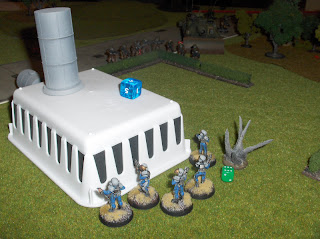 Slammers infantry takes cover behind a building, but too late. They were wiped out by concentrated infantry fire. 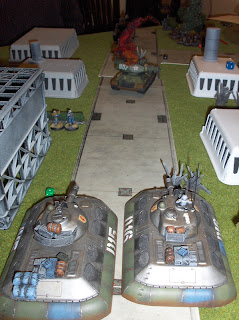 One knocked out Z.B. tank; the other takes evasive action! 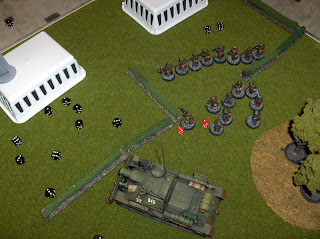 Slammers section is wiped out; assault gun maneuvers to engage immobilized blower from the side. 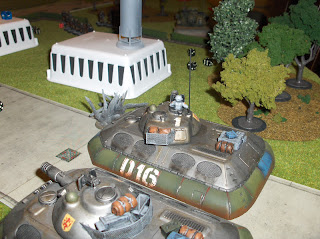 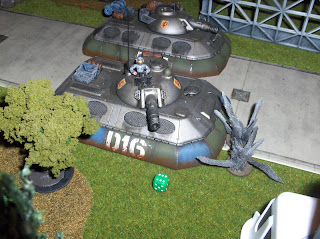 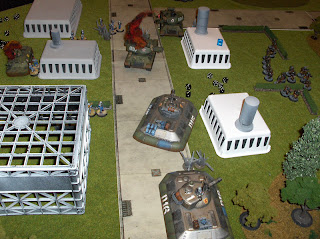 Blower moves up in pursuit of the Z.B. tank... 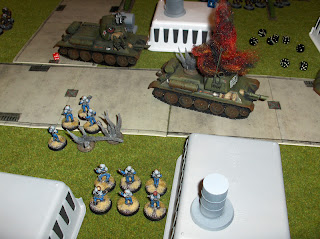 ... which has cleverly moved to hose off infantry while presenting its front to the tank threat.

The game went for six turns, and frankly I expected more carnage, but some die rolling got in the way, as it often does ;-)  As it happend, the Slammers eked out a 4-1 victory by destroying the Z.B. armoured car, a tank, the command group, and an infantry section, for the loss of one infantry section of their own. We used the Bolt Action rules for this one nut I think I prefer our home-grown "Future Krieg" rules for SF - much bloodier. Certainly we'll see the Slammers out again soon, perhaps against the GunSchwarm?

The figs look great and the game sounded fun!

In case you hadn't seen it yet, you might be interested in the Crucible - even if you don't use the specific rules it could be a good HS resource.

Great game, pics and report Dallas! We played a bit of an NHL-style trap in the game with the tanks, but Mike should get credit for covering most of the table with his foot-sloggers. The sniper in particular is now in much better shape...

Thanks for the comments!

@sot - yes, I have a copy of the Crucible, it's a great resource for sure. Problem is I had to get the game on at short notice and I haven't learned the rules in that book yet, so we used Bolt Action rules for the game.