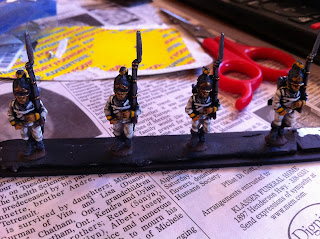 After a summer and early fall in which very, very little painting was accomplished, I am trying to get the motor running again. My painting style revolves a lot around momentum - if I paint one or two figures, I'll probalby do 20 or 30. Moving was very disruptive to this routine, as a number of things I had set aside "so I would not lose them" (decals, dullcote, glosscote, paint brushes) etc. disappeared during the move.

By now I have managed to locate/replace most of the missing stuff, and I am trying to get a few projects from all over the spectrum moving forward. Perhaps because of the lack of output over the past few months, my efforts are even more scattered than usual for me (and that's saying a lot). I'm hoping this little post will serve as a bit of a target list to help get me focused.

My 25/28mm Austrian contingent is off to a good start, but reinforcements are needed. Curt and I are planning to get together in the new year, and I hope to roll out with a newly reinforced brigade. I figure I will need to add four full new line infantry battalions, and a couple more artillery pieces, to create a serious fighting column to stand up to Napoleon's lackeys. 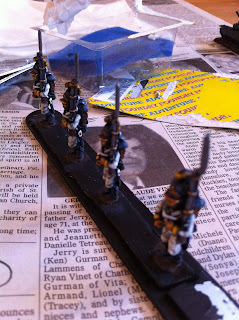 With each infantry battalion clocking in at 38 foot models and one mounted officer, that's a fair chunk of painting - 156 models, I think. On the plus side, however, I've got a fair bit of experience painting Austrian infantry figures, so the job goes very fast. Up first is a battalion of Foundry castings with yellow facings (a picture of the first "stick" is above). I've already finished 19 foot troops and one mounted officer for these guys in just over three weeks.

To shake things up, I will also do a battalion using the new plastic models from Victrix. 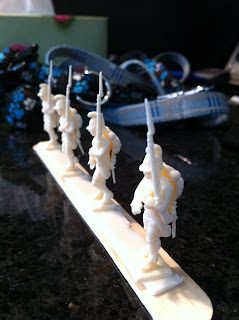 These guys will have light/sky blue facings on their uniforms. I hope to get into more detail regarding the Victrix models on a seperate review post later. Quick verdict: not too bad. A photo of my first "test painted" figure is below. 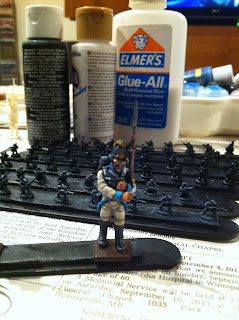 Finally, for Napoleonics, I also need to finish off my unit of Hussars - they are three troopers short of the target complement of 24 models (it's a long story, involving a lot of Foundry rage, problems from the move etc.). That's a ton of painting, but with the election gone and the NFL and NHL in full swing, I should find some time to make major progress.

It's all the rage, and I'm fully infected. I am adding some heavy weapons and more vehicles to my Federal Army troops, and another platoon of Control Battalion infantry.

I'm also doing a "Nova Respublik" force - these are the lastes 15mm sci-infantry from Khurasan, and they are AWESOME. Watch for a product review/progress shots just as soon as I figure out how I will paint the vehicles...

The lads in the Gün Schwarm ranks haven't seem some reinforcements in a long time. While it's been some time since they have confronted the deluded Kommulists on the battlefield, the last encounter, in which several new additions to the FutureKom lineup hit hard, still stings. Adding insult to injury, the Gün Schwarm grunts STILL do not have proper APCs/IFVs...well, stay tuned for a major upgrade to the Gün's fighting mobility, and some improved infantry to boot...

While unpacking during the move, I stumbled across some more un-opened 1/200 Nichimo Regult model kits. Robotech is always a hoot, and another Robotech game very soon would be a blast. If there is one thing a Robotech game could always use, it's more battle pods. Each box has two models, and I have a pair of Zentreadi Battle Pods primed and ready for painting...

Could I possibly do moderns in another scale? Well, OF COURSE I can. After some frustrating test figures from QRF (rapid review - the models SUCK), I have found the "Minifig" line has some great possibilities...stay tuned for some insane project updates on this file in the coming weeks!

So that's that - pretty unfocused, but at least some stuff IS in fact getting painted. I hope to have some more pictures for the blog very soon.
Posted by Greg B at 10:37 AM

You never lose the "know how." It shouldn't take long to get back into the dip and stroke rhythm again. The Nap looks great.

Great stuff, Greg! I can't wait to see these boys in January. Those Victrix models look pretty sweet - too bad they are a bit fiddly to assemble.

Nice work Greg! I think you have officially taken over the "Painting Machine" title!