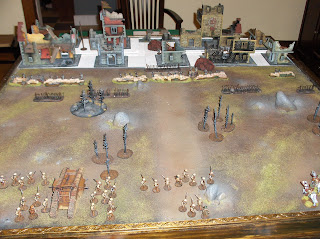 First of all, I have to extend my sincere apologies for the lack of recent updates to the blog. A combination of work, travel and (gasp) non-gaming-related activities has recently conspired to prevent timely updates.  But no more!  I promise I'll try to post more often :-)

Every year around this time I like to host a Great War game to commemorate Remembrance Day.  It's a great opportunity to wheel out the Great War collection and have a game using some neat terrain.  This year I wanted to use my cavalry from Blaze Away! Miniatures and a tank, so that meant a "Hundred Days" battle with the British on the attack! 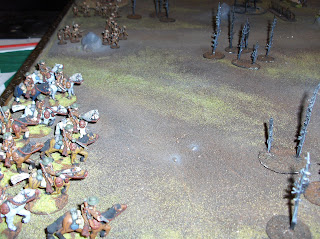 I set up the terrain on the funky little 4x4 table I acquired a couple years back from a local enthusiast who couldn't take it in his family move.  It weighs a ton, but as you can see it is very well made and pretty flexible in terms of gaming period. It was built to represent "Minas Tirith" but the modeler cleverly left the buildings and walls modular, so with a change of accessories it can stand in for anything from Napoleonic to future terrain. 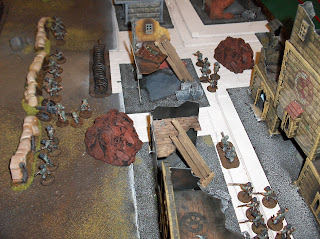 We used the Warhammer "Great War" rules and selected the Blitz mission. The British were the attackers, and had the benefit of "sustained attack", meaning that platoons that were wiped out could re-enter from their table edge to resume the assault. The British have eight plus a variable number of turns to get a platoon into the town. 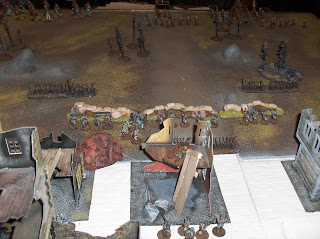 The Germans set up behind the bags with a good-sized mobile reserve to deal with any breakthroughs. 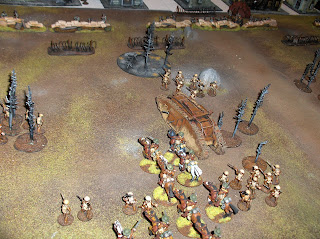 The Mark IV tank rumbled forward for exactly one turn, then was immobilized with a mechanical failure. Such was the state of reliability in the Great War! 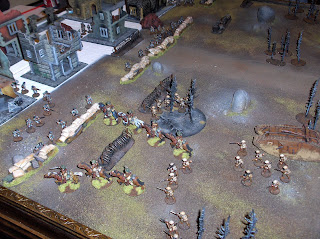 After a couple of abortive starts (i.e. wiped out platoons and regeneration at the start line) the British pressed the attack on their left. 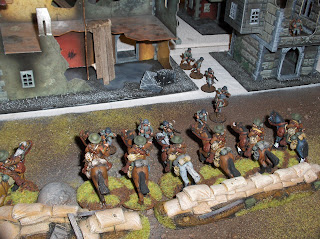 The cavalry charged over the bags and late in the game, looked to have the situation well in hand... 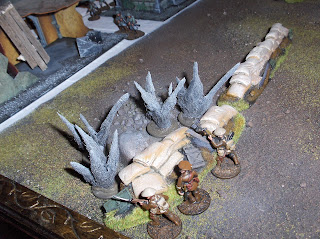 While earlier, the fanatical battalion commander and his command section wiped out the remnants of the German defenders in a bloody assault... 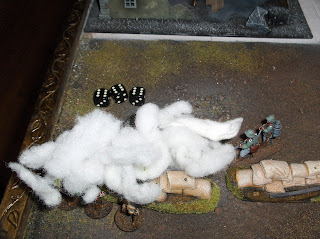 ...only to be barbequed by a flammenwerfer team rushing out from the town. 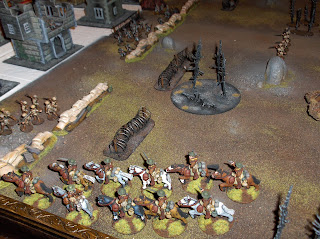 Eventually the press of attackers was too much for the beleagured Germans... 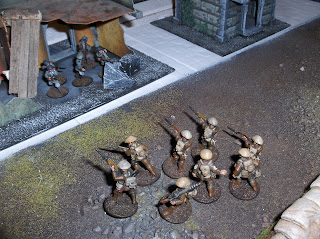 ... but this was as far as the British would get, as time ran out before they could reach the objective.

I like the Great War rules as they use the "Warhammer" engine with which we are all familiar, and the sustained attack rule is brilliant (and essential) when facing dug-in defenders. Eight dice from a Maxim '08 with no saving throw is brutal!

Thanks to Greg, Frederick, Perry and Brian for coming out to push around some lead.
Posted by Dallas at 11:33 PM

Sorry I missed that one. I was working the midnight shift all week. Are you hosting this week? If so, do you want to do Wednesday?

Great game Dallas - we were certainly sweating it o the German side...

Wednesday is OK for me, I think Greg was going to run a FUBAR game... does Weds work for you, Greg?

Sorry guys - Weds doesn't work for me this week...was hoping for Thursday...

Keep Thursday as the plan. I can still come, just have to leave a bit early. No worries.

Excellent - glad you can still make it.

Mike - we'll give you some kind of forward recon with an, er, "expidited role" on the battlefield...