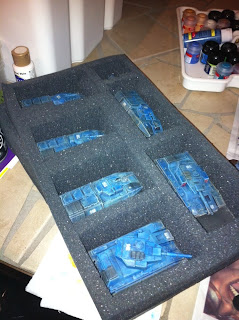 It's been quite a delay - between moving, and then working in the recent Manitoba provincial election, I've painted nary a figure for almost three bloody months! To make matters worse, my 15mm sci-fi stuff had disappeared during the move, wrangled by the packing people. My mistake - setting them aside specifically so they wouldn't be packed. That'll learn me....

Well, democracy has run its course for now and we have unpacked nearly all of our stuff at the new place, including a box from the garage that had the label "Misc. Basement", which included a lamp, a face mask for a hockey helmet, and my 15mm sci-fi stuff! Fortunately the foam carrier (seen in the photo above) protected the painted vehicles from the hockey mask.

I'm hoping the Control Battalion and Federal Army from Khurasan can make their debut on the gaming table this week, as I feverishly try and catch up with the 15mm sci-fi painting frenzy in the group.
Posted by Greg B at 9:13 AM